LOS ANGELES (AP) – There are critical points about the 70th Emmy Awards to keep in mind, starting with this: The ceremony airs Monday.

Typically held on a Sunday, it was punted one day so this year’s host network, NBC, could accommodate its “Sunday Night Football” franchise (New York Giants at Dallas Cowboys, for viewers inclined toward that spectacle).

As for what the 8-11 p.m. EDT awards telecast will offer, the basics are 26 categories with nominees including defending drama champ “The Handmaid’s Tale.” It’s challenged by 2016 winner “Game of Thrones,” which aired outside the eligibility window for last year’s awards and wants a triumphant (please, not blood-soaked) return. 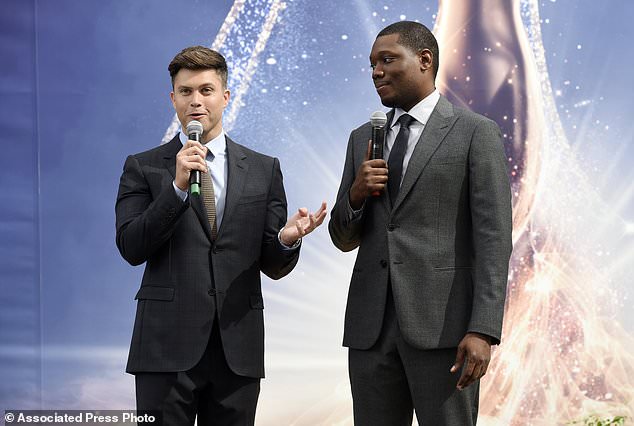 Colin Jost, left, and Michael Che, co-hosts for the 70th Emmy Awards, speak to the media before rolling out the gold carpet outside the Microsoft Theatre, Thursday, Sept. 13, 2018, in Los Angeles. The awards will be held on Monday. (Photo by Chris Pizzello/Invision/AP)

Comedy series including “Atlanta,” ”The Marvelous Mrs. Maisel” and “Insecure” are poised to capitalize on the temporary absence of five-time winner “Veep” and its star Julia Louis-Dreyfus, who nabbed six best-actress trophies.

The late Anthony Bourdain, whose “Parts Unknown” was showered with six awards at the recent creative arts Emmy ceremony that preceded the main event, likely will be remembered.

Here’s more on what to expect from television’s biggest night:

Don’t be surprised if there’s occasional confusion about whether you’re watching the Emmys or a very long episode of NBC’s “Saturday Night Live.”

“SNL” creator Lorne Michaels is producing the awards ceremony. It’s hosted by Michael Che and Colin Jost, who anchor the “Weekend Update” segment of “SNL.” Past and present “SNL” players including Kate McKinnon and Tina Fey are presenters, with McKinnon a nominee along with three other cast members and Alec Baldwin, the show’s regular Trump impersonator.

The long-running sketch show already claimed seven awards at the creative arts ceremony and is up for three more including best variety sketch series Monday. But don’t think “SNL” will hog the stage, according to Jost.

“There will be a lot of people from the ‘SNL’ family involved. But also a lot of people that are just the stars of television now that have nothing to do with ‘SNL,’ because people want to see everyone who’s on TV,” he said.

DID SOMEONE MENTION POLITICS?

Awards ceremonies and politics have become increasingly inseparable, and it’s likely that President Donald Trump will be the subject of a few – OK, more than a few – punchlines and speeches. That could be the best opportunity for a drinking game, with mentions of Paul Manafort for bonus points.

Hosts Che and Jost traffic in political satire on “Weekend Update,” so it’s reasonable to expect they will here as well. But they played it cool before the awards, with Jost saying “there might be some, and there might not.”

“There’s gonna be political jokes. And we’re gonna come out on the wrong side of history, for sure. We’re aiming toward it,” a smiling Che said.

A close-to-home issue likely will be addressed: The sexual-misconduct cloud over the entertainment industry, including last week’s firings of CBS Corp. CEO Leslie Moonves and top “60 Minutes” executive Jeff Fager. If not, the #MeToo movement may have something to say.

The Emmy Awards are opening up wider to diversity, with more than a third of the 101 acting nods announced in July going to ethnic minorities compared to a quarter of the field in 2017.

The 2018 awards are already historic: “Saturday Night Live” host Tiffany Haddish and Samira Wiley of “The Handmaid’s Tale” were part of the first-ever African-American sweep of guest actor awards at the creative arts awards.

The main event Monday could advance inclusivity on-screen and off. Donald Glover, the star and creator of “Atlanta,” won trophies last year for acting and directing and is a multiple nominee again, including for writing.

Tracee Ellis Ross of “black-ish” and Issa Rae of “Insecure” are competing for comedy series acting honors. On the drama side, Brown could repeat as best actor for “This Is Us,” with Jeffrey Wright of “Westworld” also competing. Latino actors up for honors include Ricky Martin, Penelope Cruz and Edgar Ramirez, all for “The Assassination of Gianni Versace: American Crime Story.”

Sandra Oh has the chance to become the first performer of Asian descent to win a lead drama actress trophy – a victory that would coincide nicely with the landmark box-office success of “Crazy Rich Asians.” The Korean-Canadian is nominated for the spy thriller “Killing Eve” after receiving five supporting actress nods for “Grey’s Anatomy.”

A streaming service or basic cable series has yet to win top comedy, something that FX’s “Atlanta” or Amazon Prime Video’s “The Marvelous Mrs. Maisel” could change.

Issa Rae of “Insecure” or “black-ish” star Tracee Ellis Ross could become the second African-American to win as best comedy actress, following Isabel Sanford (1981, “The Jeffersons”) by 37 years – and making for a 21st-century first.

“The Assassination of Gianni Versace” star Darren Criss, of Filipino descent, could become the second Asian-American actor to claim an acting award after Riz Ahmed’s win last year for “The Night After,” a notable back-to-back outcome if it happens.

RUNNING UP THE SCORE

A supporting drama actor win for Peter Dinklage of “Game of Thrones” would put him at three in the category and tied with Aaron Paul, which he earned for “Breaking Bad.”

“Saturday Night Live” holds the record for most awards in Emmy history, 71, and could add as many as three more Monday. With no end for the show born in 1975 in sight and closest competitor “Game of Thrones” (45) ending after its upcoming eighth season, it’s likely “SNL” is the king now and forever.

Lynn Elber is a national television columnist for The Associated Press. She can be reached at lelber@ap.org and on Twitter at http://twitter.com/lynnelber . 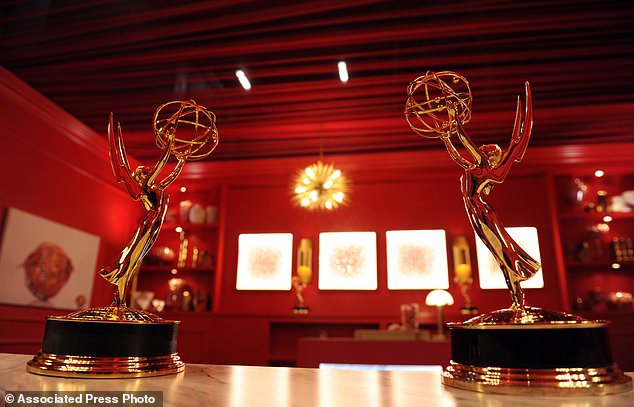 FILE – In this Sept. 13, 2018 file photo, Emmy Award statuettes are displayed inside the Lindt Chocolate Lounge inside the Microsoft Theatre in Los Angeles. The 70th Emmy Awards will be held on Monday. (Photo by Chris Pizzello/Invision/AP, File) 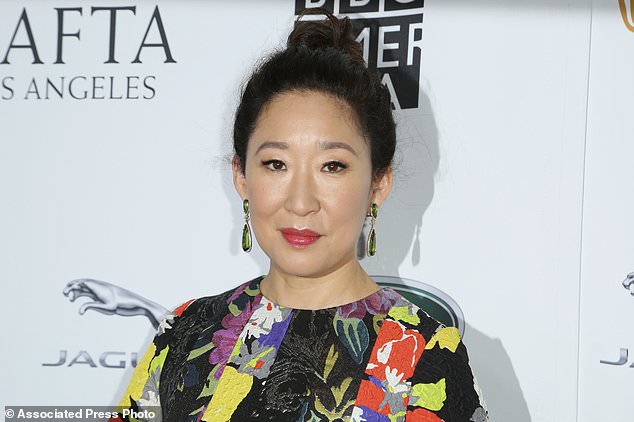 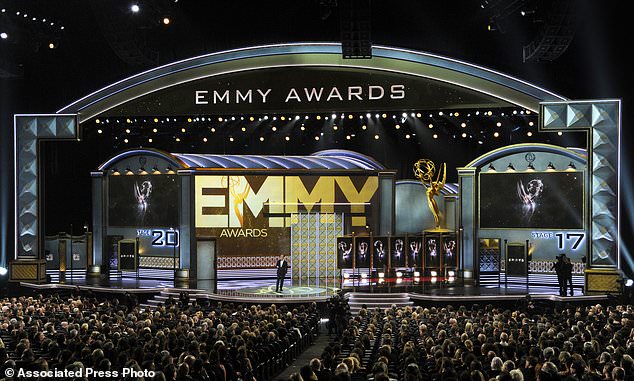 FILE – In this Sept. 17, 2017 file photo, host Stephen Colbert speaks at the 69th Primetime Emmy Awards in Los Angeles. The 70th Emmy Awards will be held on Monday. (Photo by Chris Pizzello/Invision/AP, File)

Dodgers rally to beat D-backs 3-2, Jansen earns 33rd save
Saudi Arabia admits critic Khashoggi killed in Istanbul...
Causing an uproar: Lion-car combo the latest in selfie
1 in 4 doctors 'have suffered mental health issues' as stresses of the job can lead to depression
At least 12 injured as two cars smash into spectators in Stevenage
Mother, 50, says she is often mistaken for her 17-year-old son's sexy SISTER
Virginia declares state of emergency as Hurricane Dorian approaches the East Coast
Teenager, 18, is locked up for life for murdering his ex-girlfriend Ellie Gould, 17