A chilling video of toddler climbing over a gate to enter a swimming pool has been shared online as a warning to other parents.

The mum posted the video showing her three-year-old son using the ladder from their trampoline to help scale the fence and get inside the family’s swimming pool.

The tot lifts the ladder from the trampoline above his head as a small girl watches on. He leans the small ladder against the metal fence and begins to climb.

‘Step one, step two, step three,’ he can be heard saying, before lifting a leg over to the other side of the fence.

The video, posted to the Facebook group ‘Perth Having a whinge’ has shocked other parents.

‘Never underestimate what a kid can do. They are at least five steps ahead of you…vigilance,’ another person commented.

‘OMG kids are so clever. My 2 youngest kiddies tried to use a chair, they both got a smack on the bum and wasn’t allowed outside. They both soon learned.’

A 2017 report from the Royal Life Saving Australia about children under five drowning in private swimming pools found that 29 children aged 0-4 years drowned in Australian waterways over the preceding twelve months, with 10 of these deaths occurring in NSW. 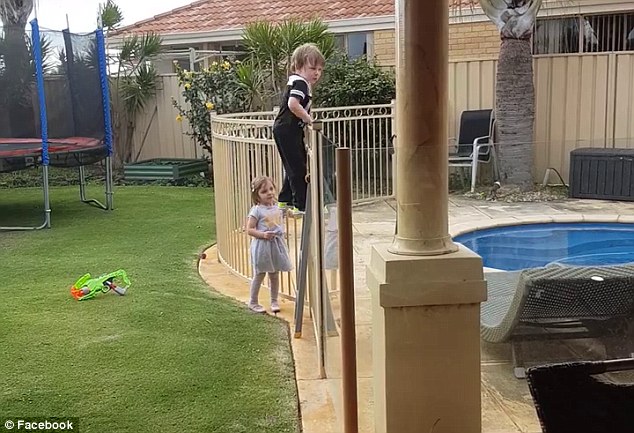 The 3-year-old boy was caught by his mum on camera. His mum posted the shocking video on social media to warn parents of the risk of not watching kids near water

Children under the age of five are at the highest risk of drowning, with home swimming pools a common location for fatalities, the report states.

Lack of appropriate supervision was deemed the main factor, the report said.

However, a fifth of the pools where children had died were not fenced.

New questions over who leaked Christine Ford's explosive accusation of Brett Kavanaugh
Outrage over chow-chow puppy Bungle locked up for biting a policeman
Comedian Jeremy Hardy dies of cancer aged 57
JAMES KIRKUP: Is Britain FINALLY coming to its senses over transgender madness?
Nigel Farage discussed no-deal Brexit with Donald Trump when he met US President face-to-face
William Blake was a nudist obsessed by sex who talked to angels for inspiration
HARRY COLE: What happens if Boris Johnson loses his seat?: The secret plan to counter the scenario
Harry and Meghan will LOSE HRH titles and will REPAY £2.4million of public cash