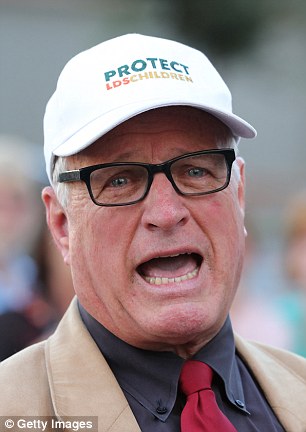 A Mormon man who led a campaign criticizing the church’s practice of allowing closed-door, one-on-one interviews of youth by lay leaders that sometimes included sexual questions has been kicked out of the faith following a disciplinary hearing.

Sam Young read a verdict letter for the first time Sunday that had been delivered to him following last week’s hearing with local church leaders in Houston.

Young and his supporters say the interviews where youths are asked if they’re following the law of chastity led to inappropriate conversations and shaming.

Young called his excommunication ‘a supreme disappointment’ and was emotional at a news conference attended by about 100 of his supporters.

‘The whistleblower has been kicked out,’ he said.

‘But they have no power to excommunicate me from the cause of protecting children and protecting the healing of my friends. For our children’s sake, this whistleblower is not going to stop roaring.’ 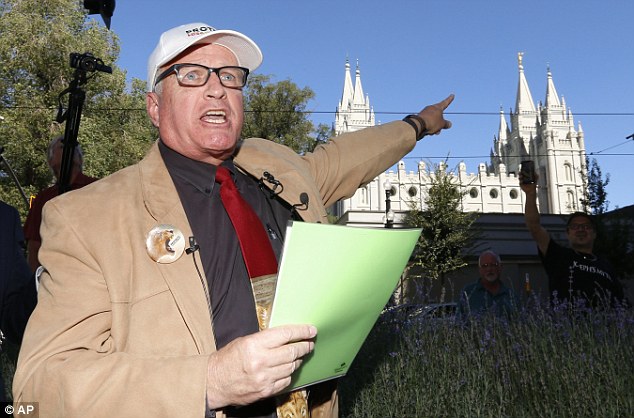 Young called his excommunication ‘a supreme disappointment’ and was emotional at a news conference attended by about 100 of his supporters. He is seen above in Salt Lake City on Sunday

Young, 65, recently finished a 23-day hunger strike in Salt Lake City near church headquarters to bring attention to his cause.

In March, he organized a protest march of about 1,000 people who walked to church headquarters.

While not a lifelong ban, excommunication is a rare move that amounts to the harshest punishment available for a church member. 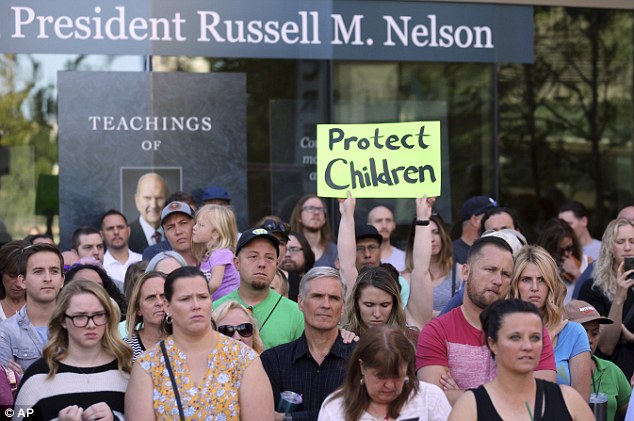 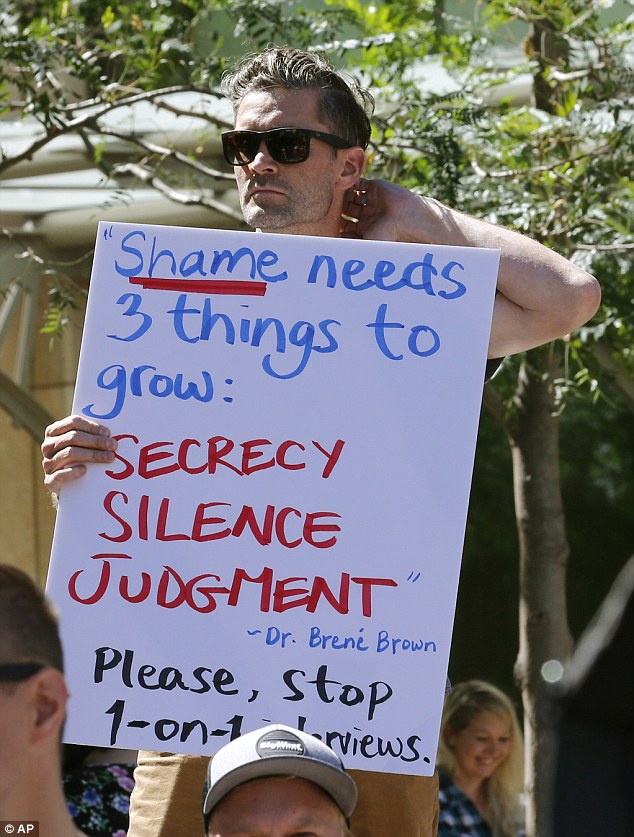 A supporter holds a sign during Young’s news conference

Young becomes the third high-profile Mormon who led protests about church policy to be excommunicated in recent years.

Kate Kelly, founder of a group pushing for women to be allowed in the religion’s lay clergy, was excommunicated in 2014.

John Dehlin, who runs a podcast that allows doubting Mormons to tell their stories, was kicked out in 2015.

In his summons to the disciplinary hearing, church leaders told Young he was facing excommunication because he encouraged others to vote against church leaders and because he organized more than one public action that expressed opposition.

The youth interviews usually happen twice a year starting at 12. One of the questions asked by men who are called bishops deals with sexual activity: ‘Do you live the law of chastity?’

Young and the Mormons and non-Mormons who back his campaign say the question is unnecessary and inappropriate.

The church changed its policy earlier this year to allow children to bring a parent or adult with them.

Parents were only allowed in a hallway or adjacent room under old rules. Youth can still go in alone if they choose.

In June, the faith, for the first time, posted the list of questions lay leaders are supposed to ask during the interviews.

Mormon leaders say the interviews are an important way for bishops to get to know youth better and determine their religious habits and obedience to God.

Young’s ouster means he’ll be leaving a religion he’s been a member of his entire life.

Mormons usually have tight-knit connections with other people in their congregations, bonds forged by spending worship and social time together.

Excommunicated Mormons and those not in good standing can’t go inside temples where members are married and other ordinances such as baptisms for dead relatives are performed.

America's 'most needed deadbeat' dad is sentenced after owing greater than $534Ok in baby help
Lego-obsessed family spend 235 HOURS building an eight-foot-tall Christmas advent calendar
Are YOU too smart to fall for an online scam? Google quiz tests if users can spot phishing emails
Michael Jackson accuser ‘says singer bought the Neverland for him
Trump pushes trade deal, says it's 'probably appropriate' for Japan to buy more military equipment
Wooden Melania Trump statuep erected in Slovenia - but locals complain it looks like a 'Smurfette'
Former US Navy Secretary who clashed with Trump over Navy SEAL Eddie Gallagher endorses Bloomberg
Man 'tried to set his wife on fire after learning when he wouldn't get a coronavirus stimulus check'