has vowed not to rest on his laurels despite tightening his grip on the world championship with a commanding win in .

Hamilton heads into the concluding six rounds of the season with a 40-point lead over Sebastian Vettel, who finished only third at the Marina Bay Street Circuit on Sunday.

The slow-speed temporary track was expected to be a bogey venue for Mercedes, but Hamilton’s brilliant pole lap in qualifying paved the way for victory. 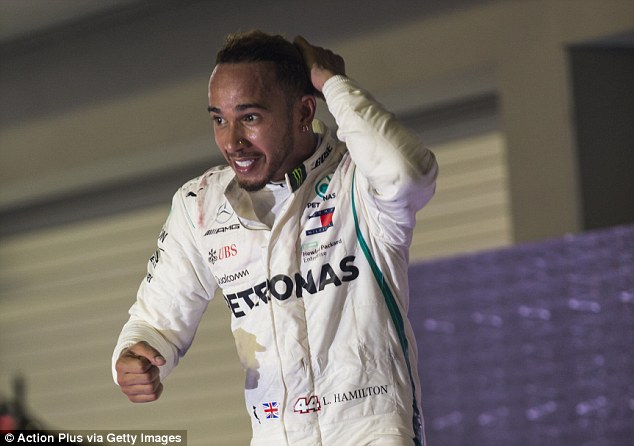 On a superb night for Hamilton, Red Bull driver Max Verstappen finished ahead of Vettel following a curiously premature pit stop by Ferrari.

Hamilton, who heads to Thailand for a sponsorship commitment on Monday before taking a couple of days off, is now the overwhelming favourite to claim his fourth championship in just five years – but the 33-year-old Briton insisted he will not be taking his foot off the accelerator with 150 points still on the table.

‘I’ve been here a long, long time so I know I can’t get ahead of myself,’ Hamilton said. ‘We have to continue to remain humble and just keep working as hard as we can.

‘Right now, I just feel, job done and I’m really happy with it, but there are still lots of points available.

‘With this performance, and this focus that we have as a team, I truly believe that we can deliver impactful weekends like this for the rest of the season. That is our goal.’ 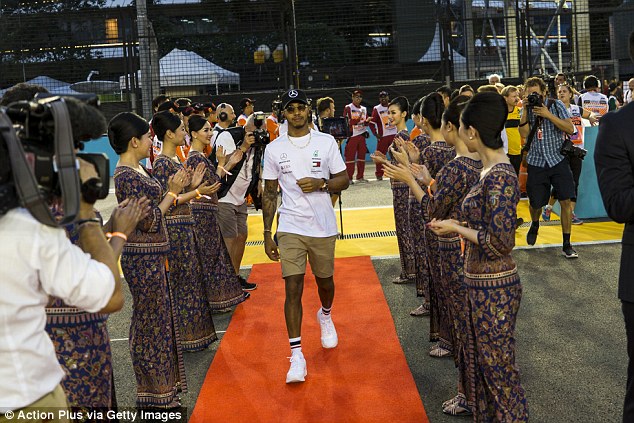 On his arrival in Singapore, the 33-year-old batted away suggestions that the promotion of his debut Tommy Hilfiger fashion collection in Shanghai and New York – a journey that saw him rack up a staggering 25,000 air miles in just 10 days – was something of a gamble. Here, on Sunday, he was vindicated.

‘I know there were questions at the start of the week as to whether these things outside of Formula One are a distraction to me,’ Hamilton said.

‘I came here, and I thought, “Jeez, if I put one foot wrong, people are going to point to the things I do as a result of it”, but you can see that it doesn’t affect my performance and, if anything, those things add to the performance. The last two weeks have been intense so I am looking forward to a couple of days off.’

This was supposed to be a Ferrari circuit, but Vettel will leave the Far East staring down the barrel at another title defeat to his relentless rival.

He added: ‘Lewis said he didn’t expect to come here and gain 10 points and we didn’t come here expecting to lose 10 points, but there is still a long way to go.

‘Our car is working pretty much everywhere so there is no need to be afraid about what is coming.’

West Ham hope they'll signal Bernard on free switch
Willian v Martial: Would Chelsea or Man Utd get higher of £75m swap?
Robben insists transfer to Bayern from Actual Madrid was finest determination of profession
Woodward should not be shocked, he received what he paid for in Mourinho
Manchester United: The resurgence of Luke Shaw
Alan Shearer lays into 'embarrassing, hopeless, pathetic' hosts as they slip up again
'It's a blow to your happiness': Luis Suarez bemoans impact of VAR
England stars in high spirits as Ben Chilwell and Demarai Gray train with squad ahead of Switzerland