is very much a household name — but as it turns out, the name everyone is saying is wrong.

The 32-year-old star shocked many of her 10.7 million followers this week when she tweeted that nearly everyone mispronounces her name.

Though most people say it as ‘tee-gan,’ the correct way to say her last name is actually ‘tie-gen’.

Say what? Chrissy Teigen revealed on Twitter that everyone is pronouncing her name wrong, in response to this Twitter user who knows the right way to say it 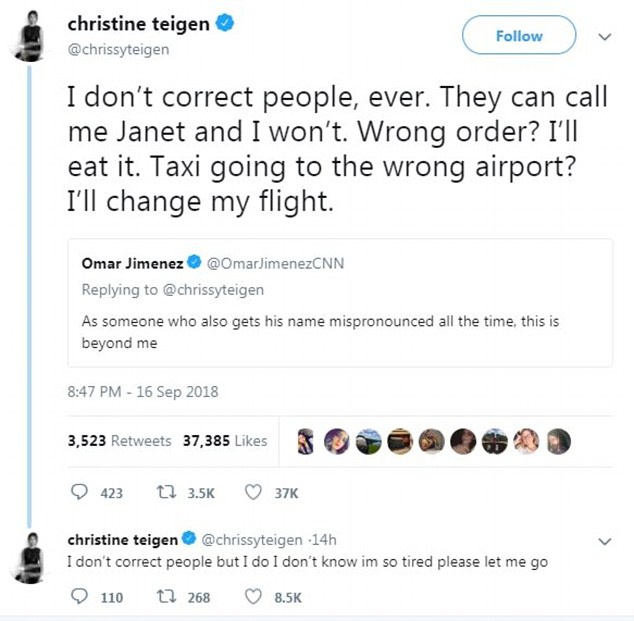 That’s your name now: She admitted that she gave up on correcting people and it’s just stuck

At least one Twitter user knew the truth, writing on Sunday: ‘Well we pronounce @chrissyteigen’s name wrong all the time.’

Chrissy noticed the tweet, replying: ‘word! gave up a long time ago. last name is tie-gen not tee-gen.’

The revelation blew her followers’ minds, with many wondering why she hasn’t set the record straight before.

Chrissy seemed to indicate that it just got too tiresome, so she gave up.

‘I don’t correct people, ever. They can call me Janet and I won’t. Wrong order? I’ll eat it. Taxi going to the wrong airport? I’ll change my flight,’ she wrote. 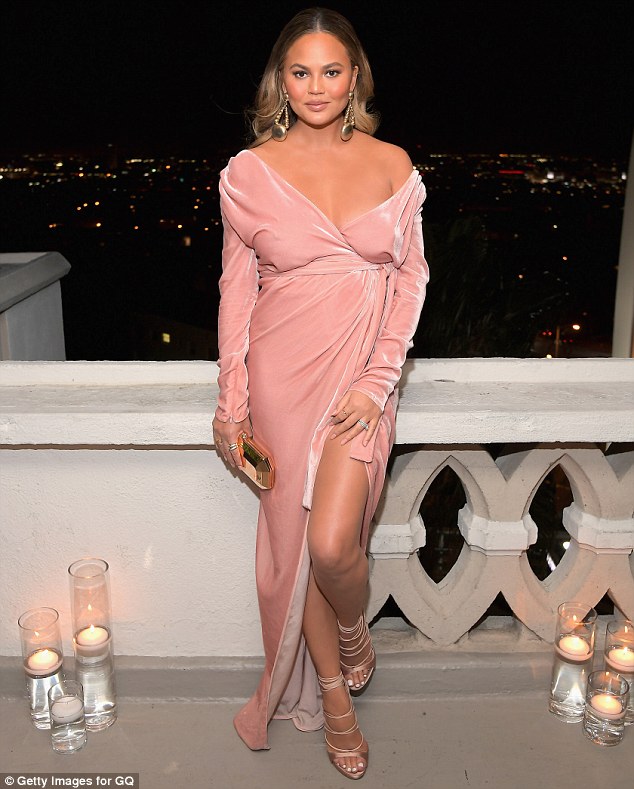 Converted: Chrissy even says ‘tee-gan’ herself these days 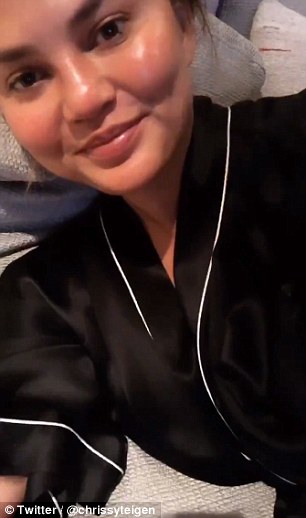 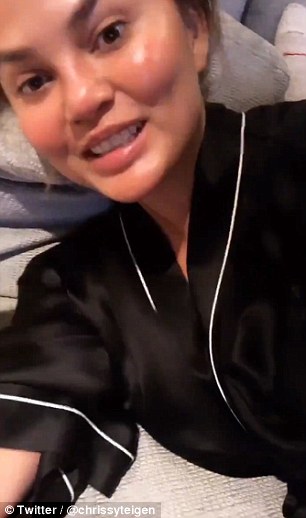 See! She shared a video in which she had her mother confirm the right way to say it 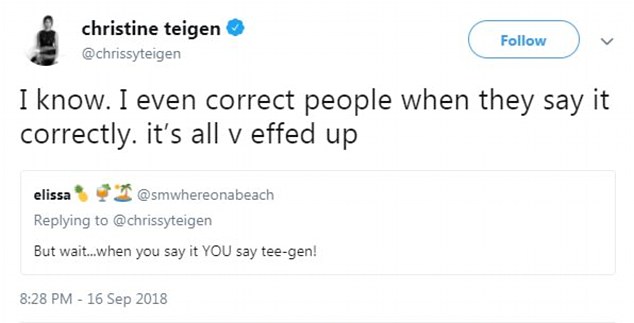 Full switch: At this point, she even finds herself correct the people who say it the correct way

When another Twitter user pointed out that Chrissy even says ‘Teigen’ when she talks about herself on TV, she explained that she’s pretty much resigned herself to it at this point.

‘I know. I even correct people when they say it correctly. it’s all v effed up,’ she said.

She also posted a video of herself saying it, and asking her mom in the background to confirm that ‘tie-gen’ was right.

What’s more, it seems Chrissy isn’t the only superstar whose name everyone says wrong.

No way! While talking about whether or not to take fiance Pete Davidson’s last name, Ariana Grande revealed on a last month that her family has always said her last name as ‘grann-dee’

She linked to a clip from a Beats 1 interview from August, in which Ariana is talking about whether or not she’ll take Pete Davidson’s name once they get married.

She says she’ll likely hyphenate, and admits she doesn’t want to give up Grande, for her grandfather — except she pronounces it not like the Spanish word, but ‘grann-dee’.

‘My grandpa said Gran-DEE. Gran-DEE was kind of the Americanized version of it, made it more chill,’ she said.

‘And then my brother was like, we should say Gran-DAY. It’s so fun to say it. It’s a funny name. I grew up saying Gran-DEE and I think of [my grandpa] and I wish I said Gran-DEE more.’