A number of Premier League clubs have been accused of providing inflated figures for their attendances.

A report by the BBC claims that last season West Ham quoted numbers a staggering 22 per cent higher than the number of fans passing through their turnstiles, while Manchester City were second highest on 14 per cent.

The figures have emerged after the BBC sent Freedom of Information requests to the relevant police forces and local councils for all 20 Premier League clubs. 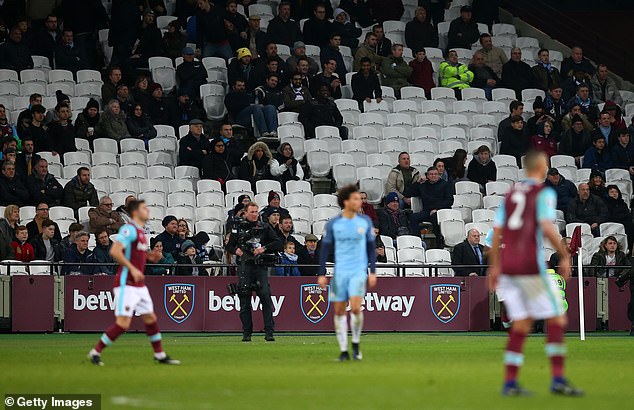 And while they received only eight responses in relation to seven clubs, six of those exposed glaring differences in the numbers published and provided officially by the authorities.

On Wednesday, the clubs that were contacted by Sportsmail declined to comment publicly but reacted with some frustration, claiming there was nothing wrong with quoting ticket sales — rather than actual bums on seats — for their attendance figures.

There are certainly no rules on which numbers they chose to quote publicly, as the Premier League confirmed on Wednesday.

The clubs tried to question the validity of the BBC report when they had only gathered data for seven clubs and for a limited number of games at each club. West Ham and Manchester City’s figures were based on 12 games, while Watford’s data was based on only four.

But exactly why these clubs quote ticket sales figures when they do not match attendance numbers was something clubs struggled to explain, even when giving off-the-record briefings. 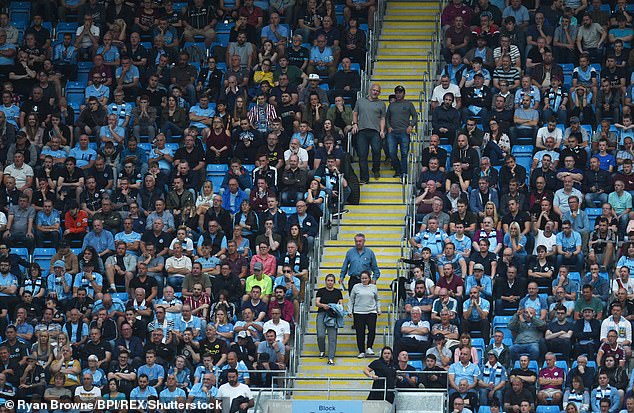 Manchester City were found to have added an average of 7,482 to their attendance figures

As Sportsmail discovered, 75 per cent of the Premier League clubs this season use a computerised access control system provided by a company called Fortress, with West Ham among their clients.

West Ham generally announce their attendance figures during the second half and use the number based on ticket sales.

But one director of another Premier League club who use the Fortress system told this newspaper that they receive a ‘report’ from the company midway through the second half of every home game that provides them with the accurate attendance figure based on the number of tickets actually scanned on entry to their stadium that day.

They then quote that number on the stadium public address system during the match and in the next game’s match programme. 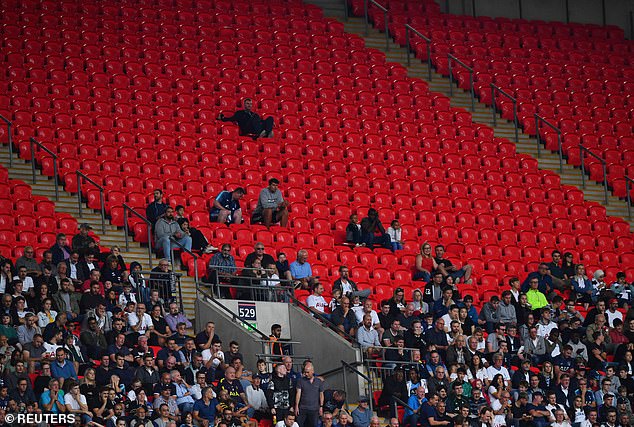 Asked why clubs might use the higher ticket sales figure, the director — who is involved in raising sponsorship revenue for their club — suggested it was simply about ‘perception and brand image’.

‘If you quote higher attendance figures it obviously gives the impression that you’re a bigger club,’ they said.

‘And while television money amounts to roughly 70 per cent of the revenue for Premier League clubs, it could also help boost sponsorship revenue. If you can tell a potential sponsor you’ve got, say, two million sets of eyes on your shirts over the course of a season, that might help when it comes to negotiating.’

The difference in the figures is generally caused by the fact that season-ticket holders do not necessarily attend every match, and in West Ham’s case by what has proved a difficult 12 months at the London Stadium.

The FA often announce attendance figures at England matches based on ticket sales when it is clear that many of the seats secured by debenture holders are empty. They too use the Fortress system at Wembley. 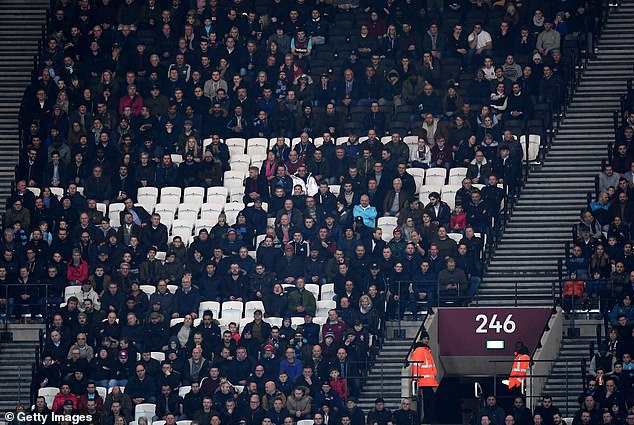 At one match, figures from the FOI said the crowd was 17,523 lower than West Ham had said

Many clubs are the same, even if the BBC research revealed that there was no disparity between the figures quoted by Manchester United and those provided by the authorities. United seem to operate at 98 per cent capacity at Old Trafford and clearly see no reason to instead quote ticket sales.

West Ham would probably point to the fact that they have 50,000 season-ticket holders, of whom 10,000 are juniors who may struggle to attend midweek games.

They have launched an initiative to address the issue, with the parent of a junior member allowed to upgrade the ticket for only half the price of a normal ticket in a bid to get more people in the ground.

In the last two years they have also joined a number of clubs in introducing a ticket-exchange scheme, encouraging supporters to resell their tickets on an official platform in a bid to get more bums on seats and so create a better atmosphere. It appears to be working, with the actual attendance for their recent home game with Bournemouth apparently closer to 50,000.

The BBC did not receive figures for Arsenal but the official average was 57,054 at Emirates Stadium last season, with the capacity 59,867. The Arsenal Supporters’ Trust told the BBC, however, that the actual average attendance was about 46,000. The BBC say the club disputed the figure, even though it was clear attendances had dropped towards the end of Arsene Wenger’s final season in charge.

The Football Supporters’ Federation told the BBC that there is ‘an issue of transparency’ if clubs only release data on tickets sold.

‘If clubs know the actual number of fans through the turnstile, rather than the number of tickets sold or given away, then there’s no reason they shouldn’t publish that figure,’ they said.

Paul Turner of the West Ham United Independent Supporters’ Association told the BBC that the figures amounted to ‘fake news’ and a ‘face-saving operation’ for the club’s owners after what has been a difficult move to their new home.