A rare brown-and-white male panda has been arranged to mate with a female panda by Chinese scientists who hope to find out what gives him his special fur colour.

Experts in ‘s Qinling Giant Panda Research Centre said they had picked a ‘super experienced’ partner for nine-year-old Qizai, which had never mated before.

Qizai is the only brown-and-white panda in captivity in the world and his unique coat has left experts baffled for years. 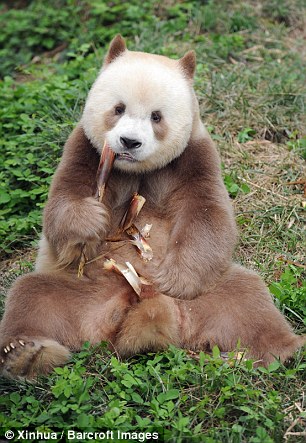 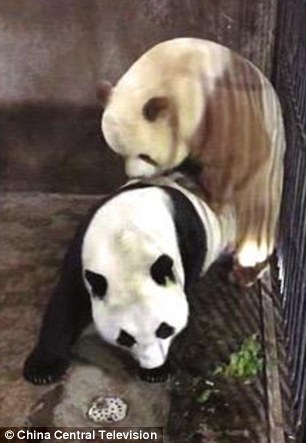 Nine-year-old Qizai, which has a unique colour of brown and white, has been arranged to mate with 18-year-old female panda Zhu Zhu. Zhu Zhu had been a mother four times since 2008

Qizai, about 27 in human years, is said to be in an opportune age to mate. Scientists described him as ‘strong’, ‘active’ and ‘full of energy’.

Experts had spent months trying to choose an ideal partner for Qizai. They finally decided on 18-year-old Zhu Zhu, which had got pregnant twice through natural mating and had been a mother four times since 2008.

Zhang Danhui, a researcher at Qinling Giant Panda Research Centre, told : ‘The female panda must be very cooperative and have good stamina. Only then could she attract the male panda to mate successfully.’

Scientists said Zhu Zhu had ‘excellent genes’. They added that she was ‘healthy and as energetic as any younger female pandas’. 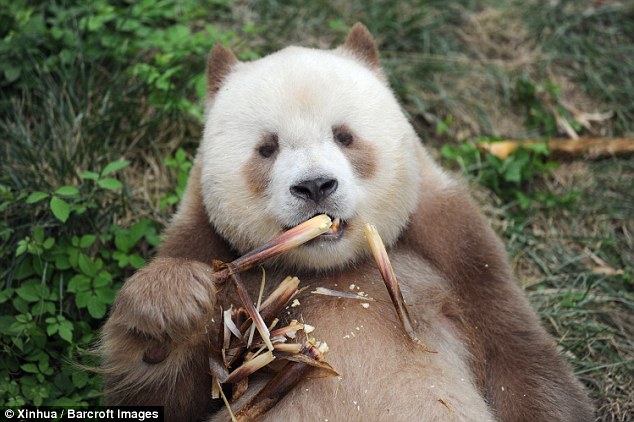 Qizai was found as a two-month-old cub, weak and alone, in China’s Qinling Mountains 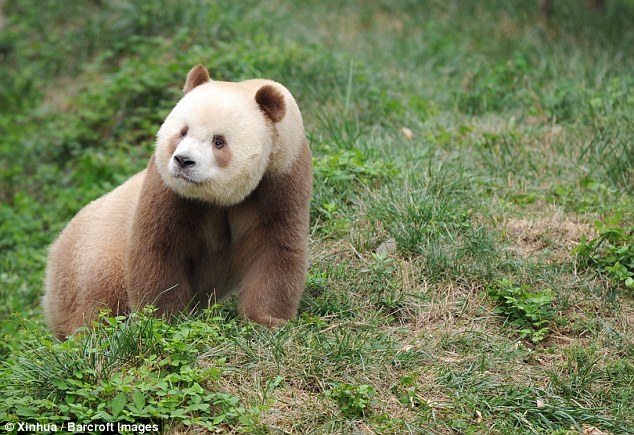 China Central Television Station said Qizai and Zhu Zhu were brought to stay in two neighbouring enclosures in Qinling Giant Panda Research Centre in late June after Zhu Zhu had started to show signs of being in season.

A female panda is in heat only once a year for 24 to 72 hours, which is why it is so hard to have baby pandas.

Scientists hoped that by staying next door, the two pandas could get familiar with each other before being put to mate.

When experts confirmed that Zhu Zhu was in heat through a hormone test, they brought Qizai and Zhu Zhu into the same cage to mate. 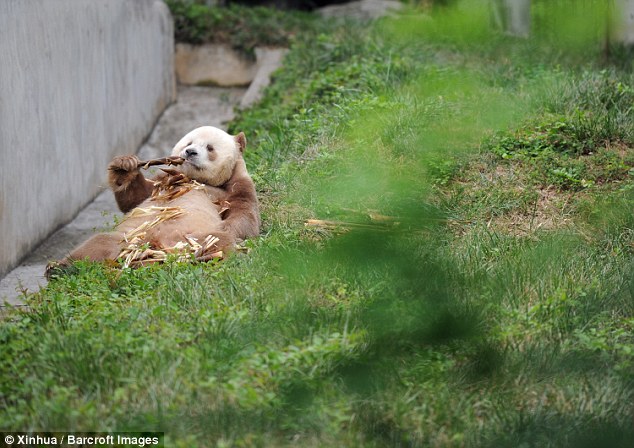 However, researcher Zhang said the process wasn’t successful because Qizai was ‘inexperienced’.

He told China Central Television Station: ‘He tried many times, but failed.’

In order not to miss the brief window to get Zhu Zhu impregnated, scientists carried out artificial insemination on the couple.

They are expected to find out if Zhu Zhu is pregnant at the end of this month.

If the artificial insemination is successful, experts said the colour of Qizai’s cubs could provide them with a clue to understanding what has caused some pandas to be brown and white.

Where do brown pandas live? 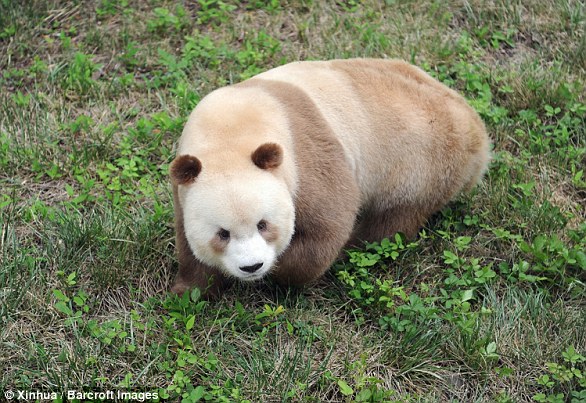 China’s Shaanxi Province is the only place in the world where brown-and-white giant pandas have been spotted.

Only 10 sightings of brown pandas have been recorded, and all of them took place in the central Qinling Mountains.

Qizai, whose name means the ‘seventh son’, was rescued as a cub at two months old in the wild after apparently being abandoned by his mother.

He was previously thought to be the only living brown panda in the world until a wild panda with the same colour pattern was spotted roaming in a nature reserve in Shaanxi in March, 2018.

The Qinling Mountain pandas are considered a different sub-species from the pandas found in other mountain ranges – namely in south-west China’s Sichuan Province and north-west China’s Gansu Province.

A new panda research base, Qinling Giant Panda Research Centre, was established in 2018 to study pandas from the Qinling Mountains.

Based in Xi’an, the capital of Shaanxi Province, the centre’s main goal is to decode brown pandas’ special hair colour.

Australian parents raising their children vegan - despite diet being bad for kids’ bones
Delhi boasts that its clampdown on protests in Kashmir has been a success because 'no-one was shot'
Dozens of Sidney Poitier's family in the Bahamas are missing in aftermath of Hurricane Dorian
Time to stop being afraid of the dark... for the sake of our health, mood and waistbands
Macy's Thanksgiving parade: Ronald McDonald balloon deflates
Biden laughs off that he represents the 'establishment' that's trying to crush Sanders' campaign
Two LA Lakers players and three Philadelphia 76ers stars are confirmed to have coronavirus
Waterpark comes included with this $7.9million Florida home that boasts its own lighthouse