From her very first royal engagement in December 2017, has been poised and confident in the limelight – but lately she’s been careful to ensure her star power doesn’t eclipse her husband.

According to body language expert Judi James, the former Suits star 37, initially seemed to have the upper hand, dominating the conversation in their engagement interview.

However, since becoming a member of the royal family in May when she married she realised that ‘a constant scene-stealing trait from Meghan could have alienated the public and her husband’.

She’s started using techniques such as standing slightly behind Harry at events and allowing him to ferry her along when they’re holding hands.

‘All successful marriages are based on finely-tuned and often fluctuating power signals that form a complimentary ‘fit’ for the couple,’ Judi told Femail. 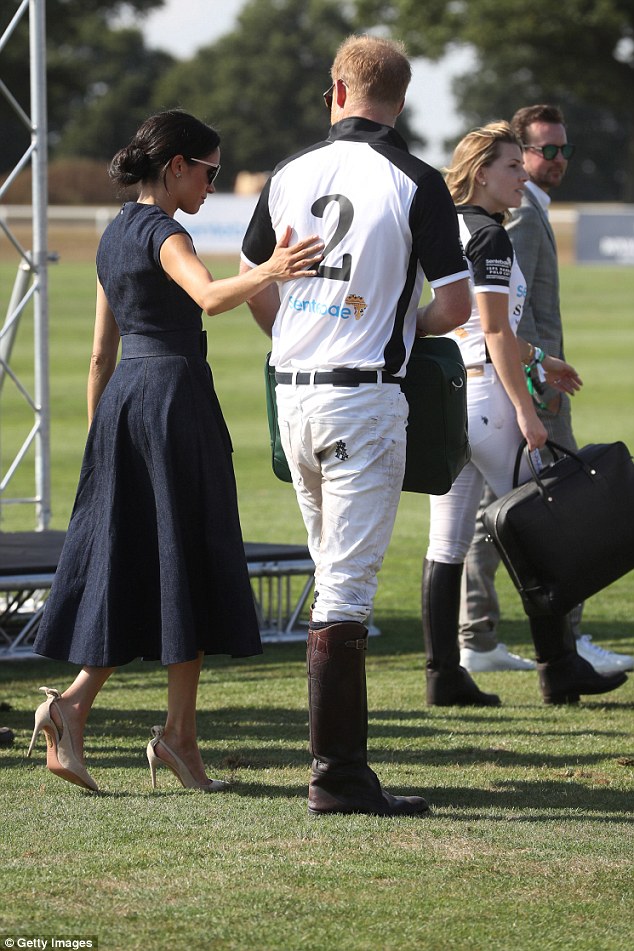 When Meghan and Harry’s engagement was first announced the power was firmly in the former Suits star’s hands.

‘Meghan arrived in the UK as a confident, eloquent, grown-up bride-to-be with a glittering Hollywood career on her CV,’ Judi explained.

‘She campaigns for women’s equality and quite clearly had a far more professional approach to all the press attention and interviews than her new husband.

Right from the very start we could see during their engagement appearances that it was Meghan controlling, leading and reassuring Harry via gestures like arm-rubs, pats and other subtle tie-signs.

She sat to the front during their TV interview, often dominating the conversation as Harry gazed at her like a man who couldn’t quite believe his luck. 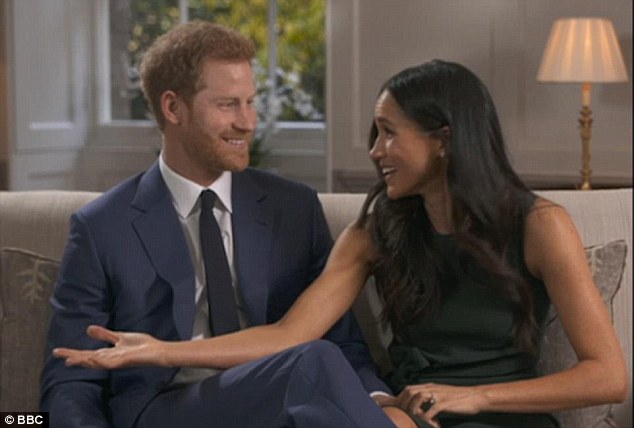 During their engagement interview in December 2017, Meghan had the upper hand and took the lead in the conversation

‘Once they were married though royal protocol kicked in, while a constant scene-stealing trait from Meghan could have alienated the public and her husband,’ Judi explained.

‘Unlike his dad, Harry is a loveable royal star with his own strong fan base. He’s also served with the military so taking a more compliant role might have caused ego and status problems.’

Canny Meghan appears to have adjusted her body language accordingly to subtly avoid upstaging Harry during their joint appearances.

‘Meghan’s very smart answer to all these complex pressures seems to be to push her husband forward during royal events, allowing herself to be towed along if they’re holding hands or standing slightly behind him or even gazing up at him.’ 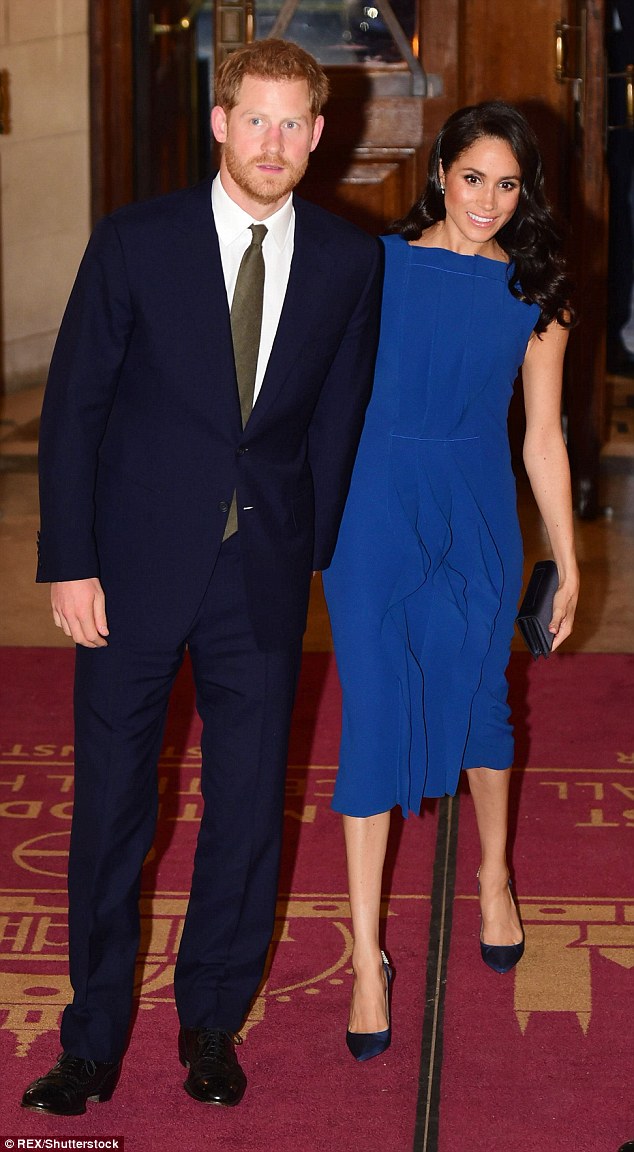 As they attended the 100 Days to Peace Gala in London last week, Meghan demonstrated how she allows herself to be ‘towed’ by Harry when they’re holding hands to give him the chance to take the lead 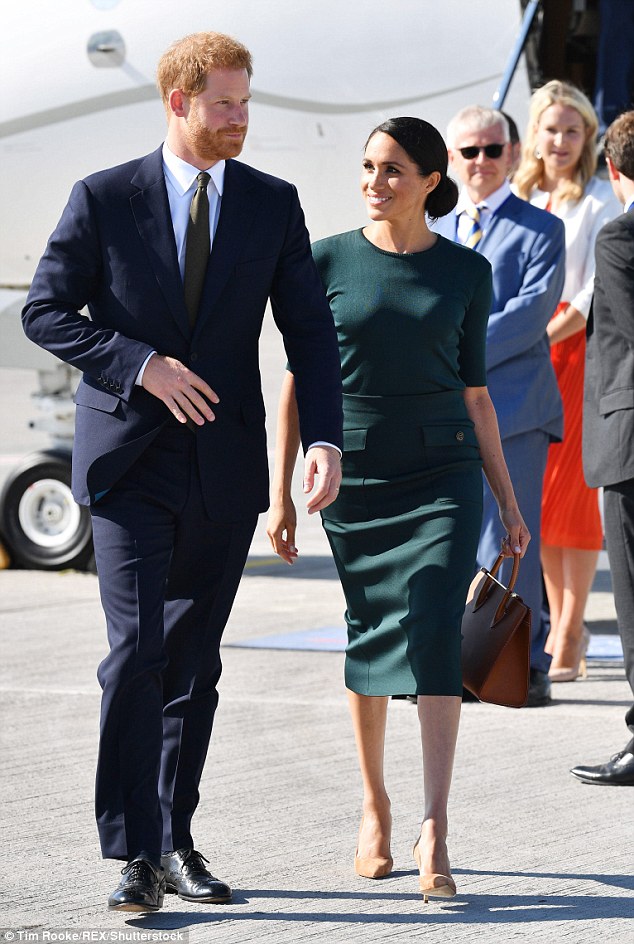 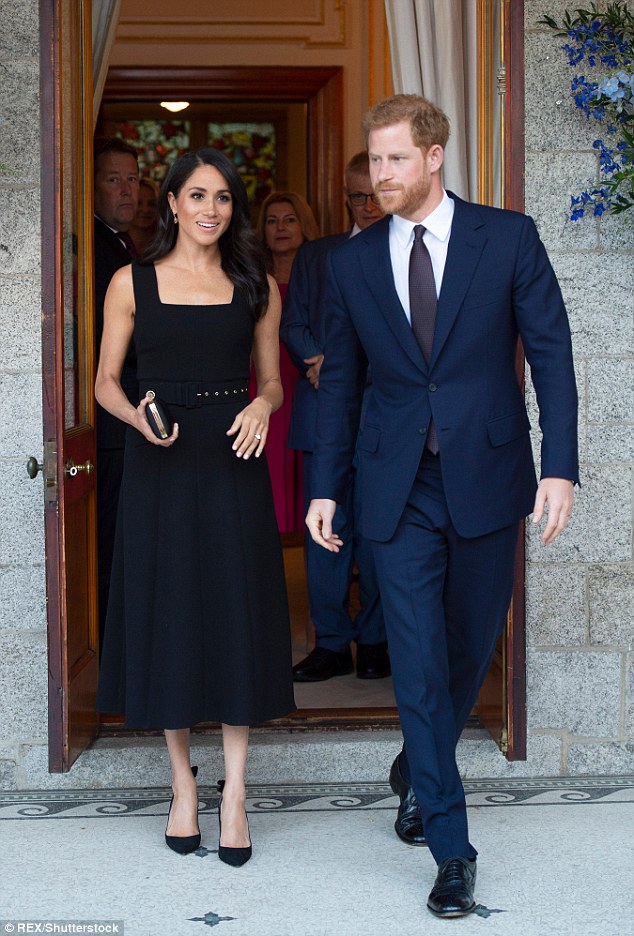 Meghan, pictured arriving at a garden party at the British Ambassador’s residence in Dublin, has developed a habit of allowing her husband to walk slightly ahead so that he assumes the dominant role

While Meghan is eager not to outshine her husband, she’s still a strong woman who doesn’t want to fade into the background.

According to Judi, she does this with subtle gestures such as rubbing or patting Harry on the back.

‘She’s registering her more subliminal dominance via a series of small back touches or pats that look quasi-maternal and which are reassuring, steering or controlling gestures,’ she explained.

‘Harry’s “James Bond” style departure from his wedding showed he likes to see himself in the role of romantic hero. 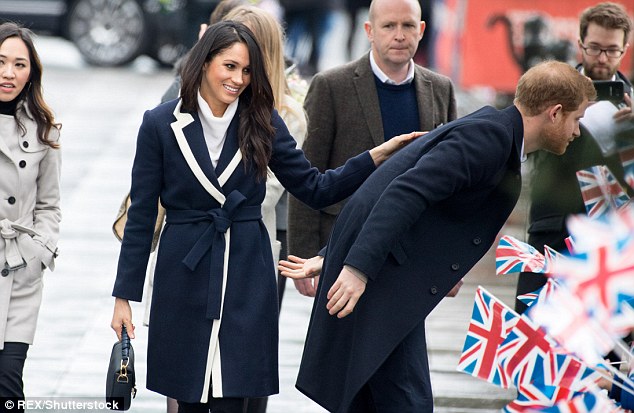 Meghan, pictured with Prince Harry on a visit to Birmingham in March, uses gestures such as gentle pats on the back to reassure the royal and also allowing herself some dominance in a maternal role

‘But he is also still the small boy who lost his mother at an early age and so the quasi-maternal approach from Meghan seems to compliment those needs as much as the flattering and flirty behaviours from her that boost his confidence by appealing to his alpha side.’

Judi believes Meghan has learned the delicate balance of mothering while ego boosting from her time as an actress.

‘Her technique of stepping back and pushing Harry forward might be intrinsic to her skills and experience,’ she explained.

‘Hierarchy is clearly and emphatically defined in the acting profession.

Actors who get work will know their place in terms of not upstaging the bigger names on the bill, although they will also work to gradually raise their own profile to get to the top themselves too.

Man shares second he found a rest room led to ‘secret London rave’
Couple broadcast intercourse life on-line to indicate what actual intercourse seems like
Controversial lingerie firm has their advert BANNED after outrage over uncovered nipple
Dragons' Den concepts are shared by Mumsnet customers
Sam Bladwell offers delivery to her child daughter prematurely after she was identified with lung mo...
Best books on mountains: Author Patricia Nicol suggests novels featuring significant summits
Women share their biggest dating disasters - and they'll make you feel better about your own
Mold and bacteria could be in YOUR skincare products