Good screen roles have been thin on the ground lately for Gerard Depardieu, but the enfant terrible of French cinema was back in front of cameras at the weekend.

Admittedly, it was something of a supporting role — just a face in a crowd. But given the crowd in question was a gaggle of invited VIPs at celebrations in Pyongyang to mark ’s 70th anniversary, the 69-year-old actor has once again managed to excel himself as the film world’s most mind-bogglingly outrageous star.

His gargantuan bulk swathed in a billowing white shirt, and his potato head topped with a wide-brimmed straw hat, he certainly stood out among the hordes of suited North Koreans, dutifully honouring a military parade by one of the world’s most repressive regimes.

Brutalised citizens have to turn out to applaud the goose-stepping soldiers and clapped-out military hardware because they’ll end up starving to death in a forced labour camp if they don’t. The star of Cyrano de Bergerac, Jean de Florette and Green Card had no such excuse, which might explain why he appeared a little flustered to be spotted by journalists. 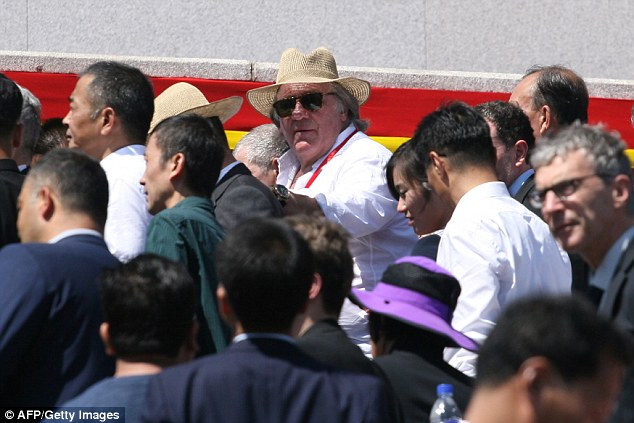 It remained unclear whether Depardieu was there to take part in the festivities — including a vast military parade, rallies and ‘mass games’ — or was just a guest. But he wasn’t about to elaborate when reporters tried to question him at a tourist hotel.

Visibly annoyed, Depardieu refused to speak to them and was filmed saying: ‘I don’t want journalists.’

According to a witness, he even refused to pose for photos, and one of his entourage warned a reporter he would have ‘a bad time’ if he persisted in trying to talk to the actor. That’s a way of dealing with unwelcome questions that will endear the hard-drinking 69-year-old star to his new circle of friends — an apparently ever-widening group of the world’s most notorious despots.

The extent of his relationship with Kim Jong-un has yet to be revealed, but the deeply paranoid ruler certainly doesn’t usually allow celebrities into the country — let alone accord them VIP status — unless he knows they will say the right things.

And Depardieu, who is supposed to be filming a movie about the conflict in Afghanistan — before moving on to playing the composer Bach — has a long and ignoble record of saying ‘the right thing’ about despots.

It is a controversial world view to say the least — and the actor’s reputation took a further blow recently when it emerged Paris prosecutors are investigating alleged ‘rapes and sexual assaults’ of a young actress at his mansion in the city last month. His accuser, an unidentified 22-year-old ‘actress and dancer’ says he sexually assaulted her twice.

Perhaps his jaunt to North Korea was an attempt to put the investigation behind him. But then no leader seems beyond the pale for Depardieu.

He has long expressed enthusiasm for the monstrous Vladimir Putin, and the Russian leader reciprocated by giving the Frenchman a Russian passport in 2013, reportedly when the parsimonious actor wanted to avoid huge French tax hikes, an allegation he denies.

Putin gave him citizenship (and Russian tax status) over dinner and a bearhug. The star boasts that Putin is a ‘friend’ he sees ‘regularly’. He has said the president ‘gives me lessons in geopolitics’ — and it shows. Depardieu loves to rage against the pernicious influence of the U.S., and recently even suggested the Pentagon created the AIDS virus.

He applauds Putin’s policies, including Russia’s illegal annexation of the Crimea, and claims to have visited Russian prisons and been impressed by their ‘wonderful’ food.

In his memoir, the actor — who reportedly keeps a mansion east of Moscow — insisted the Russian hardman and former KGB chief ‘liked my hooligan side’.

The star, whom Pope John Paul II once unwisely compared to St Augustine, is also pally with Ramzan Kadyrov, now the president of Chechnya. Kadyrov, a ruthless former rebel warlord with a passion for guns and fast cars, struck up a friendship with Depardieu in 2011 when the actor attended his birthday celebrations. 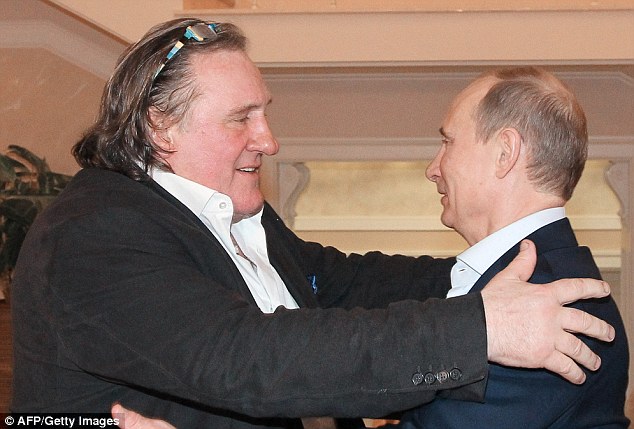 An ally of Moscow, Kadyrov controls forces that have been accused of kidnapping and torturing Islamic insurgents and their families. He denies the charges. Human rights activists were dismayed when Depardieu and co-star Liz Hurley arrived in Chechnya amid great fanfare to film a thriller in 2013. At a press conference, Depardieu ridiculed Western claims that the country was violent.

Depardieu has also revealed that he even befriended the late Cuban dictator Fidel Castro, obligingly investing in an oil field on the island and bonding with the communist leader over a mutual love of food.

‘I met him in 1992 when I made him pâté,’ he told Graham Norton. ‘He loves to eat also, and is very curious about food. He is a friend and I go hunting with him and with [current president and Fidel’s younger brother] Raúl.

Depardieu insisted the pair, who presided over a totalitarian state accused of myriad human rights abuses, ‘know everything about everything and they are normal people’.

It seems unlikely such an enthusiastic connoisseur of tyrants will lose much sleep over being spotted celebrating the rule of the murderous Kim Jong-un.

It has become fairly clear that Depardieu — often described charitably in France as ‘une force de nature’ — doesn’t care what people think of him, and may even delight in testing the patience of his forgiving fans.

He revels in his enormous size —he weighs more than 20 stone and has had multiple bypass operations — and looks that have gone to seed after a lifetime of drinking, smoking and gorging.

‘I’m happy with very little on this earth … but I do like to have a lot in my glass,’ he said once. He has boasted he can get through 14 bottles of alcohol a day, once becoming so inebriated he drank an entire bottle of hair lotion after mistaking it for Italian liqueur.

On another occasion, turned up drunk at a solemn First World War commemoration and shouted obscenities.

Although he insists ‘I’m never totally drunk, just a little p***ed’, one would like to think he didn’t realise what he was doing when in 2011 he urinated in the cabin of a Paris to Dublin flight after being told he would have to wait to use the on-board lavatories.

The following year, he was accused of assault after his scooter collided with a car in Paris. The driver of the car claimed a heated argument led to Depardieu punching him in the face. In 2013, he was fined after falling off his scooter while driving drunk.

In 2014, he brought out a jaw-droppingly candid autobiography which revealed a man with little moral compass. He confessed to having been a child prostitute, a thieving thug and even a grave robber.

The son of an illiterate, alcoholic metal worker and a mother who considered aborting him with knitting needles, Depardieu had a childhood so poor the family ate hedgehogs. He turned quickly to crime, selling his body to passing lorry drivers even as a schoolboy and helping a man to dig up newly buried bodies to loot their jewellery and shoes.

Moving to Paris, the self-described ‘rough-hewn peasant’ continued to steal and prostitute himself. He was saved from homelessness by a gay theatrical talent spotter who paid for him to study drama. The workaholic actor and inveterate womaniser went on to combine a prolific and acclaimed acting career with an apparent off-screen death wish: he has made more than 170 films and survived 18 motorcycle accidents. 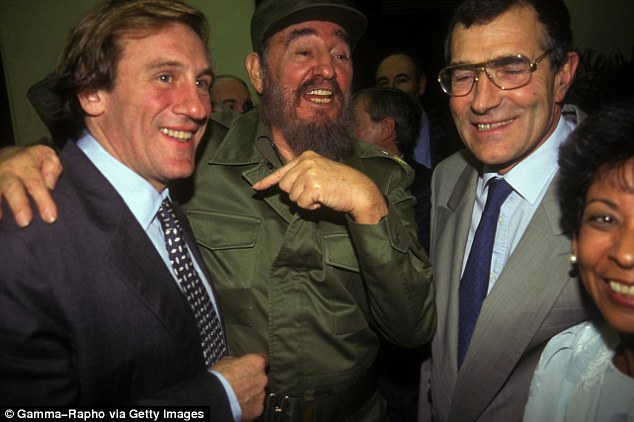 The French director Bertrand Blier, who propelled Depardieu to overnight domestic stardom playing a violent criminal in the 1974 film Les Valseuses, said he was also a thug off-screen. ‘Twenty years ago, he was extremely dangerous,’ Mr Blier once said.

‘We literally had to follow him at night to stop him getting into punch-ups. He would deliberately go into the most dangerous areas, looking for trouble. Even now when he arrives at the door, I think, “Where are the valuables?” ’

Depardieu, who admits he has been an immature father, has had four children by various partners, but one child, Guillaume (by Depardieu’s marriage to his Jean de Florette co-star Elisabeth Guignot) died at the age of 37.

Guillaume also became a rent boy and was jailed twice for heroin and theft offences. The actor says his children are ashamed to bear his name and — in the case of his actress daughter, Julie — ashamed to even look like him.

Five years ago, she admitted she’d had plastic surgery five times because she couldn’t stand looking like her ‘hoodlum’ father. The French have tended in the past to rather admire his devil-may-care attitude, which is leavened by immense charm. But even if they can tolerate his cosying up to several of the most reviled dictators on the planet, he may have crossed a line after being accused of rape.

Sources say Depardieu is friends with his accuser’s father, and had ‘taken her under his wing’, giving her tips on how to start her acting career.

Depardieu’s lawyer says the actor ‘absolutely denies any attack’ and is ‘distraught … this accusation goes against everything he respects’.

His Kremlin pal supportively ensured Russian state TV rushed to the actor’s defence, suggesting he was the victim of a blackmail attempt. It was the least Putin could do after Depardieu dutifully turned out to vote in the Russian presidential election in March, providing Moscow’s embassy in Paris with a handy photo-opportunity as he arrived to drop his ballot in the box.

But even the friendship of Putin and, who knows, perhaps cuddly Kim Jong-un may not be enough to save the charismatic but deeply flawed star from a shaming sex trial.

Harrowing passenger video captures second Aeromexico airplane crashed. 4 crew members had been prais...
Tina Turner opens up about son's suicide for the first time
The doting grandfather: Heartwarming picture shows Charles playing with young Prince Louis
Routine food inspections halted by US government shutdown
Kelly Ripa has a princess moment in extravagant Christian Siriano ballgown
Duchess of Sussex's letter to Vogue readers says she has 'no fear of depths'
Footage from outside Jeffrey Epstein's Manhattan jail cell 'too flawed' to be used by investigators
Meghan Markle re-wears £530 coat she sported on the Suits set to meet her pilates pal at the airport