After rising to fame on The Only Way Is Essex before carving out a career as an online fitness guru, Jessica Wright knows a thing or two about looking her best.

But the former reality star’s sartorial prowess left a lot to be desired on Monday evening, when she took to the red carpet at the TV Choice in a wedding gown-inspired dress that placed her atop the list of the night’s worst-dressed celebrities.

The 32-year-old brunette beauty turned heads for all the wrong reasons as she made her grand entrance at ‘s storied Dorchester hotel in the white fishtail gown, with a French lace pattern reminiscent of doilies. 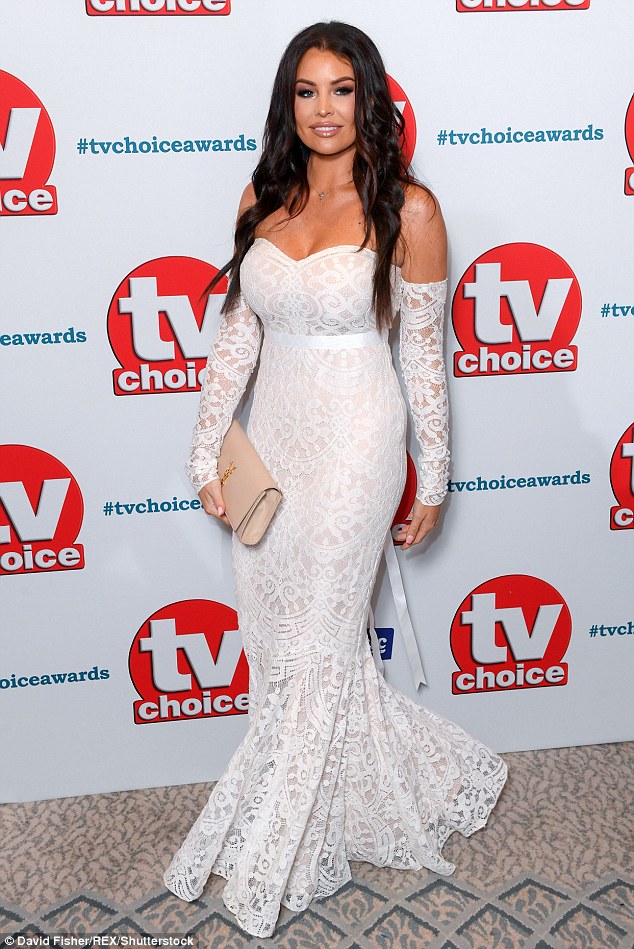 With a deeply plunging sweetheart neckline helping her display her bounteous bosom, the sister of TV personality Mark Wright scored another huge miss in the off-shoulder gown with the addition of attached long sleeves.

Teaming her gown with a beige Yves Saint Laurent clutch bag, she added piles of extensions to her dark brown tresses, while a generous application of glossy makeup highlighted her heavily bronzed features.

And Megan Barton-Hanson may be revelling in having struck gold with her long list of endorsement deals since leaving the Love Island villa last summer, but her metallic dress at the awards ceremony dazzled in all the wrong ways. 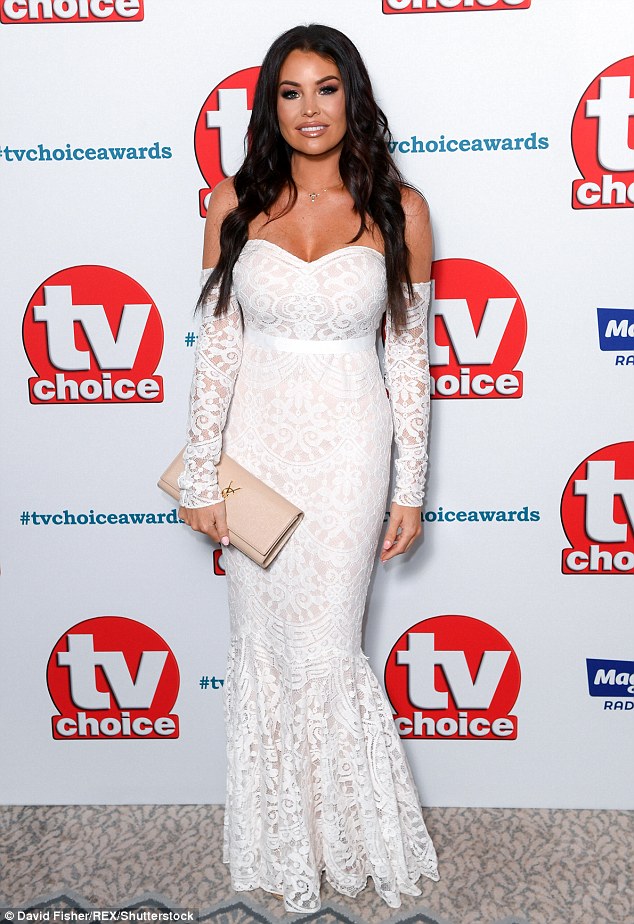 Miss: The 32-year-old brunette beauty turned heads for all the wrong reasons as she made her grand entrance in the white fishtail gown, with a French lace pattern reminiscent of doilies

Sleeves: With a plunging sweetheart neckline helping her display her bounteous bosom, she scored another huge miss in the off-shoulder gown with the addition of attached long sleeves 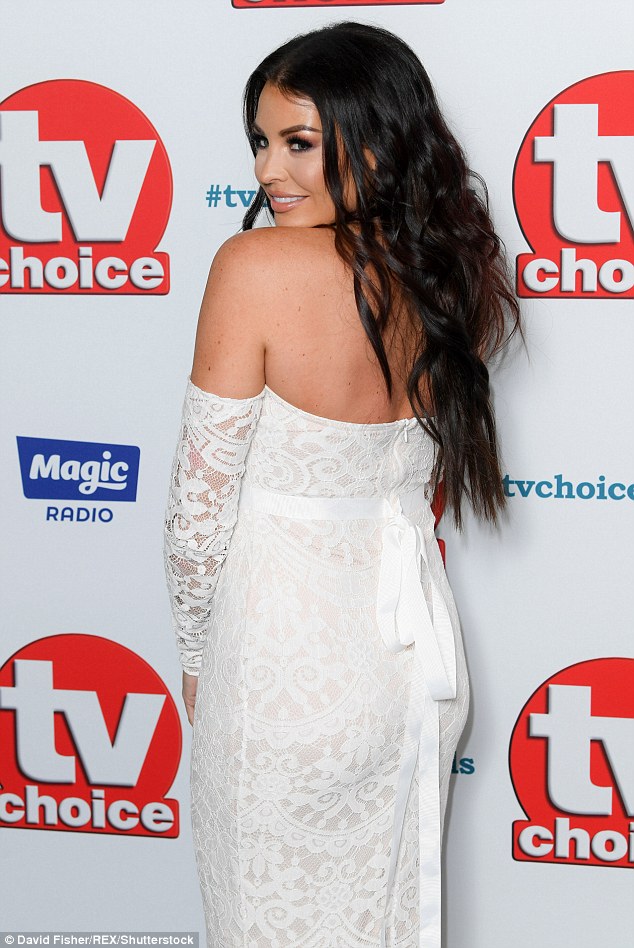 Dis-tress: She added piles of extensions to her dark brown tresses, while a generous application of glossy makeup highlighted her heavily bronzed features

Her glittering sleeveless number, which featured zig-zagging golden detailing, did little to flatter her breathtaking physique as she sauntered down the star-studded red carpet with her beau Wes Nelson.

The sheer detailing over her ample cleavage and decidedly daring central thigh-high slit was perhaps just a little too much on the flesh-flashing side for the upscale event.

Also opting to accentuate her bust in sheer style was fellow Love Island alum Olivia Attwood, whose ensemble of choice looked far too casual for such a soiree.

Her semi-sheer corset-style top, which left far too little to the imagination, was teamed with high-waisted black flared trousers and overly chunky wedge heels. 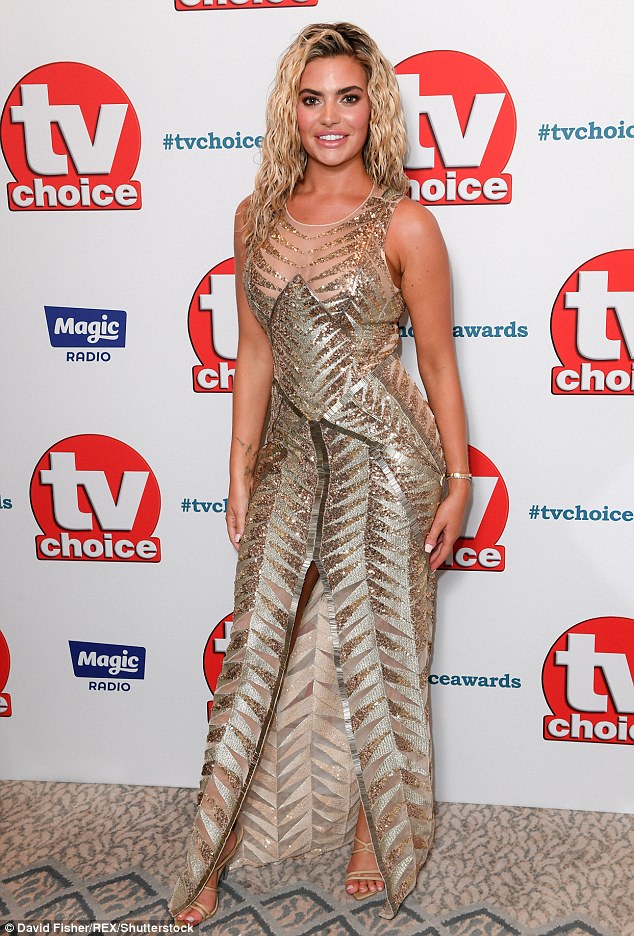 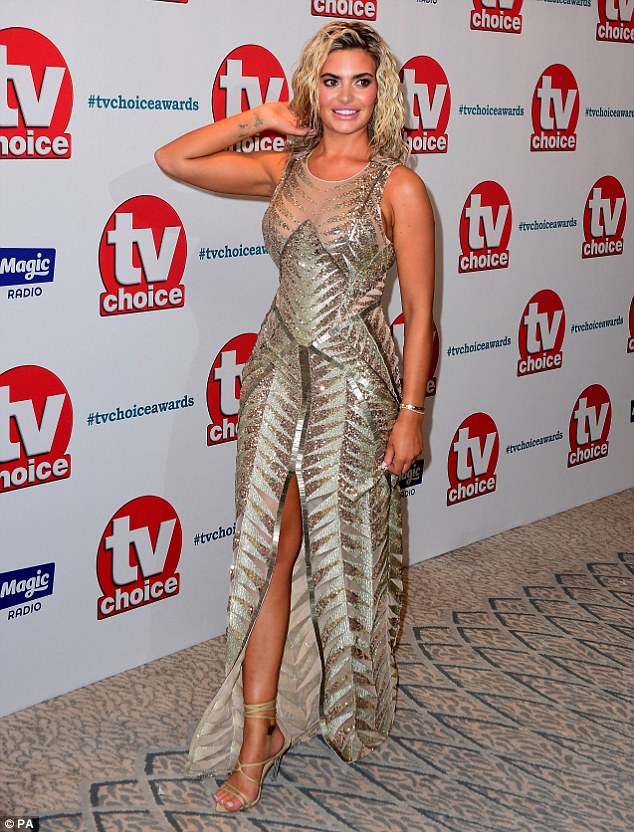 Apparently taking another cue from Megan, she wore her golden locks in a curly wet look finish, which detracted from the good looks that won her legions of fans.

Former TOWIE star Joey Essex appeared to show that his ‘reem’ days were well and truly over, when he arrived at the event in a shockingly casual ensemble.

The erstwhile reality star hit the red carpet in a trendy black Christian Dior bomber jacket, which he teamed with a plain white top, black skinny jeans and a pair of black trainers with luminous yellow detailing and chequered laces.

In an effort to seemingly emphasise the fact that he was keeping things casual, he struck a series of poses that likely would have landed him a role as an extra on Ali G.

With the awards show in its 22nd year, Pointless’ Richard Osman once again take to the stage to present the glittering ceremony for the second year in a row.

Discussing the awards, the British presenter said: ‘I’m so excited to be hosting the TV Choice Awards once again, it’s going to be another incredible evening.

‘Last year was such great fun, telling jokes, meeting some amazing celebrities, and unsuccessfully flirting with all the hosts of Loose Women.’ 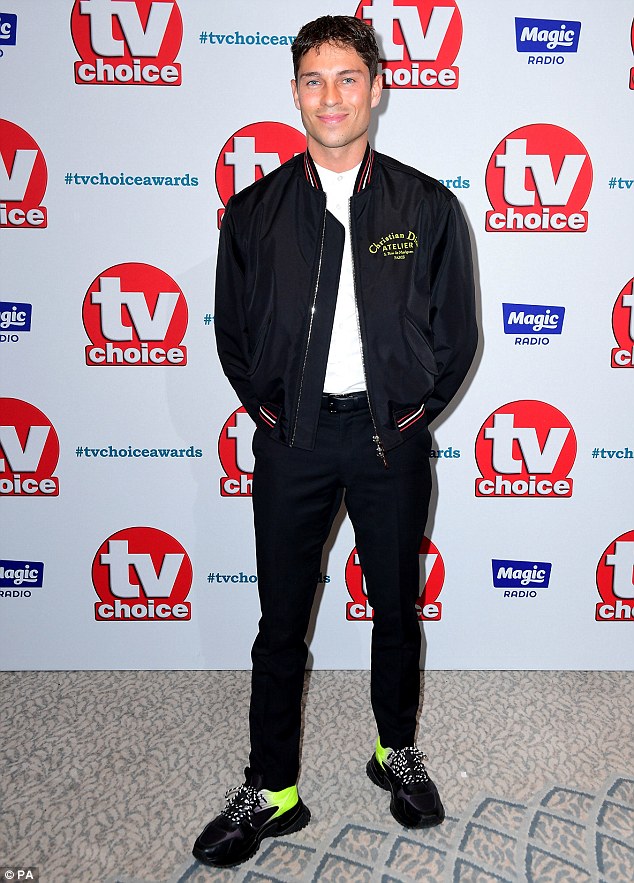 Peaky Blinders is up for the Best Drama Series, while Cillian Murphy is in the running for Best Actor and Helen McCrory has been tipped for Best Actress.

In the Best Drama Series, former winners Poldark and Doctor Foster will be healthy competition for the show as well as the Amazon Prime Video smash hit Outlander.

Troubled Ant McPartlin stepped down from his TV duties earlier this year following his arrest for drink-driving charges. 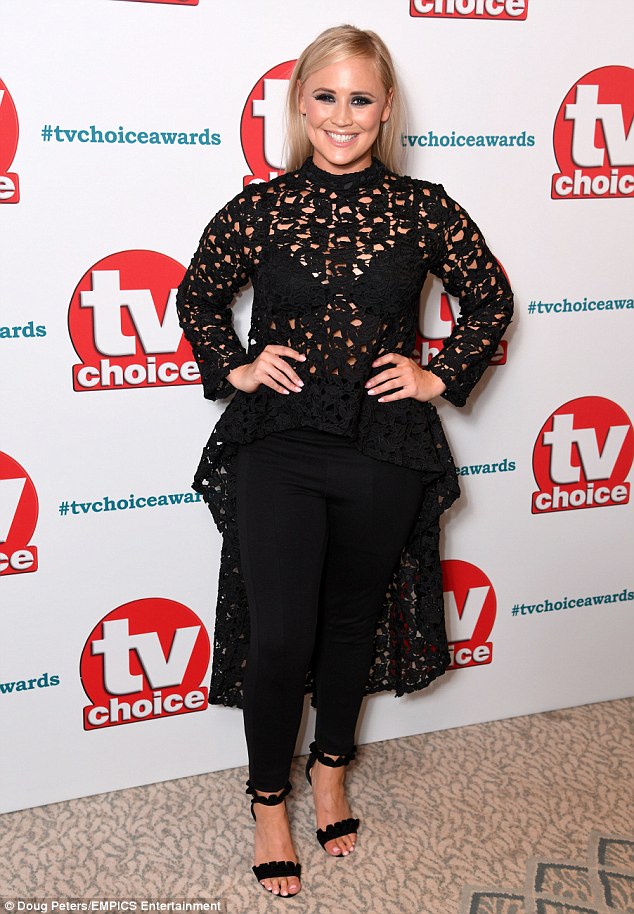 ITV2’s Celebrity Juice, Channel 4’s Gogglebox and BBC1’s The Graham Norton Show will all be competing for the same prize.

Of course Love Island is leading the way in the Best Reality Show category, with the show receiving more applicants for the villa than Oxford and Cambridge.

The reality show pulled in 2.9million viewers with record-breaking figures for the launch night that doubled more than last year’s audience.

Love Island will have to fight off First Dates/First Dates Hotel, I’m A Celebrity… Get Me Out Of Here and The Island With Bear Grylls for the trophy.