Queen Maxima of the Netherlands looked fresh in florals as she stepped out for an engagement in The Hague today.

The 47-year-old royal donned a printed blouse and navy culottes as she opened a financial workshop in the city.

Maxima, wife of King Willem-Alexander, was joined by Dutch Minister Sigrid Kaag at the event launching the Global Partnership for Financial Inclusion workshop. 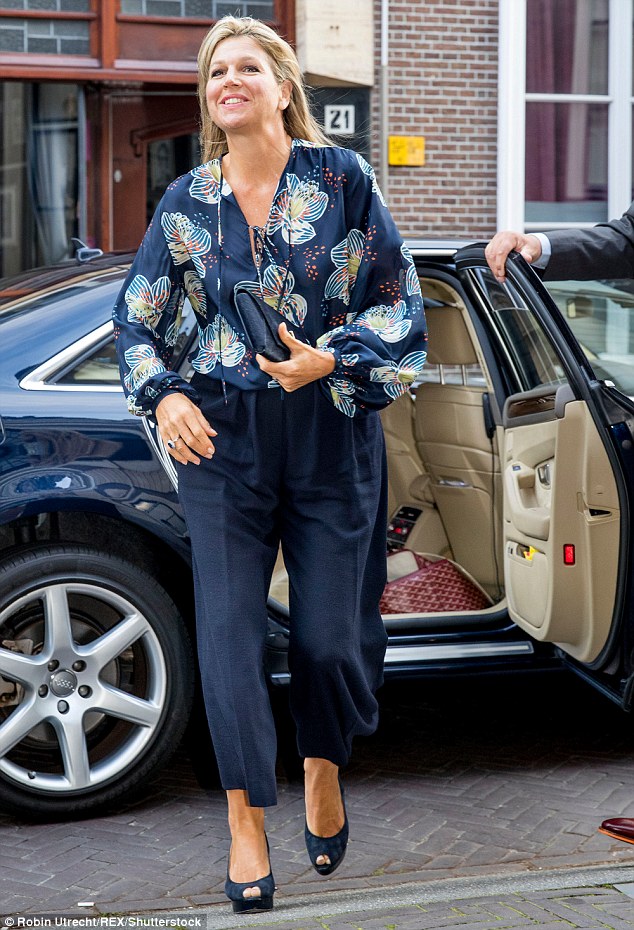 Carefully co-ordinated: Queen Maxima of the Netherlands, 47, wore head-to-toe navy as she attended the the opening of a workshop of the Global Partnership for Financial Inclusion of the G20 in The Hague on Monday. She added a pop of colour to the look with a floral blouse

Same print as this skirt!

Between the likes of The Duchess of Cambridge, the new Duchess of Sussex, Queen Letizia of Spain and Queen Maxima of Netherlands, we’re definitely not short of stylish royals!

Queen Maxima stepped out today living up to her chic reputation in a pair of navy cropped trousers, which she teamed with peep-toe platforms in a matching shade, as well as a fab floral blouse.

The top is by one of Maxima’s go-to brands, Natan, featuring a print of pretty oversized blooms. This pattern first appeared in the spring/summer ’15 collection, but we love this staple blouse design.

Sadly it’s not available to buy online, however click right to check out more from this label with the royal seal of approval.

Or why not get the look with the options below from Y.A.S, Boohoo, Vila and Gap. 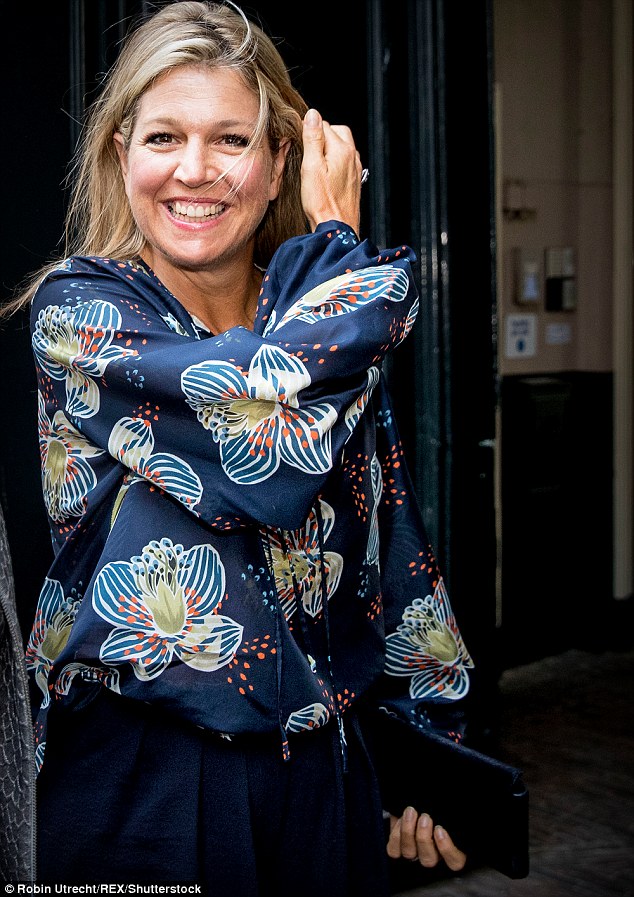 Flower power! Maxima beamed as she arrived for the financial workshop on Monday

The workshop focuses on the importance of good access to financial services for people who are forced to leave their homes.

The Dutch queen appeared in excellent spirits as she arrived at the workshop, beaming as she stepped out of her car.

A gust of wind swept her blonde hair out of place but Maxima saw the funny side and quickly regained composure. 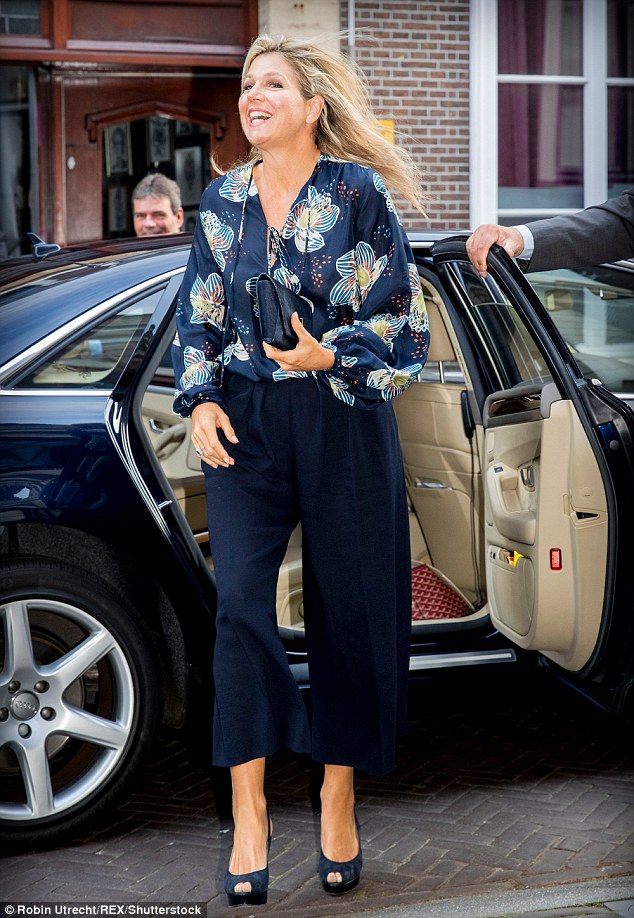 Windswept: The 47-year-old royal saw the funny side when a gust of wind blew her hair out of place as she stepped out of her car, pictured, and quickly regained composure 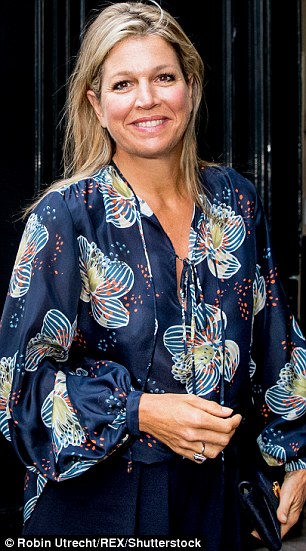 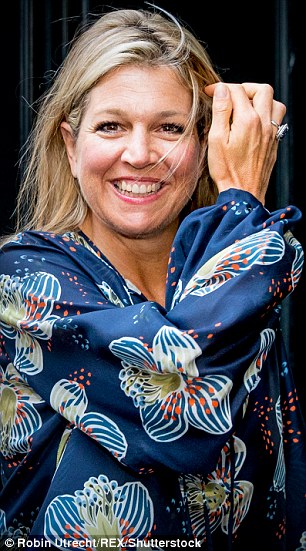 Ready for business: The Dutch queen wore her hair in a simple side parting for the outing 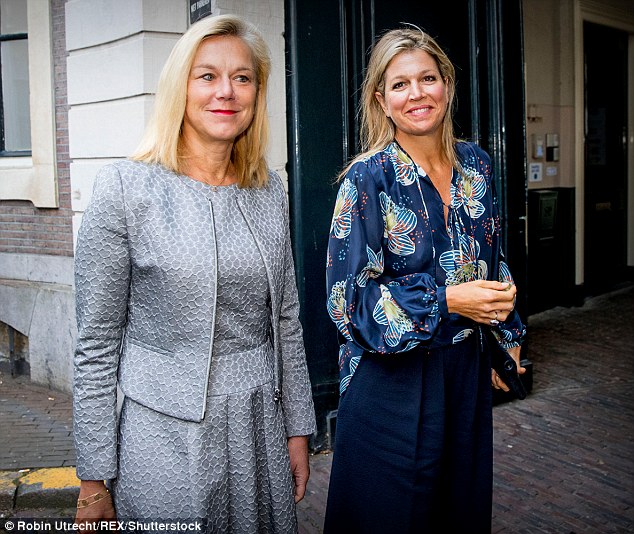 Power players: Maxima was joined by Sigrid Kaag, Minister for Foreign Trade and Development Cooperation, at the event in The Hague on Monday

The mother-of-three looked ready for business in the navy tunic style top with billowy sleeves, which was covered in a bold orange and blue floral print.

She teamed the statement piece with a simple pair of wide-leg navy culottes.

Known for her love of colour co-ordinated ensembles, Maxima finished the look with a pair of navy suede shoes and a navy leather clutch.

The appearance marks one of the royal’s first since she taking a few weeks off her duties over summer. 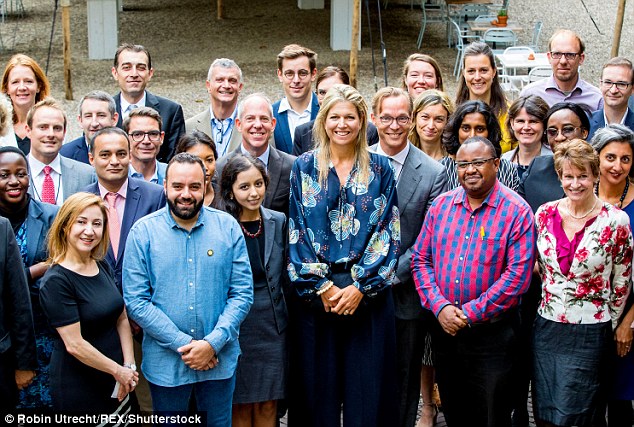 Stronger together: Maxima poses with participants of the workshop, which focuses on the importance of good access to financial services for displaced people around the world 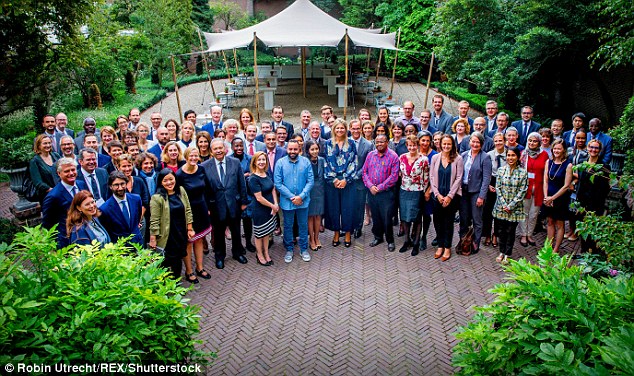 Team photo: Maxima stands front and centre with other workshop participants in The Hague

Maxima has endured a difficult few months, recently flying to Buenos Aires for the funeral of her younger sister, Inés Zorreguieta.

Inés took her own life at the age of 33 following a lengthy battle with depression.

Máxima pulled out of several state visits in the wake of Inés death in June, bravely returning to work two weeks later.

Later that month, during a visit to a hospital in Groningen, she appeared to fight back tears as she gave a short speech.

Salt Lake Metropolis Mormons raise the lid on their 'monogamish' relationship
Meet the straight-talking Australian divorcee with an Instagram Vogue is OBSESSED with
Specialists counsel you might save virtually 25 per cent on vacation tickets by shopping for them no...
Great British Bake Off fans are smitten with Ruby Bhogal
French influencer ties the knot in a VERY stylish wedding
Queen Letizia of Spain and King Felipe come face-to-face with a bull
Dancers perform a routine at their wedding in California
Virginia woman celebrates the birth of her 'miracle' IVF triplets