A titanium implant the size and shape of a bullet could offer relief to thousands of long-term back-pain sufferers.

The experimental procedure, being offered in clinical trials at four teaching hospitals, involves the device being screwed into the patient’s lower spine where it gives support and alleviates pressure on the nerves.

As the operation involves only a small keyhole incision in the side of the body, patients are able to go home the same day and need minimal recovery time.

It is a welcome alternative to invasive spinal surgery, which can leave patients unable to walk for months. 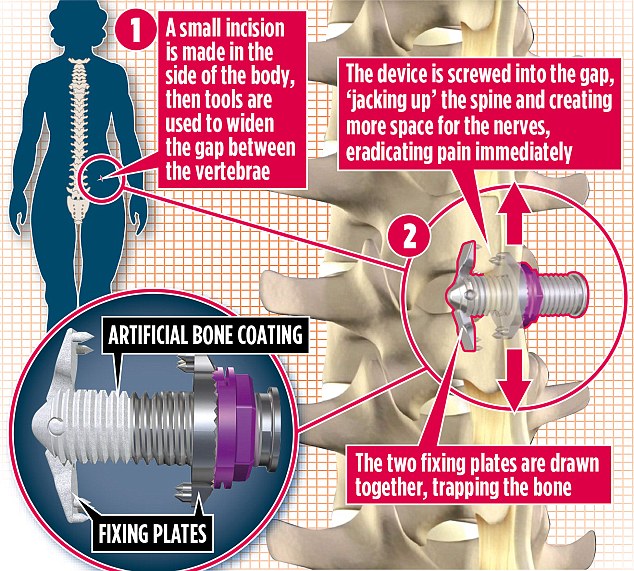 A titanium implant the size and shape of a bullet could offer relief to thousands of long-term back-pain sufferers. As the operation involves only a small keyhole incision in the side of the body, patients are able to go home the same day and need minimal recovery time

The device is designed to treat a condition called spinal stenosis – a narrowing of the spinal canal as a result of collapsed vertebrae which leads to compression of the nerves and extreme pain in the lower back and legs, known as sciatica.

While 95 per cent of over-50s experience some stenosis, about ten per cent of the population will suffer severe problems.

Conventional treatment includes physiotherapy and painkillers, along with lumbar surgical decompression, which involves bone and tissues that press on the nerves being removed. This involves a two-day hospital stay.

But symptoms often return after a few years if the bones disintegrate further.

The revolutionary bullet – called the Minuteman – is coated in a special type of man-made calcium, which promotes the body’s natural healing process. The bone either side of the device eventually fuses together, closing gaps in the spine and providing long-term stability.

HEALTH HACKS: Sleep in a cold room to get slimmer

It’s not quite time to turn on the heating, but as temperatures drop, think twice before you reach for the thermostat at night.

Studies have shown that sleeping in a room at about 18C boosts percentages of brown fat – a type that acts more like muscle, and helps burn calories – according to a 2014 study at the National Institutes of Health in the US.

The research involved five men who slept in climate-controlled rooms wearing light pyjamas and bedsheets, for four months. After four weeks, they had nearly doubled their brown fat, increased their insulin sensitivity and also experienced an increase in their resting calorie burn.

‘It would be naive to do this and expect to lose weight to the extent you would on a diet,’ said the researchers. ‘But we did see a measurable increase in glucose metabolism that could add up over time.’

The Minuteman is being offered as part of a trial at NHS hospitals in Birmingham, Ipswich, Taunton and Leeds and has so far been performed on 20 British patients and 950 worldwide.

After a local anaesthetic is given in the back, a 2cm incision is made in the side of the body. A series of tools are used to widen the gap between the vertebrae.

The Minuteman is then inserted into the gap and screwed in place, ‘jacking up’ the spine, creating more space for spinal nerves and immediately alleviating pain.

Lower back pain is the leading cause of disability worldwide, with one in ten men and almost one in five women affected. The condition accounts for seven per cent of all GP appointments, and results in the loss of 4.1 million working days a year. A third of those who suffer sciatica still have symptoms a year after diagnosis.

Other causes of back pain include a slipped – or prolapsed – disc in the spine pressing on a nerve, and ankylosing spondylitis, an arthritis-type condition that causes swelling of the joints in the spine. Another is spondylolisthesis, when a bone in the spine slips out of position.

Solicitor Lynda Greenwood, 64, from North Yorkshire, earlier this year became one of the first patients to have the Minuteman device implanted, following years of lower-back and leg pain.

‘I had sciatica, pain down the legs, and I had several painkilling injections, but ultimately the treatments were reducing the pain but not tackling the cause of the problem, which was spinal stenosis,’ she says. ‘I was referred to Mr Jake Timothy at the Leeds General Infirmary, who was carrying out a clinical trial of the Minuteman.

‘He decided I was suitable candidate to take part.

‘At the time the pain was very bad. I remember walking my dog the day before the operation and thinking this is so awful, I will soon be in a wheelchair. It had become very debilitating.

‘On the day of the operation I limped into the hospital at Leeds ready for the treatment.

‘I had a general anaesthetic and when I woke up, I knew it had worked. I had no pain, and I have had none since. I was ecstatic.

‘I can feel the device in my back, but I have no pain at all. I was up and about straight away.

‘If I had undergone conventional surgery there would have been a three-month recovery period. I couldn’t be happier.’

ASK A STUPID QUESTION: Why do bruises turn such incredible colours?

‘Initially, bruises appear red as there is oxygen in the blood, but over time the blood becomes deoxygenated and turns a blue or purple colour.

‘The shade of colour and amount of colour visible depends on the thickness of the skin and the composition of components that exist in that particular collection of blood vessels.’

Milwaukee girl, 58, dies from uncommon blood an infection after being nipped by her new pet -
Fox News host Jesse Watters reads scolding texts from his mom
Foodies mercilessly troll PETA for promoting banana skin as an alternative to pulled pork
Philadelphia cops are PELTED and TAUNTED by crowd who cheered for gunman with 'extensive rapsheet'
How Captain Tom Moore became a global superstar
Trump insists he DIDN'T fire top U.S. attorney in Manhattan
Twitter hackers who used accounts to scam unsuspecting users walked away with more than $116K
Harry and Meghan's US election intervention 'violated' terms of deal with Queen, say senior aides