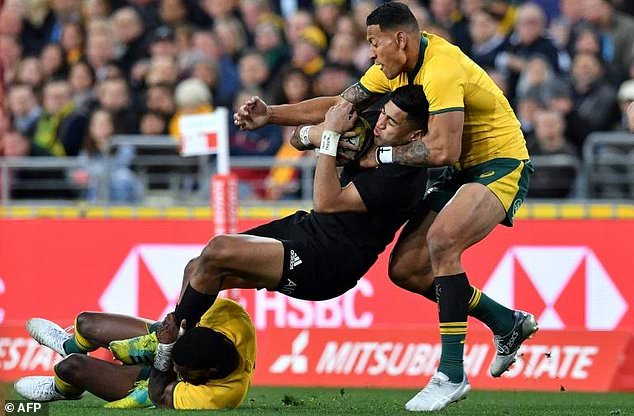 Australia’s star fullback, Israel Folau, was pulled from the lineup for Saturday’s Test against South Africa due to a nagging ankle injury, the Wallabies announced.

Folau injured his ankle in the opening Bledisloe Cup match against New Zealand on August 18 and had only returned to training this past week.

He had been included in the starting side announced earlier in the week, but the Wallabies announced Saturday morning that he had been ruled out of the Test against the Springboks “after failing to overcome an ankle injury”.

“Dane Haylett-Petty will slot in at fullback with Jack Maddocks promoted to the right wing and Tom Banks earning his start off the bench,” the team said in a statement.

Coach Michael Cheika had already shaken up the lineup for this weekend’s Test after the Wallabies lost six of their past seven games, including ceding the Bledisloe Cup to New Zealand for the 16th consecutive year following a 40-12 hammering in Auckland and a 38-13 thrashing in Sydney.

Cheika notably pulled Bernard Foley, a 60-test veteran, from the starting 15, moving Kurtley Beale to the number 10 spot in his place.

Meghan Markle 'is planning to reunite with estranged father Thomas in secret inside weeks'
Northern California blazes now largest in state historical past
Candice Swanepoel reveals the 'crazy veins' covering her chest after breastfeeding
Police release double glazing worker over Gatwick drone
Time for Brexit Plan C? May on the verge of ditching talks with Labour
Niece of Syrian ruler al-Assad loses £25,000 in UK bank account because it breached sanctions law
Marks & Spencer mocked for its 'British birds' jigsaw as a QUARTER of species are NOT British
Labour makes MORE gains in latest poll but Tories still on course for majority