Late designer Kate Spade may have parted ways with her eponymous fashion label more than a decade before she died, but that didn’t stop the brand from paying tribute to its founder as it hosted its first New York Fashion Week show since her tragic suicide in June.

The brand honored Spade, who died in June at the age of 55 after hanging herself with a scarf, by leaving ‘In Loving Memory’ cards on the seats of each guest at its spring/summer 2019 show, which took place on Friday at the New York Public Library.

Each card bore the years of Spade’s birth (1962) and death (2018) on one side, while the other featured the quote: ‘She left a little sparkle everywhere she went.’ 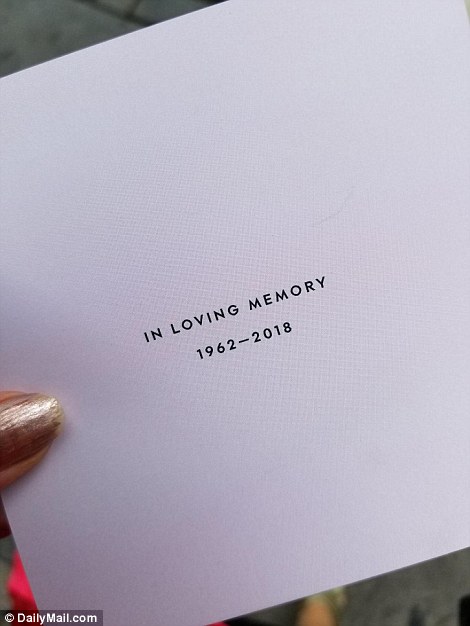 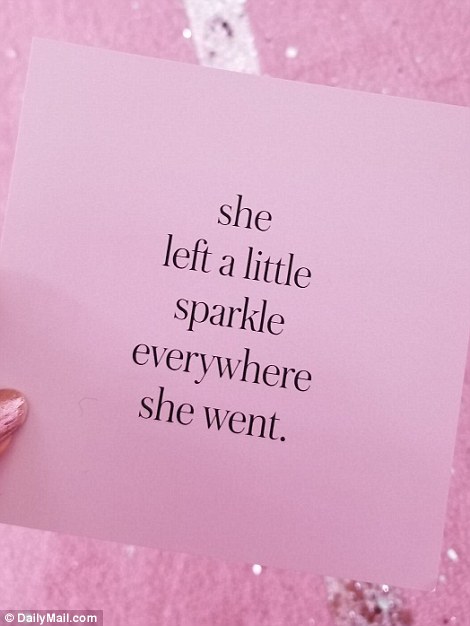 Tribute: The brand paid tribute to the late designer, placing ‘In Loving Memory’ cards on each guest’s seat, all of which featured a touching quote about Spade, as well as the years of her birth and death

Creative director Nicola Glass also highlighted the significance of the brand’s roots, explaining that Kate Spade’s new collection was inspired by the ‘original codes of the house’, which have been ‘refined and evolved in unique ways’, describing the design process as a ‘journey that starts at the beginning to form new paths’. 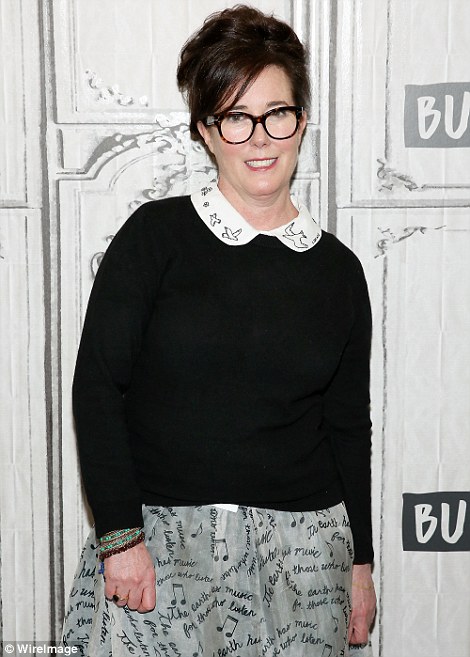 Tragedy: Spade passed away at the age of 55 after a battle with depression

‘This collection has been given a lot of care, attention and love,’ she signed off her message to the brand’s guests.

This season, the brand chose to move away from its traditional presentation-style format, choosing instead to share its new collection with fashion fans on the runway.

Several stars turned out for the event, including actresses Priyanka Chopra, Kate Bosworth, and Elizabeth Olsen, as well as model Suki Waterhouse, all of whom had a perfect view of the show from their perch on the front row.

Bright, colorful spring designs were showcased on the catwalk, with with pared-down florals and funky geometric patterns dominating the collection, which was punctuated with fun accessories, including laser-cut beach bags, large sunglasses, and colorful headcsarves.

Bold yellow dresses stood out among a palette of muted pastels, with materials ranging from flowing silks to more rigid cotton.

In another nod to Spade’s lasting heritage, the show also featured updated versions of the designer’s ‘Sam’ bag – one of the first designs she released when the label first launched.

Spade officially parted ways with her eponymous brand in 2007, when she and her husband Andy sold off their remaining shares in the company – 44 per cent – in order to focus on raising their daughter.

Glam: The brand’s spring/summer 19 collection was inspired by the ‘original codes of the house’, according to creative director Nicola Glass’s show notes

But the designer remained forever connected with the label that she founded, which continued to use her name even after she moved on to new ventures.

When Spade was found dead at her Manhattan apartment on June 5, the brand released a heart-breaking statement in honor of its ‘visionary founder’.

‘Our thoughts are with her family at this incredibly heartbreaking time,’ the statement – which was shared on Twitter – continued.

‘We honor all the beauty she brought into this world.’

The brand’s latest show comes just one day after Frances Valentine, the handbag brand that Spade co-founded in 2016, released its own tribute to the designer – the ‘Kate’ tote, which is inspired by the first bag Spade released when he founded her namesake label in 1993.

Spade’s business partner Elyce Arons appeared on Good Morning America on Thursday to share her grief over her friend’s tragic death, revealing that she remains devastated by the loss – but determined to continue on with the brand that Spade left behind.

Iconic: Several models carried updated version’s of the ‘Sam’ bag (right)  – which was one of the first designs Spade released when she founded her label in 1993

She added that, although she knew about Spade’s ongoing battle with depression, she could not have ever predicted that the designer would even consider taking her own life.

‘It was tough because she didn’t always say it,’ she said of Spade’s mental health battle. ‘She’d be sad and then one minute later, she’d make a joke.

‘We talked every day and most of the time she was very happy but I don’t know if anyone can understand the depths of depression of another person.

Vowing to carry on with Frances Valentine, the label they launched in 2016, Arons said she had been given a push in encouragement by the outpouring of love Spade’s family received after her death.

‘We miss her every day. Her spirit’s here. We’ve had a lot of people, a lot of people, write in and talk about how she changed their lives and [saying] “please keep going and keep her designs alive.”

PAOK vs Chelsea LIVE score and updates - Europa League 2018-19
Brazilian woman SLAMS Sydney cafe after being served an 'x-rated' acai bowl
German city braces for protests as Erdogan opens mega mosque
At least eight dead and dozens feared trapped after primary school collapses in Nigeria
Spot the join! Metal sections are so precisely engineered that they seamlessly interlock
Cruise passenger 'goes overboard' in the Atlantic on voyage from Ireland to Florida
Children as young as FOUR working in mines, farms and factories at the turn of the 20th century
Scientists at war with ministers over Covid: Experts call for public inquiry into 'failures'