She has earned herself a place as the nation’s sweetheart thanks to her girl-next-door looks and affordable wardrobe choices.

But in recent months fans have noticed a dramatic shift in ‘s wardrobe choices from high street to high end on the set of This Morning.

The presenter, 37, has swapped bargains from the likes of Miss Selfridge and Dorothy Perkins for pricey designer pieces by labels like Reiss, J Crew and Whistles with the help of her stylist Angie Smith.

Just this week, the mother-of-three wore a £280 dress from trendy Parisian label Sandro in the ITV studios, one of her most expensive ensembles yet costing more than seven times as much as some of her earlier outfits.

Holly appears to be stepping up a gear in the style stakes as her already stellar career received another boost with the news she’s to join Declan Donnelly in the jungle as his co-host on I’m a Celebrity… Get Me Out of Here. 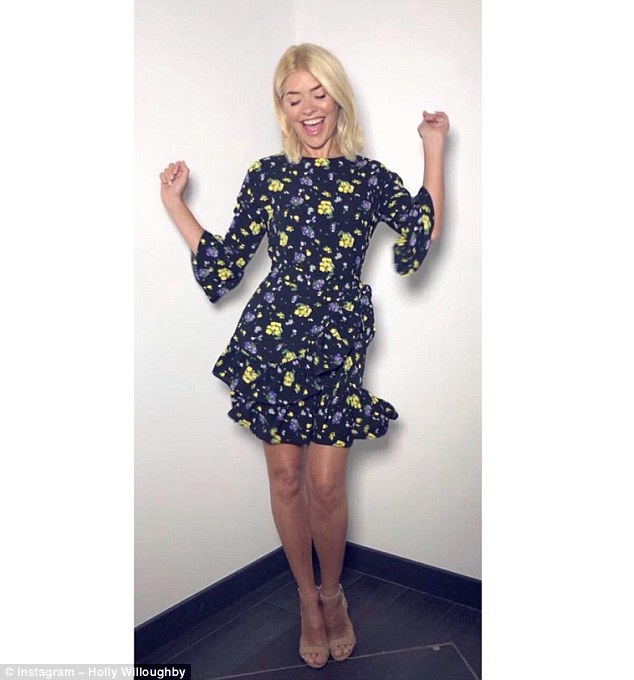 APRIL: Earlier this year, Holly sported this envy-inducing look – a floral dress from Very costing a purse-friendly £38. Recent outfits have cost more than seven times as much

Holly will stand in for Dec’s sidekick Ant McPartlin, who is taking a year out to focus on his recovery from drink and drug addiction.

Experts predict the lucrative project, launching in the autumn, is tipped to double Holly’s fortune, which already stands at £10 million.

‘Holly has always thrown in the odd mid to higher end piece but now it seems her daily wardrobe is a high street free zone. 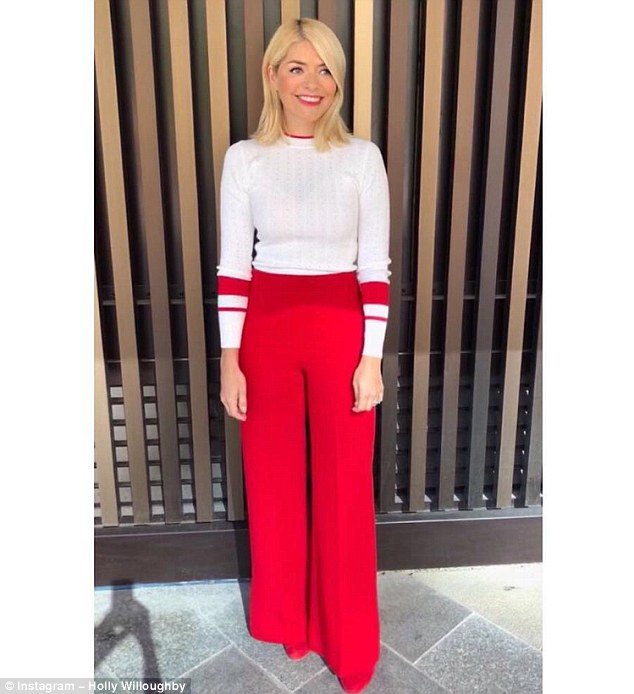 MAY: Holly had another high street hit on her hands, teaming a £39.99 pair of Zara trousers with a £35.99. The entire ensemble, excluding the shoes, comes to just £76 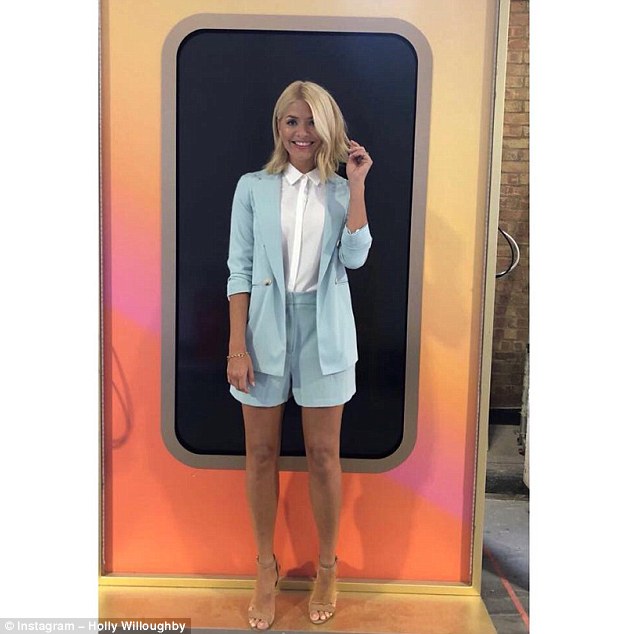 JUNE: Holly won style plaudits with this summery look, teaming a £79 Jigsaw shirt with a £39 blazer and matching shorts from Miss Selfridge which were on sale for just £17 – with the whole outfit coming to £135, significantly more expensive to some of her outfits earlier in the year 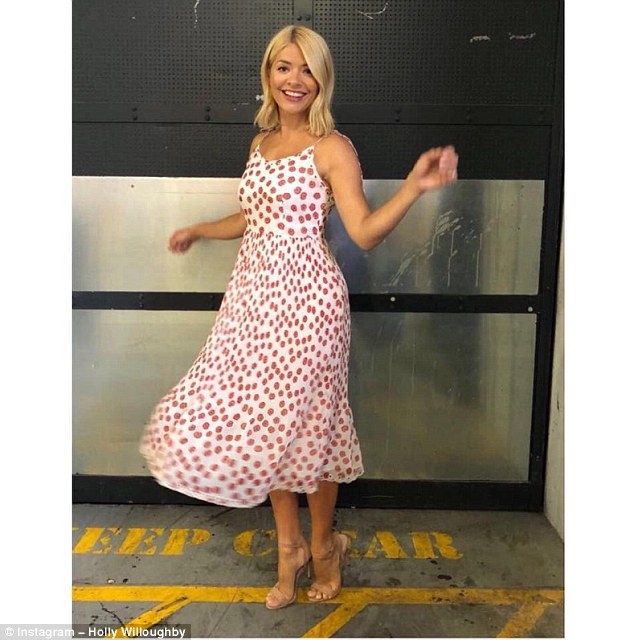 JULY: In a marked departure from her purse-friendly high street steals, Holly wore this £189 Whistles dress for an appearance on This Morning in July 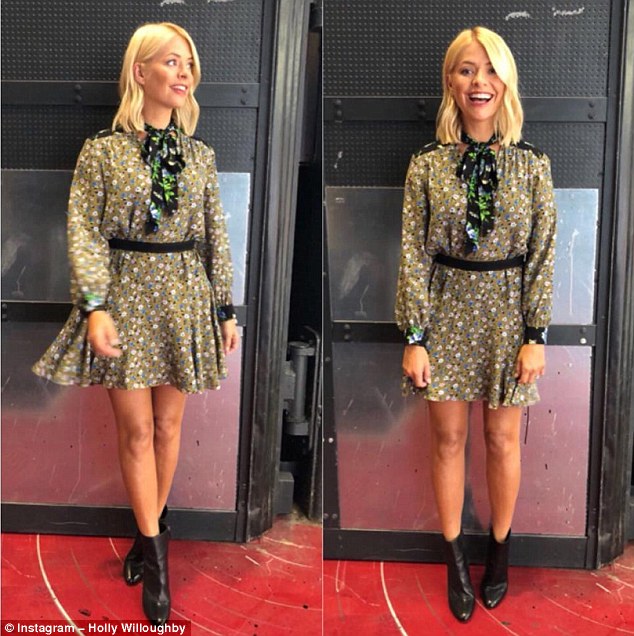 SEPTEMBER: Back at work after the summer break, Holly wore one of her most expensive ensembles yet, a green mini dress from high-end Parisian label Sandro costing £280

Make like Holly in a floral dress by Sandro

Shop it here at Selfridges

If anything officially marks the end of summer and the beginning of the new season, it’s Holly Willoughby’s return to This Morning!

Although we’re sad to kiss goodbye to sunny days, we’re very glad to have our daily fashion icon back! Styled as usual by Angie Smith, Holly came back with a bang thanks to her chic green dress by Sandro.

Featuring an elegant pussy-bow neck tie and ditsy floral print, we love this staple mini. The khaki colour is also perfect for the changing seasons.

Want it for yourself? Make like Holly and click right to shop it now, or discover more of the same in the edit below with the picks from Entro, Matin, Red Valentino and more.

‘For me this is a bit of a shame, I loved that she demonstrated how amazing our high street was.

‘Of course we all know holly now earns equal amount to co-host Phillip Schofield, and has designers chomping at the bit to dress her; it’s hardly surprising she is embracing high end styling.’

Lucas added: ‘Her new found styling direction may partly be due to her lifestyle brand launch, this is high end and it could be a simple case of her wanting to proactive what you preach.’

England WAGs share vacation snaps after the World Cup
How the ability of paint can rework your private home and add as much as $60ok in worth
Consultants reveal consumers are shopping for outfits simply to pose on Instagram
YouTube star Hannah Witton reveals what ilife is like with a stoma bag
Most annoying pictures shared online- including a wrap with no filling
Viral Twitter photo that proves all parents going on holiday are the same
Student, 19, receives job offers after gaining 62,000 followers thanks to her realistic makeup looks
Rumours sparked among parents that the new Coles Little Shop range will be KITCHEN inspired items