and his wife Marina Wheeler are living apart after she accused him of cheating, it was claimed tonight.

The former Foreign Secretary has reportedly split from his lawyer wife and they are no longer seen in public as a couple.

His daughter Lara, a fashion journalist, is claimed to have said that Mr Johnson’s wife was ‘finished with him’ and would ‘never take him back now’, reported.

In 2009, father-of-four Mr Johnson fathered a daughter after an affair with arts consultant Helen Macintyre. 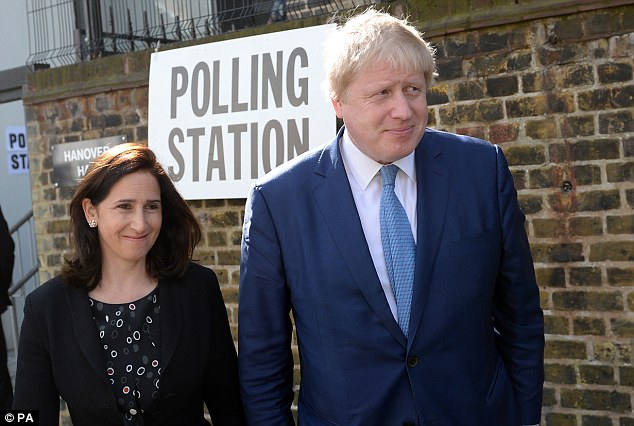 Boris Johnson and his wife Marina Wheeler (pictured together on polling day in the 2016 mayoral campaign) are living apart after she accused him of cheating, it was claimed tonight

Five years earlier he was fired as a Tory frontbencher after lying over an affair with writer and socialite Petronella Wyatt that resulted in her having an abortion. He called the allegation an ‘inverted pyramid of piffle’.

He married childhood friend  Marina Wheeler, a QC, in 1993.

In 2013 the Appeal Court ruled that the public did have a right to know about Mr Johnson’s philandering past.

It rejected claims by Helen Macintyre, with whom the married ex-Mayor of London had an affair, that the birth of their daughter Stephanie had remain secret.

Speculation over the paternity of Stephanie, who has a wild mop of flaxen hair and instantly recognisable features, surfaced the summer after her birth in November 2009.

Pensioner is killed by falling ICICLE that speared her through the head in Kazakhstan
Mesmerising footage shows rare 'ice pancakes' phenomenon covering a river in the Scottish Highlands
Public walk out of murder trial after pictures of girl, six, are shown to jury
'NYC HATES HIM!' Trump lashes out at ultra-liberal Bill de Blasio as mayor runs for president
Val Kilmer looks in good spirits as he speaks at an event in the United Nations
Remainer MPs join Jeremy Corbyn plot to pass anti-No Deal law
The fist bump killers: Moment teenagers celebrate after stabbing 18-year-old to death
MailOnline readers share the coronavirus 'essentials' they're stockpiling