Being overweight does not slow a man’s sperm, research suggests.

A new study contradicts the theory that having a high BMI reduces male fertility.

After analysing more than 200 men with healthy, overweight and obese BMIs over 10 months, the Nigerian scientists found no significant difference in their sperms’ speed, size or shape.

This comes just weeks after Bath and North East Somerset clinical commissioning group announced they will be denying IVF to women if they have a male partner with a BMI over 30, which is classified as obese.

Official guidance from the National Institute for Health and Care Excellence (NICE) also states that men with a BMI higher than 30 are less likely to father children. 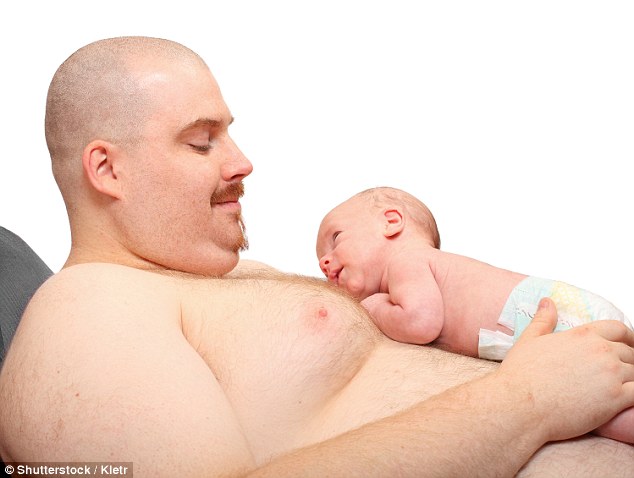 Being overweight does not slow a man’s sperm, new research suggests (stock)

The researchers, from the University of Benin, analysed 206 healthy men whose BMIs ranged from normal, at 18.5-to-25, to obese.

The men, who were aged between 20 and 40, submitted sperm samples that were assessed in a lab for their count, motility and shape, as well as any abnormalities.

They were followed over 10 months.

According to the researchers, the results, published in the International Journal of Reproductive Biomedicine, suggest that ‘elevated BMI does not significantly influence semen quality’.

Those who are unable to have children naturally or via IVF are overall 47 per cent more likely to develop the life-threatening condition, while men under 50 have three times the risk, a study found.

Undiagnosed prostate tumours may drive infertility, while low testosterone levels could lead to the development of both conditions, according to the researchers.

Early-onset prostate cancer affects around one in every 1,000 fathers under 50.

Around 35 per cent of men have poor fertility while two per cent are unable to father children.

The researchers, from Lund University, analysed all fathers and their first born children in Sweden between 1994 and 2014.

Information was taken from birth, cancer and assisted reproduction registers.

Fathers who underwent intracytoplasmic sperm injections (ICSI) were compared against those who became parents naturally or via IVF.

ICSI involves doctors injecting a single sperm into an egg. This is different to IVF, which mixes sperm with eggs and allows them to fertilise.

It generally costs up to £1,000, on top of IVF fees, and is recommended for men with very low sperm counts or who have previously struggled to have children.

Results suggest men who have ICSI are at a significantly higher risk of early-onset prostate cancer but not late.

IVF does not influence men’s risk of any type of the disease.

ICSI itself does not raise men’s likelihood of developing prostate cancer, however, infertile men may opt for the treatment in a last ditch attempt to become fathers.

‘Also, a comparison of semen defects amongst BMI groups of study population noted that there was no statistically significant difference in the semen abnormalities between men with normal and elevated BMI.’

Despite no link being found between a man’s weight and his fertility, Dr Osaikhuwuomwan stills recommends males maintain a healthy size to benefit their overall wellbeing.

He said: ‘There is no controversy that overweight and obesity have become major health concerns worldwide and the benefits of weight control cannot be over emphasised.

‘Male partners of infertile couples with elevated BMI seeking treatment can be reassured that their BMI may not adversely affect their semen quality as well as their quest for conception but overall obesity is discouraged for healthy living.’

Speaking of the findings, Hana Visnova, medical director of the fertility clinic IVF Cube, Prague, who was not involved in the study, said: ‘There’s actually very little evidence to link obesity with sperm quality in men and this warrants further study.

‘There are, though, other things to consider when it comes to libido and sex drive.

‘A high level of obesity indirectly influences sexual appetite. Obese patients may have high blood presssure and other health issues that may cause erectile dysfunction and libido impairment.’

Dr Allan Pacey, a fertility expert at the University of Sheffield, also recently argued there is ‘no consensus’ on evidence suggesting male infertility is driven by a man’s BMI.

These notions contradict a study released in July last year that suggested sperm counts in the West have declined by 60 per cent in the last 40 years, with the researchers blaming obesity, as well as stress and smoking.

Lead scientists Dr Gottumukkala Ramaraju said: ‘The health and reproductive performance of spermatozoa in obese men are more likely to be compromised both qualitatively and quantitatively.’

Pressured? Go pet some donkeys
Physician warns Kim Kardashian's favourite new sneakers put your ft at 'severe danger'
Elephants not often endure from most cancers as a result of their our bodies have a uncommon 'zombie...
Pet house owners are utilizing their animals' medication
Mom died after failing to lift cash to purchase a drug not on NHS
GP numbers down by greater than 500 as 43 medical doctors stop EVERY WEEK between March and June
Children with food allergies are being BANNED from parties
NHS red tape means woman with incurable breast cancer is denied drug