The anonymous opinion piece by a senior White House official detailing how members of ‘s cabinet is effectively trying to protect the country from its president has predictably infuriated the man himself.

But while Trump has begun a furious hunt through the corridors of the White House to find out who wrote the New York Times piece, the internet has had a more humorous response.

Hilarious memes ascribe the column to everyone from Tiffany Trump and the Easter Bunny to the First Lady and Vice President .

Others make fun of the President’s desperate efforts to unmask the writer of the anonymous article. 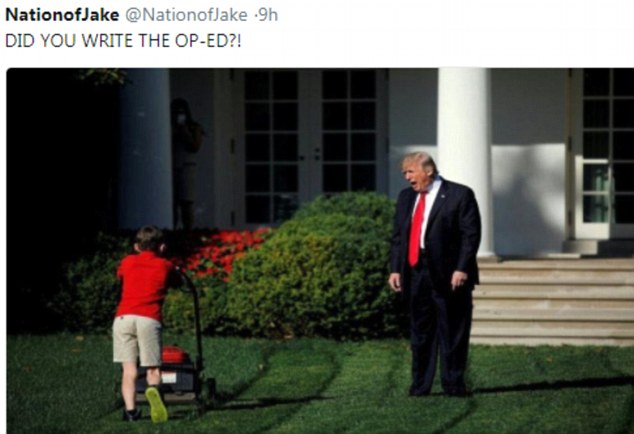 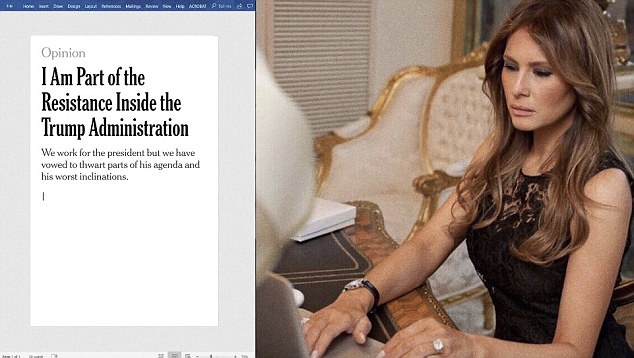 Hell hath no fury: A myriad of memes joked about who may be the person who wrote the opinion piece, including First Lady Melania Trump

The insider: Others pointed out that while the person is criticizing Trump, they are still part of the White House administration

The op-ed describes President Trump as ‘impetuous, adversarial, petty and ineffective’ in the way he manages the government.

The author claims to be  part of an organized ‘resistance’ whose goal is ‘to preserve our democratic institutions while thwarting [President] Trump’s more misguided impulses until he is out of office.’

In an online introduction, the Times says the author’s ‘identity is known to us’ and the person’s ‘job would be jeopardized by its disclosure. We believe publishing this essay anonymously is the only way to deliver an important perspective to our readers.’

The essay describes a ‘quiet resistance’ that by its nature has remained secret but isn’t designed to bring Trump down – only to curb his worst impulses. 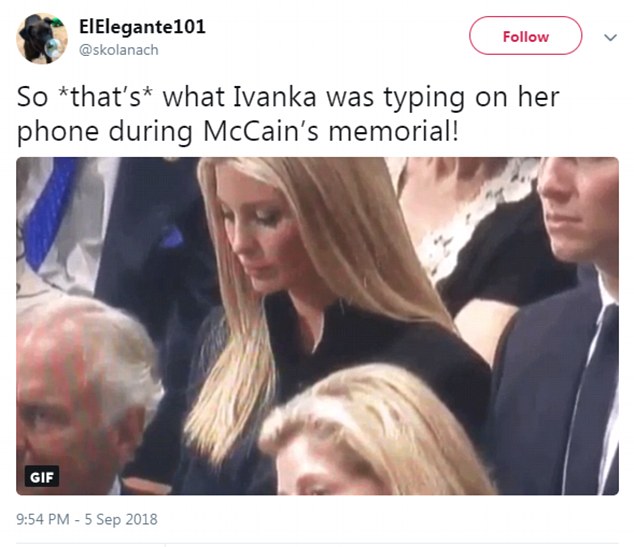 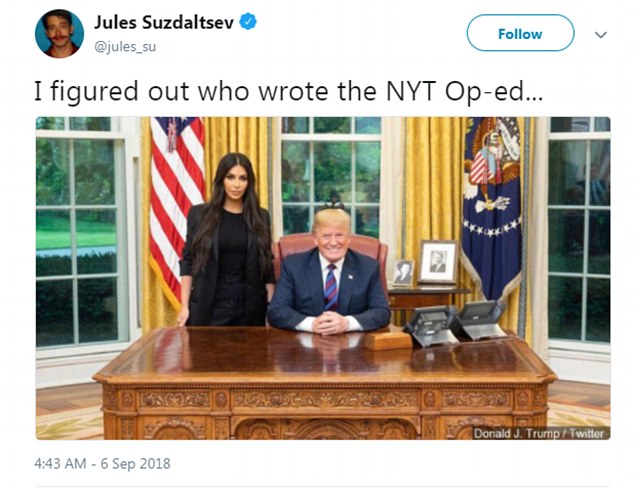 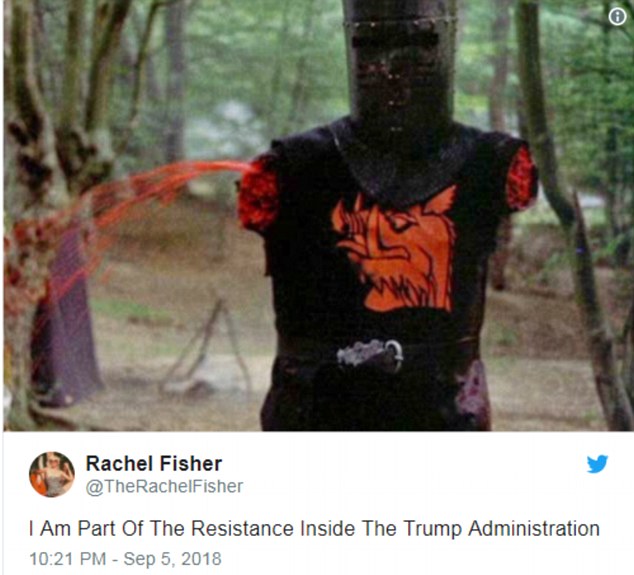 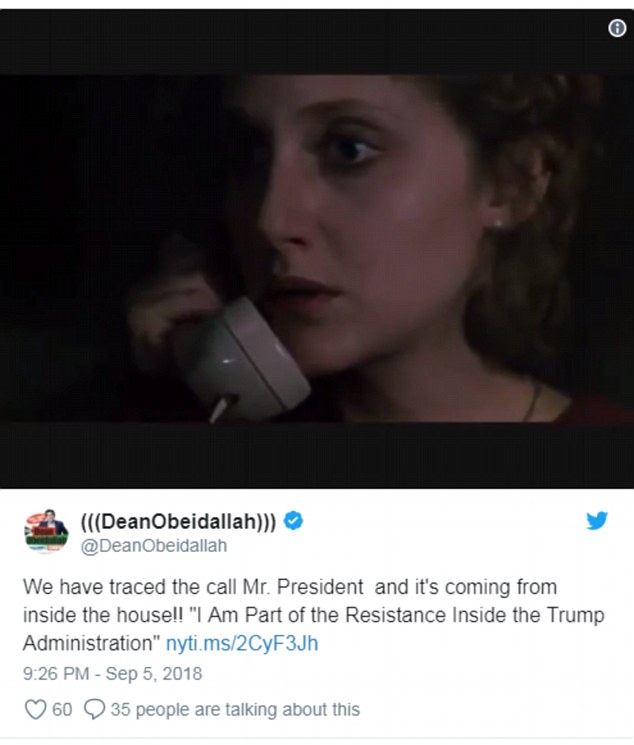 Mystery: Many of the memes made fun of the anonymous person behind the op-ed

‘Ours is not the popular ‘resistance’ of the left,’ the author writes. ‘We want the administration to succeed and think that many of its policies have already made America safer and more prosperous.’

‘But we believe our first duty is to this country, and the president continues to act in a manner that is detrimental to the health of our republic.’

So rather than risk the invocation of the Constitution’s 25th Amendment, the prescribed route for removing a president, he boasts that ‘we will do what we can to steer the administration in the right direction until – one way or another – it’s over.’ 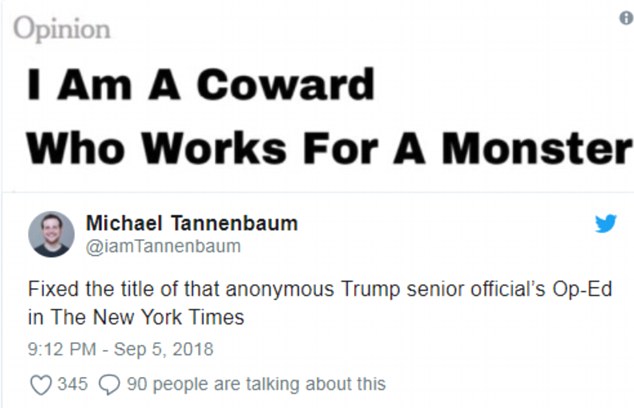 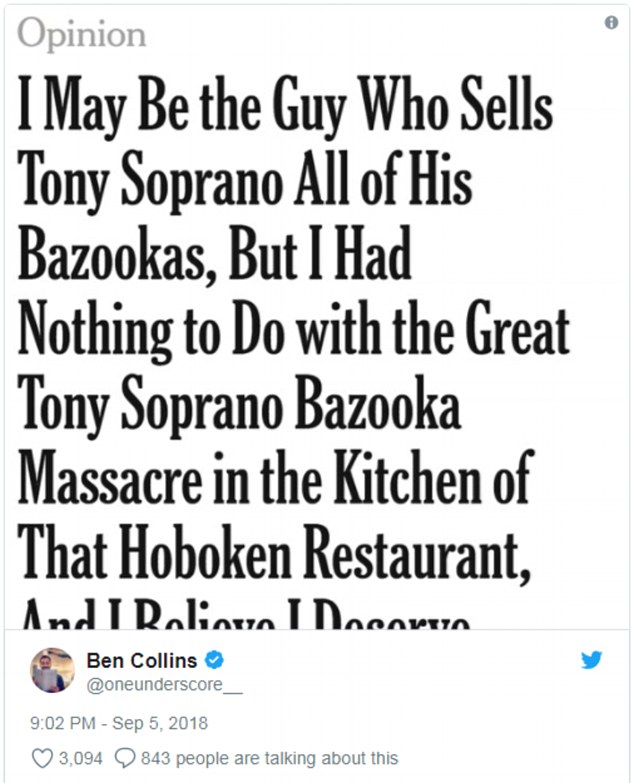 Passing blame: Some took to Twitter to accuse the anonymous writer of trying to blame the President for any faults of the government 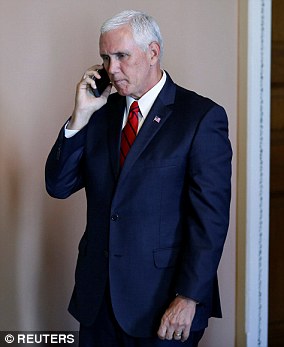 Sleuths honed in on the word ‘lodestar’, a favorite of the vice president. Recently, he described the late John McCain as ‘a lodestar for restoring honor to public life and our national dialogue’.

Others suggested the word – which means the guiding star of a ship – could have been deliberately included to throw journalists off the scent.

This was the verdict of a senior White House official who spoke to Dailymail.com. He said suspicion is not focused on him or anyone in his office following a frank discussion among the VP’s senior staff.

Furthermore, Pence has never criticized Trump in public and writing the op-ed would almost certainly scupper any future bid for high office.

If the use of lodestar was not a trick, others said, then perhaps suspicion could fall on Pence’s speechwriter. 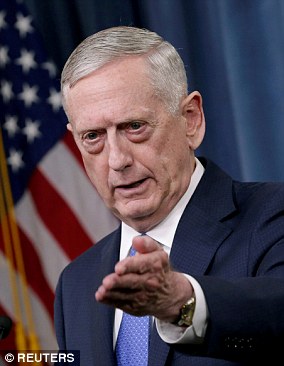 Mattis gestures during a press briefing at the Pentagon on May 19, 2017

The Secretary of Defense, despite having been a Trump favorite, has repeatedly sounded at odds with the commander-in-chief while discussing NATO, Russia and military strategy.

During one episode in Bob Woodward’s recent book, Trump questioned the utility of US early warning systems in Alaska to identify a nuclear attack from North Korea.

Mattis is said to have schooled him. ‘We’re doing this in order to prevent World War III,’ he reportedly said.

The Pentagon chief is said to have told colleagues after the incident that Trump had the mental ability of ‘a fifth- or sixth-grader.’

On Tuesday, Mattis denied the account, saying in a statement of his own: ‘The contemptuous words about the President attributed to me in Woodward’s book were never uttered by me or in my presence.’ 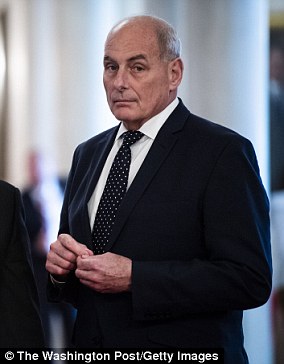 Kelly at the White House on August 20

The White House chief of staff was also quoted in Woodward’s book as having called Trump an ‘idiot’.

‘It’s pointless to try to convince him of anything. He’s gone off the rails,’ he allegedly said.

‘We’re in Crazytown. I don’t even know why any of us are here. This is the worst job I’ve ever had.’

Kelly denied making the claims in a statement put out by the White House.

‘The idea that I ever called the President is not true, in fact it’s exactly the opposite,’ he said. ‘This is both a pathetic attempt to smear people close to President Trump and distract from his many successes.’ 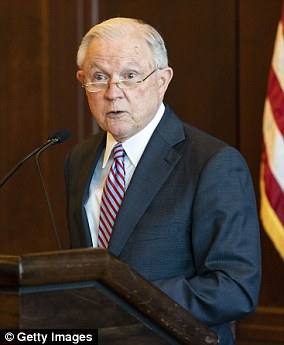 Sessions speaks about immigration and law enforcement at Lackawanna College on June 15, 2018

The Attorney General has a motive, having been repeatedly barracked by Trump for recusing himself from the Russia investigation.

Just this week he let loose on him for charges the Department of Justice brought against two sitting, Republican members in recent days, complaining that the indictments handicapped the incumbents and jeopardized the GOP’s standing in the House.

This week, the Attorney General also found out the president had called him ‘mentally retarded’, according to Woodward. Trump denied having said this. 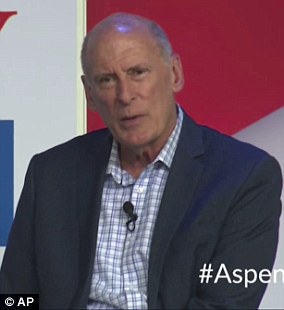 Coats addresses the Aspen Security Forum in Colorado on July 19

The director of national intelligence, was also put forward as a candidate, having previously veered from the Trump line.

Told of the president’s plan to invite Vladimir Putin to the White House, Coats said ‘That is going to be special’ – a comment that angered Trump.

He later ‘clarified’ his comments, made during an interview at the Aspen Institute security forum in Colorado, by saying his response ‘was in no way meant to be disrespectful or criticize the actions of the president’.

Trump drew heavy criticism from both Republicans and Democrats over his summit last Monday in Helsinki, Finland, with Putin, when he seemed reluctant to blame Russia for meddling in the 2016 U.S. presidential election. 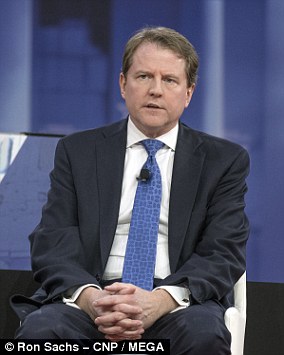 McGahn is interviewed at a conference in Gaylord, Maryland, on February 22

The White House counsel is planning to leave the White House in the fall so may not fear the consequences of being exposed as the author.

He has also clashed with Trump in the past.

This includes declining his order to fire Robert Mueller, who is overseeing an investigation into alleged Russian interference that the president describes as a ‘witch hunt’.

Indeed, McGahn has risked the president’s anger by spending 30 hours in interviews with Mueller’s team on three separate occasions in under a year.

As with all the theories about the identity of the author, this one relies on conjecture rather than any solid facts. 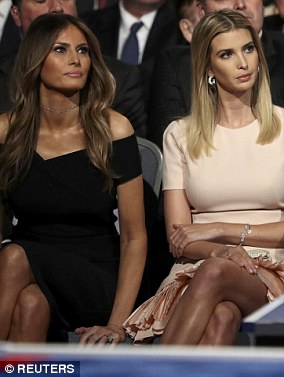 Melania and Ivanka watch on ahead of the first debate between Donald Trump and Hillary Clinton in Hempstead, New York

The first lady was another (unlikely) candidate.

Twitter commenters noted she had been accused of sending several coded messages expressing opposition to her husband’s policies.

This included wearing a jacket saying ‘I really don’t care, do u?’ when visiting hostels for migrant children.

Ivanka, meanwhile, has previously said she would work to get her voice heard through her father but has seemingly failed to do so – particularly in the case of family separations, which she was ‘vehemently’ opposed to.

Her husband, Jared, is a senior adviser and also could be involved, some have said. That said, the idea the writer came from within the Trump family seems unlikely.

Roald the Rotten! The disturbing secrets of the unstoppable lothario with a penchant for cruelty
Mayor of Tijuana said funding for Central American migrants will run out
Cows cause carnage in South Africa as rampaging herd tramples through tiny village
Britney Spears files for restraining order against former associate Sam Lutfi amid harassment claims
Tiger Woods is dismissed from wrongful death suit of 24-year-old bartender
Donald Trump backing away from background checks for gun owners
Donald Trump boasts about 'very good meeting' on gun legislation with NRA, Republicans and Democrats
Saints quarterback Drew Brees tells Trump he stands by apology over comments about anthem protest