You might overlook a mistake in a hastily written message inside a greeting card – but it’s tough for forgive one printed on the front.

An eagle-eyed shopper stumbled across a leaving card on sale despite a glaring grammatical error emblazoned on the front.

Clive Andrews came across the card, which read ‘Sorry your leaving’, in a DIY shop in Southwick, West Sussex.

It should have read ‘sorry you’re leaving’.

Clive joked that he would be buying the card for any proofreader friends that were changing jobs, as they would be the most irritated by the sloppy mistake.

Clive’s quickly went viral, and many Twitter users shared stories of the hilarious errors they’d seen on cards and signs. 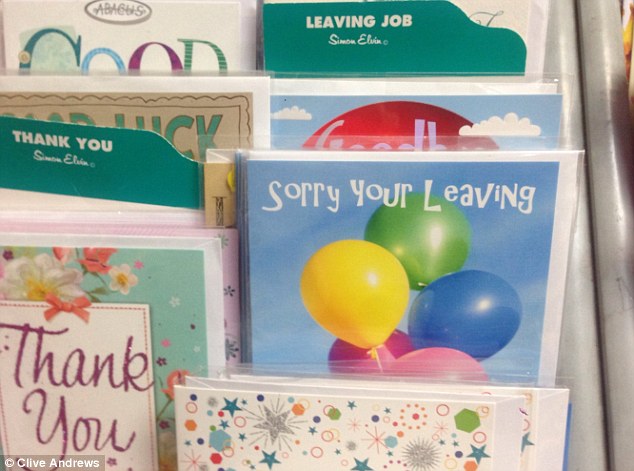 Clive Andrews came across a card that said ‘sorry your leaving’ in a DIY shop in Southwick, West Sussex (pictured). The phrase isn’t grammatically correct and should read ‘sorry you’re leaving’ instead

The word ‘sorry your leaving’ in white letters that were written in a mixture of lower and uppercase.

The grammatical error was written on a blue sky background next to a colourful bunch of balloons.

Clive tweeted a picture of the card on Monday, captioning the post: ‘I need to buy this card and hold it ready for next time a copywriter friend changes jobs.’ 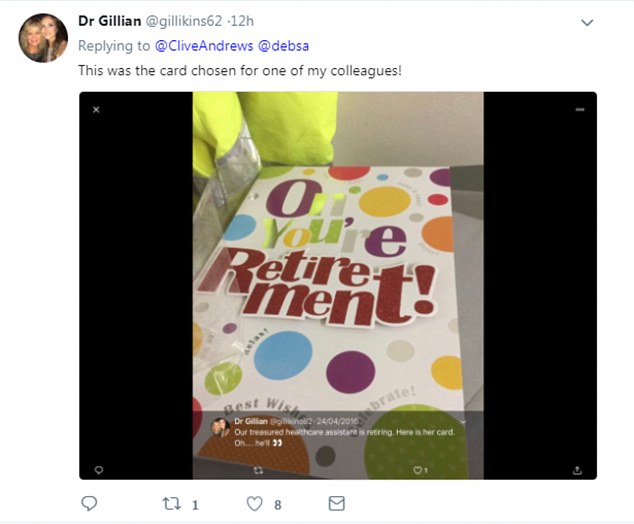 Many Twitter users shared stories of the glaring grammatical errors they’d seen themselves.

THE MOST COMMON GRAMMATICAL ERRORS CORRECTED

Even native English speakers still struggle with their grammar, including the difference between you’re and your and who’s and whose.

You’re means you are, so ‘You are going out today’.

Your is possessive, so ‘This is your house’.

Who’s means who is, so ‘Who is going our today’.

Whose is possessive, so ‘Whose house is this?’

One tweeted: ‘Reminds me of a card I once found for a ”special” friend, with a poem inside about all the ways that friend was ”special”. And yep all the ”specials” where in quotation marks. I bought it for my housemate.’

‘Gah! I spotted celery ‘storks’ in my local supermarket this morning,’ another said.

A third said: ‘A school near me had a sign out the front informing everyone about the school ”photo’s”. Again, it was a school.’

Another wrote: ‘The local care home had a sign outside for the ‘Summer Fate’. I never found out what happened to it in the end.’

Another suggested that the card wrote wasn’t didn’t actually have an error and the message actually continued inside the card.

One suggested: ‘Inside it says ”…party was shit.”’

Another commented: ‘I was going to say, ”…present has already been eaten.”’

Hawaii´s Huge Island feels the results of approaching...
Anna Friel spotted at home with military man who served alongside Princes William and Harry
Father of schoolgirl who disappeared 16 years ago claims Jeremy Kyle ‘ruined’ his life
Girl, 16, who was lured to London by older man is found
Martin Scorsese defends his anti-Marvel comments
Actress Renee Taylor reveals Marilyn Monroe's beauty secret to get glowing skin
Women spend 65 minutes longer each week at their jobs than they did a decade ago
Yes, that £6 plonk can be a corker! That's the average price we now spend on a bottle