A woman has written a touching open letter to a fellow mother she witnessed breaking down in Primark over her toddler’s tantrum, to reassure her that she’s a ‘bloody good mum’.

The woman, who goes by the name of Sirlee66, took to the British parenting forum  to share her support after she saw her sitting on the floor of the shop in tears.

Explaining to other users that the mother was with her young son who was about two-years-old, the woman reassured her that she was not alone and should not feel judged.

Saying she’s proved how good a parent she is by showing how much she cared, she added: ‘This is the toughest job in the world and we all have moments where it all gets too much and you just have to sit on the floor in Primark and have a good cry.’

And other mothers quickly flooded the letter with support, with one user writing: ‘Thank you for posting this. I hope she sees it!’, and others commenting that the mother was brave to take her toddler shopping in the first place. 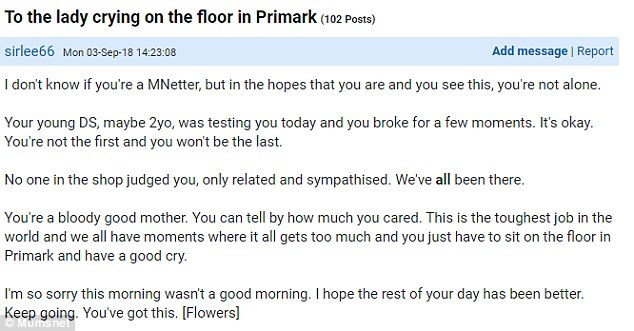 A British woman has posted an open letter to a fellow mother she witnessed having a breakdown in Primark, reassuring her that she is not alone and shouldn’t feel judged (Mumsnet post seen) 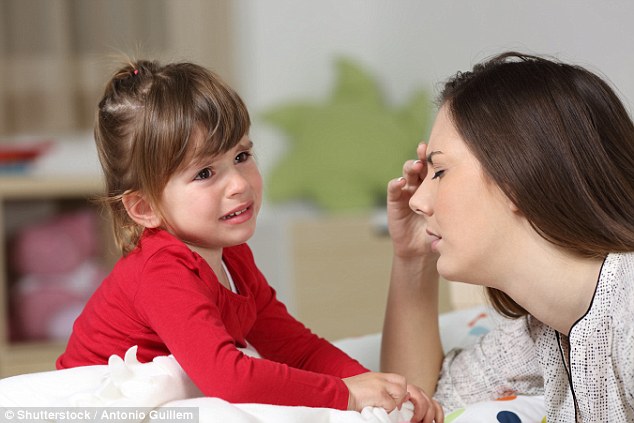 The user, known only by the name of Sirlee66, took to Mumsnet to share her support for the unknown woman, whom she says she saw crying on the shop floor of the high street store (stock image used)

Sharing her own experience, another added: ‘My two-year-old was a little menace last night. Thankfully it was in the house but I had a good wee cry (and a cup of tea.) We have definitely all been there.’

Praising the woman’s support, one wrote: ‘Good for you. Your post doesn’t just appeal to the woman you saw (although I do hope she sees it).

‘It’s positive reinforcement for all us mothers out there who sometimes crumble in public and come away from it wondering if everyone’s worrisome glances in our direction were pure scorn and judgement.

‘How nice to be reminded that there are indeed people out there who will have looked on with sympathy and understanding.’ 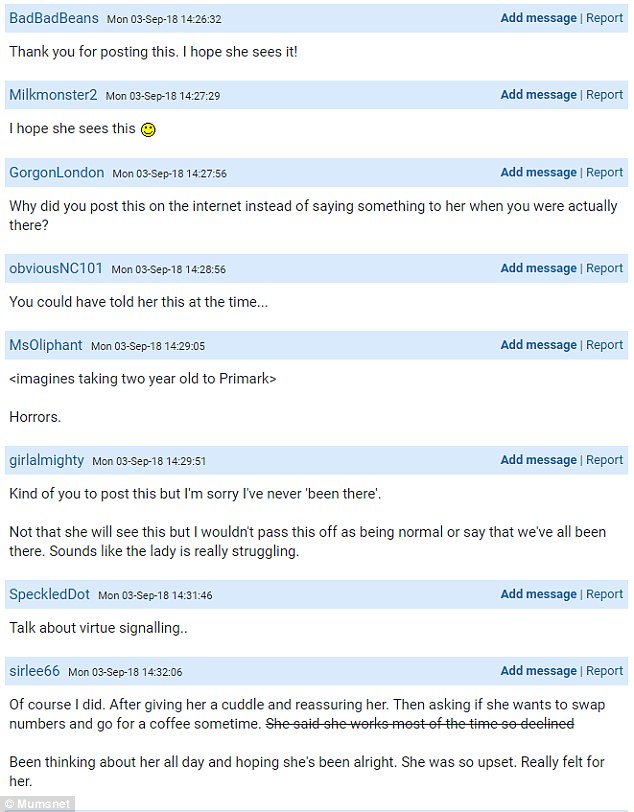 Other mothers quickly flooded the letter with support, with one user writing: ‘Thank you for posting this. I hope she sees it!’ while others praised the mum for taking her child to the busy store 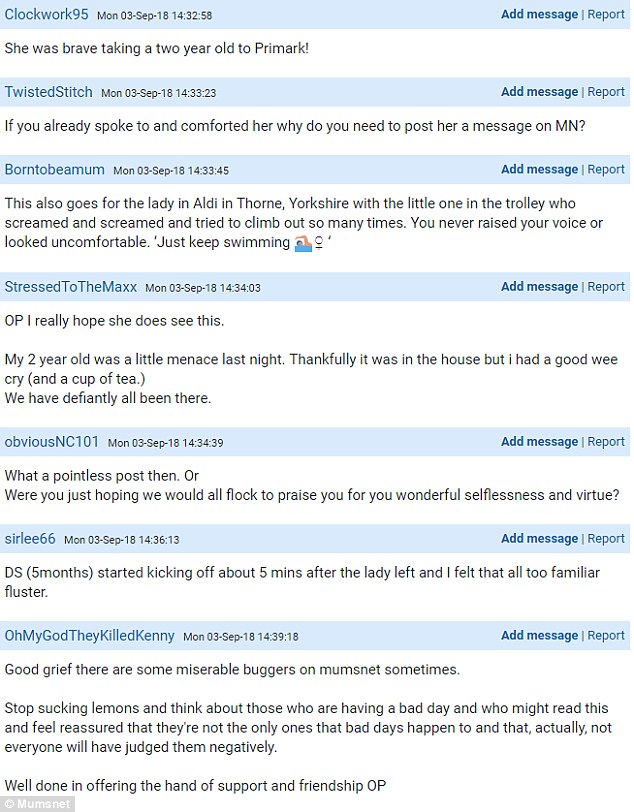 Sharing her own experience, another mother admitted she had a cry and a cup of tea after her 2-year-old was being ‘a little menace’, praising the woman’s supportive message 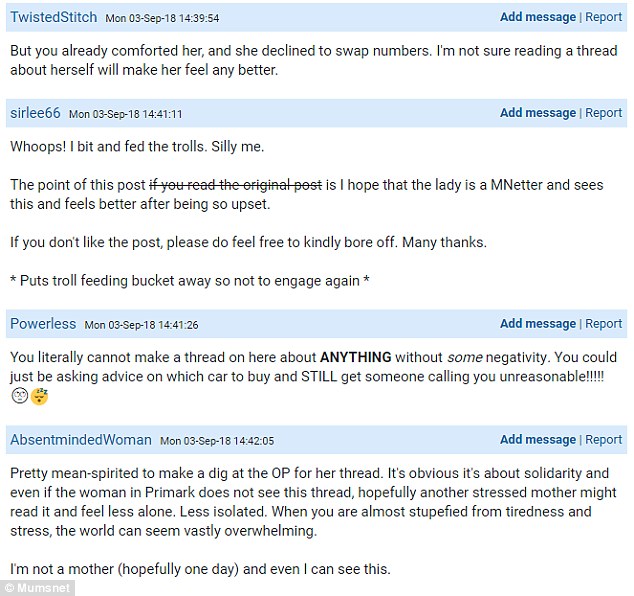 Agreeing, another woman wrote: ‘I think that this post is not just about the lady that the OP saw today in Primark but to every other mum who may be struggling and has perhaps felt like having a melt down themselves.’

Another added: ‘Depression and shame are closely linked a lot of the time. This woman had a very public tearful moment – she’s already probably feeling not great about that.

‘So anything that offers reassurance that she’s still a perfectly normal human being, just having a sh** day, is a positive thing.’

But not everyone was as positive, with some accusing the woman of ‘shaming’ her on the public forum.

‘When I was in the throes of PND (post-natal depression) I would have felt utterly humiliated to read a thread about myself on such a busy forum, especially if I had already politely declined any further contact with the woman involved,’ one said.

Many defended the woman’s open letter against accusations she was ‘shaming’ the mother, arguing that shame and depression are closely linked and should be made less taboo

‘Why did you post this on the internet instead of saying something to her when you were actually there?’ one mother questioned.

Replying, the woman explained that she had approached her, adding:  ‘After giving her a cuddle and reassuring her. Then asking if she wants to swap numbers and go for a coffee sometime. She said she works most of the time so declined.

‘Been thinking about her all day and hoping she’s been alright. She was so upset. Really felt for her.’ 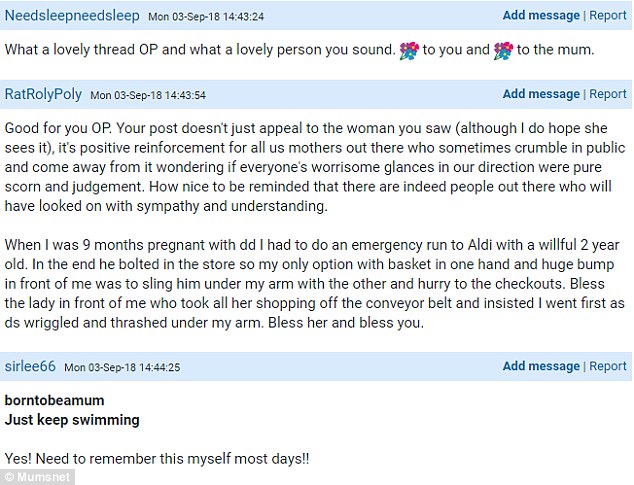 Many flooded the thread with their own experiences of public breakdowns with their toddlers going through the terrible twos, arguing that it was great to give the mother something to relate to 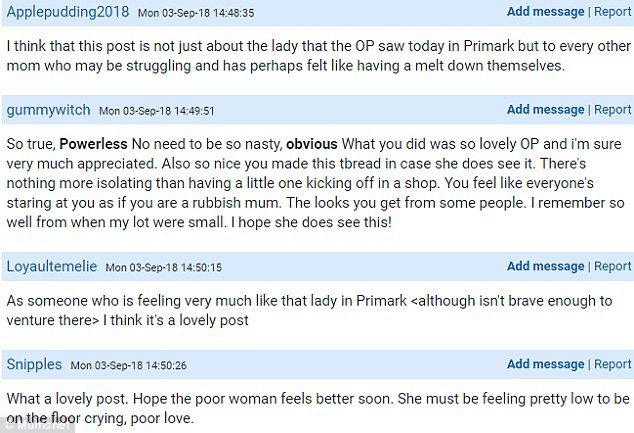 And adding that she had been through a similar situation herself, the woman who kicked off the thread wrote: ‘It was me a couple of months ago. Struggling with PND/A and ended up cradling DS (dear son), howling in Aldi car park’

Six of one of the best: Glasses instances
Can YOU spot the £13 Aldi rug from the designer model?
Summer time cocktails that include extra sugar than a doughnut
Followers are dropping it over Ray J’s shifting hat throughout a scene in Love & Hip Hop
Dancer poses on a pole together with her child son in her arms
The shocking mistake 86 per cent of oldsters make when placing their child in a automobile seat
Wife discovers her Argos wedding ring sold as 18ct gold is FAKE
2018's VERY high-end Christmas hampers including Harrods and Selfridges