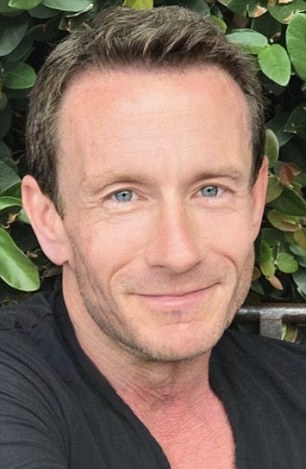 For Michael Danielson, of San Diego, California, the only thing that gave him relief when he was diagnosed was knowing that he could end it all before he reached the final phase. In May, that was overturned. For now it is temporarily in effect, but being debated

Amyotrophic lateral sclerosis is a brutal disease that kills sufferers by gradually shutting down control of every bodily function.

Infecting the nervous system, the incurable disease sets in motion a series of unstoppable events, sometimes swiftly but often slowly over the course of years.

In the later stages, the disease stops their bowel movements, and their ability to swallow.

As anyone with ALS will tell you, it is terrifying, painful, and void of dignity. With no effective treatments there is barely anything to cushion the blow of a doctor delivering the diagnosis.

For Michael Danielson, of San Diego, California, the only thing that gave him a glimmer of relief when he discovered that his muscle twitches were a symptom of this terminal disease was knowing that he could end it all before he reached the final phase, since the End of Life Option Act was passed in October 2015.

He doesn’t want to die, but he would rather go quietly on his own terms.

But this year, he says, he has been forced to step onto the soap box to protest for that right, after lawmakers agreed to overturn the ruling in May because it was passed during a loosely connected but, ultimately, unrelated legislative session – something pro-life campaigners say makes the bill unlawful.

After some back-and-forth it’s been agreed that, for now, it can stay in effect while the bill is reconsidered.

It is unclear, though, what lies ahead.

Today, the American College of Physicians’ medical journal Annals has published a heartwrenching personal essay from Danielson, imploring lawmakers not to keep patients in limbo.

‘[O]ne of the most comforting aspects was that I was going to be in control of my end. I was relieved to know that I did not have to suffer needlessly and indeterminately,’ he writes.

‘The End of Life Option Act afforded me and other terminally ill people the option—and that is a very important word—to have dignity and compassion at the end of our lives. That gave me a great deal of comfort in the past year.’

He adds: ‘Without this law in place, I have to let nature take its course. This is painful… stressful. It’s unnecessary, and it could go on senselessly for a very long time. If anyone wants to contest the law, let them do that. Let us take it to the court system, but keep the law in place while it’s being adjudicated. Playing ping-pong with people’s lives is inhumane.’

The letter, released this afternoon, was written earlier this year, during the weeks of to-ing and fro-ing between Californian judges.

But according Dr David Grube, a retired family physician who is now a leading figure in the movement to legalize assisted dying, the shadow of uncertainty means people like Danielson still live with the fear that their life will end painfully.

‘It’s problematic for patients, their anxiety about whether or not they will be able to have control at the end of their lives or not,’ Dr Grube, National Medical Director of Compassion & Choices in Oregon, told DailyMail.com.

‘I’m very familiar with the fear and the passion and anxiety and pain and suffering you see at the bedside of dying patients. A third of patients don’t use the drugs, but just having them gives them a sense of control. Even more patients just want to be able to talk about it; to know that they have options.’

Beyond California, assisted dying is legal in six states and the District of Columbia. In the other 43 states of America, a doctor who administers lethal medicine to a terminally ill patient risks losing their license.

California passed the End of Life Option Act in October 2015, during a legislative session by Gov. Jerry Brown addressing broader healthcare funding. It came into effect in June 2016.

It wasn’t the sole focus of the legislative session but it was certainly the headline bill. Scores of demonstrators gathered on the Capitol in Sacramento in support of assisted dying, led by Dan Diaz, widower of Brittany Maynard, the young Californian woman who moved to Oregon to end her life at just 29 before it would be claimed by terminal brain cancer. She shared her journey with millions of people via YouTube, explaining that her face and body had painfully swelled, and she was suffering multiple seizures a day. Shortly before she died, she called on California to pass legislation allowing citizens the same right.

However, from the moment the bill passed and beyond, pro-life activists were campaigning to overturn it.

The classic complaint from a pro-life perspective is that it runs against the doctor’s Hippocratic oath to ‘first, do no harm’ (something pro-choicers like Danielson say is the reason to legalize assisted dying – ‘I believe that doctors are doing more harm by keeping terminally ill patients alive needlessly than by allowing them to take control and have a dignified passing of their choice’).

In this case, though, the focus has been on one loophole: that the bill was not directly related to the legislative session at hand.

In May this year, they found an ally in Riverside County Superior Court Judge Daniel A. Ottolia, who overturned it on the grounds that it had not been adequately debated.

California Attorney General Xavier Becerra appealed for the law to remain in effect while it was being debated. Ottolia rejected that appeal, and another three appeals that came from terminally ill Californians.

Just over two months later, Dr Grube says California’s doctors and patients are ‘acting like it’s here to stay’. His focus is on the other side of the country, on New York, New Jersey and Massachusetts, where patients currently have two legal options: cease eating and drinking, or get themselves into a hospital where, if they seem in enough pain, doctors have the right to sedate them until the disease takes hold. The first runs against human survival instinct (‘except,’ Dr Grube says, ‘for the very elderly’). The second is logistically complicated.

But as Dr Grube looks east, Danielson remains cautious back in California.

Though he is not short of support – with a strong network of siblings a niece and nephew, close friends and a trusted medical team – he says he cannot be sure how his life will end, since he does not plan to imminently exercise his right to die, and the bill may well ping back to the other side of the table.

‘[T]his decision was the one last element of control I had over my life. For that to be taken away fills me with great anxiety, because now I do not know how this is going to play out.’

Sick days amongst British staff fall to an all-time low
Why it is best to NEVER refreeze ice cream if it is melted quite a bit
Salt is NOT as dangerous as beforehand thought, research claims
Dr Michael Mosley: Do not let your libido languish... no matter age you might be
Is that this proof that sunbeds could cause most cancers? Mum-of-two, 41, bought pores and skin most...
ASK DR ELLIE CANNON: Is the burning in my mouth a part of the menopause?
Student had to have her thumb AMPUTATED after developing skin cancer from 'biting her nails'
'Harmless' virus carried by half of adults increases a person's risk of heart disease by a fifth