Just weeks after a few of Omarosa Manigault Newman’s secret recordings from the White House were made public, a new report revealed she taped ‘nearly every conversation’ during her time as an aide to the president.

A source, who said they witnessed Manigault Newman make the tapes, told she even captured a conversation that involved ‘all of the Trumps’ in one meeting.

The source told the outlet she carried two cell phones with her – a personal and government-issued device – and hid them inside a purse or pocket when she taped the conversations.

Manigault Newman was also reportedly seemed paranoid and concerned that what ‘happened to Hillary Clinton and her emails (would) happen to her.’

The reality show star ‘wouldn’t write on email or text,’ the source said, while adding that ‘many conversations happened on Facebook Messenger.’ 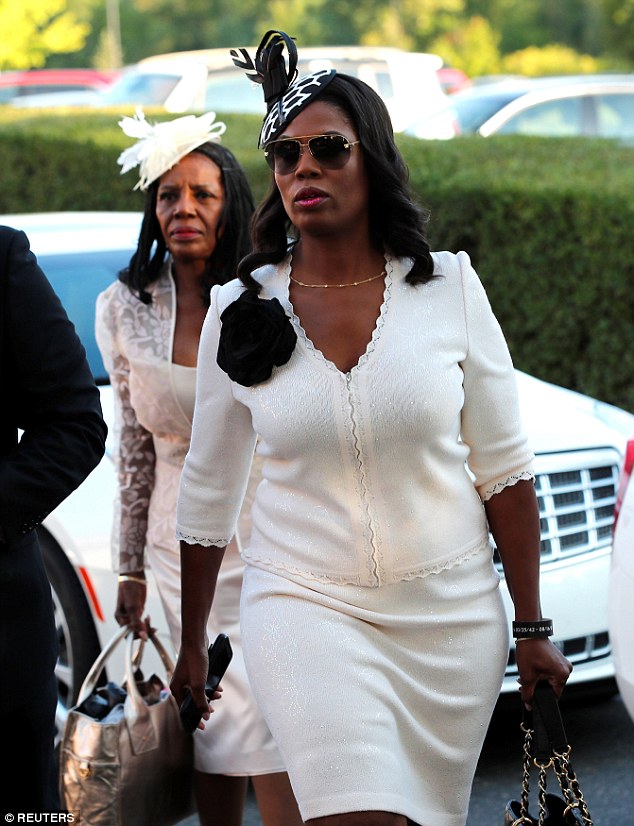 Omarosa Manigault-Newman (seen in Detroit, Michigan on August 31, 2018) reportedly recorded ‘nearly every conversation’ she had during her time in the White House 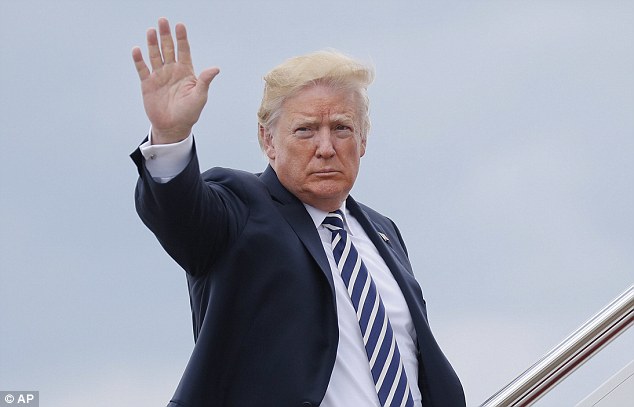 A source, who said they witnessed Manigault Newman make the tapes, told Axios she captured a conversation  with ‘all of the Trumps.’ President Trump boards a plane Friday, August 31, 2018 as he prepares to travel to Charlotte, North Carolina

Manigault Newman said the recordings were a form a protection and means of reference.

One of the conversations exposed last month was Manigault Newman’s firing by chief of staff John Kelly in the high-security Situation Room.

Parts of the were played on the air during an appearance on NBC’s ‘Meet the Press’ to promote Manigault Newman’s new book, ‘Unhinged,’ which has seen a slump in sales.

The tell-all memoir from the controversial reality star released on August 14, and dropped more than 40 percent in sales this week.

The recording took place in the room that is a Sensitive Compartmented Information Facility. Staff are not permitted to bring in cell phones or other recording devices.

Small lockers have been positioned outside the door so aides can securely leave prohibited devices during critical meetings. 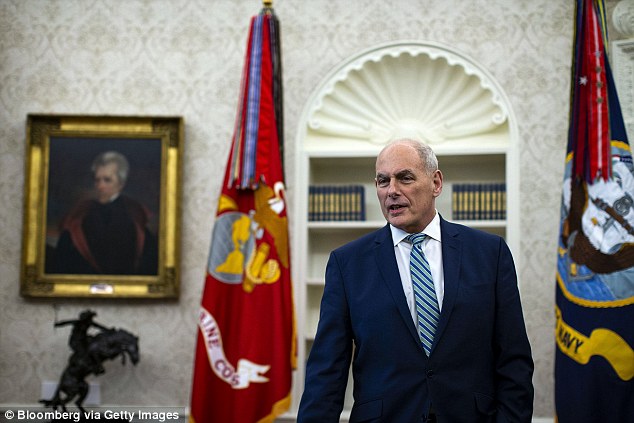 The former White House aide said she made a recording with John Kelly in the Situation Room. Kelly is seen in the Oval Office of the White House in Washington, D.C. on Monday, August 27, 2018 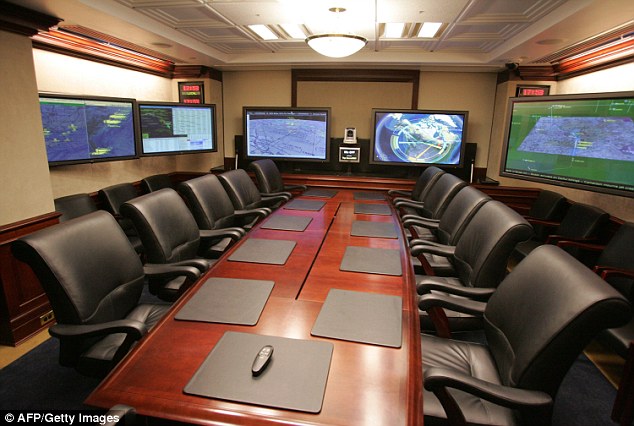 Manigault-Newman received backlash after the secret recordings were revealed, as many argued she is a threat to national security and may have broken federal law.

President Trump also slammed the former aide on Twitter August 13: ‘Wacky Omarosa, who got fired 3 times on the Apprentice, now got fired for the last time. She never made it, never will. She begged me for a job, tears in her eyes, I said Ok. People in the White House hated her. She was vicious, but not smart. I would rarely see her but heardreally bad things.

‘Nasty to people & would constantly miss meetings & work. When Gen. Kelly came on board he told me she was a loser & nothing but problems. I told him to try working it out, if possible, because she only said GREAT things about me – until she got fired!’

He wrote further: ‘While I know it’s “not presidential: to take on a lowlife like Omarosa, and while I would rather not be doing so, this is a modern day form of communication and I know the Fake News Media will be working overtime to make even Wacky Omarosa look legitimate as possible. Sorry!’ 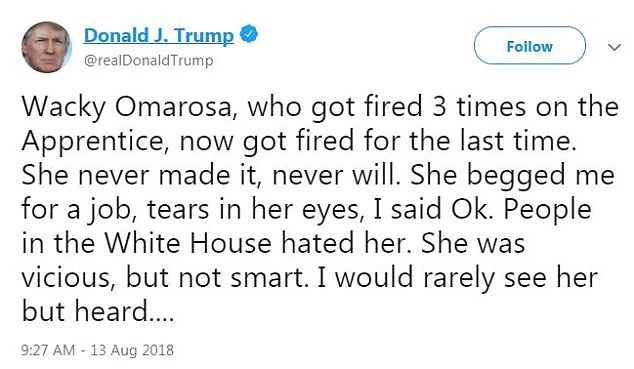 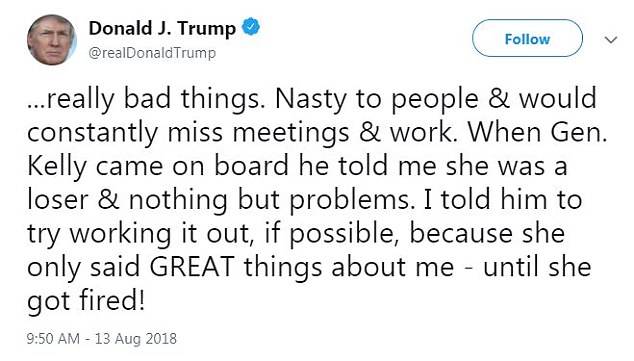 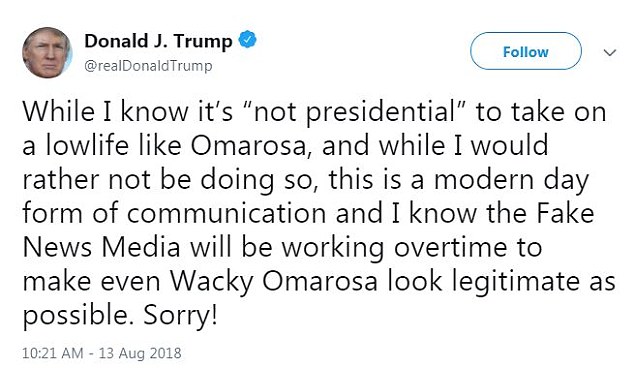 President Trump sent out these tweets about Manigault-Newman August 13 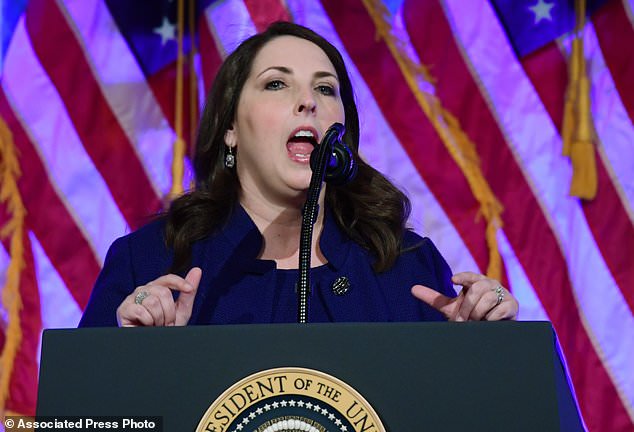 McDaniel raised the possibility of criminal prosecution for Manigault Newman

OMAROSA MANIGAULT NEWMAN: Hi there, how are you?

JOHN KELLY: Who are you?

JOHN KELLY: Could you leave us alone?

JOHN KELLY: I’m only going to stay for a couple of minutes. These are lawyers. We’re going to talk to you about leaving the White House. It’s come to my attention, over the last few months, that there’s been some pretty, in my opinion, significant integrity issues related to you and use of government vehicles and some other issues. And they’ll, they’ll, they’ll walk you through the legal aspects of this. But there is some, from my view, there’s some money issues and other things, but from my view, the integrity issues are very serious. I’m stuck with my past experience and that is, when we hold people accountable in the military, I would, I compare what I see here at the White House and other issues that I’ve had to deal with and say what would I do to this, in this case if I was in the Pentagon dealing with a Marine or a soldier or something like that? And the issue that you may or may not have a full appreciation for, but I think you do, this would be a pretty high level of accountability, meaning a court-martial. We’re not suggesting any legal action here.

OMAROSA MANIGAULT NEWMAN: That I — that I did?

JOHN KELLY: Just stay with me, just stay with me. Yep. That it would be a a pretty serious offense. So with that I’m just going to ask you — these gentlemen will explain it. We’ll bring a personnel person in after after they talk to you. But just to understand that I’d like to see this be a a friendly departure. There are pretty significant legal issues that we hope don’t develop into something that, that’ll make it ugly for you. But I think it’s important to understand that if we make this a friendly departure we can all be, you know, you can look at, look at your time here in, in the White House as a year of service to the nation. And then you can go on without any type of difficulty in the future relative to your reputation. But it’s very, very important I think that you understand that there are some serious legal issues that have been violated. And you’re, you’re open to some legal action that we hope, I think, we can control, right? So with that, if you would stay here with these gentlemen they’ll lay this thing out –

JOHN KELLY: Don’t do — let’s not go down the road. This is a non-negotiable discussion.

OMAROSA MANIGAULT NEWMAN: I don’t want to negotiate. I just, I’ve never talked — had a chance to talk to you General Kelly so if this is my departure I’d like to have at least an opportunity –

JOHN KELLY: We can, we can talk another time. This has to do with some pretty serious violat — integrity violations. So I’ll let it go at that. So the the staff and everyone on the staff works for me, not the president. And so after your departure I’ll inform him if he gets interested on, on where you may be. So with that I’ll let you go and if gentlemen you could take it. 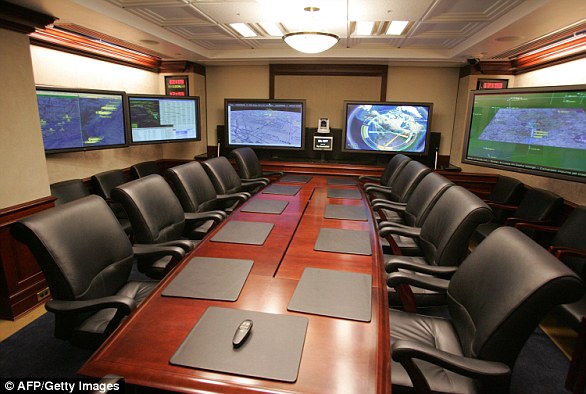 Terminally ill Dance Moms star Abby Lee Miller leaves rehab after months of recuperation
Lion Air crash: First pictures emerge of passengers on board doomed jet
Trump's inaugural committee spent $1.4million at his OWN DC hotel
Trump says Jeb's son is the 'Bush that got it right' in slap at family in Texas
Collection of 80 Porsches left severely damaged in North Carolina gas explosion
Same-sex mothers reveal photos of them breastfeeding their newborns together
EU 'to sign off Brexit flextension': Brussels is hopeful a Brexit date of January 31
Coronavirus US: Trump shakes hands repeatedly at conference