It’s perhaps a little unorthodox for a footballer, at the age of 34, to be looking up to role models. It is a sign of the times, then, that Glenn Murray has an abundance of examples to follow, even within the Brighton changing room.

Turning 35 later this month, Murray is the ‘s current poster boy for longevity, thanks to his success in front of goal.

He scored twice on Saturday to help Chris Hughton’s side rescue a point against Fulham. It was his 15th goal since the start of last season. Only six players in the division have scored more, and only Jamie Vardy out of them does not play for a top six side. 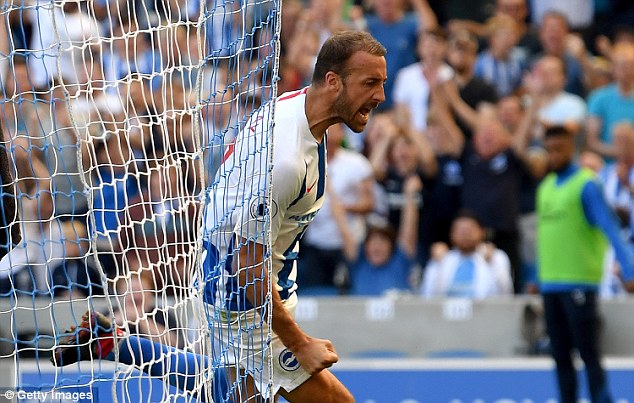 It is a laudable return for a forward who has spent the vast majority of his career outside of the top tier, his first appearance in the division not coming until he was 30.

At Brighton, he only need look across the training pitch at 37-year-old full back Bruno to realise what can be achieved even at his age.

Indeed, Murray is aware of a host of strikers, from Peter Crouch to his former Crystal Palace team-mate Kevin Phillips, who prove the peak of a player’s career can no longer be defined by their age.

‘I look at Bruno first hand every day he trains. Does as much running as everybody at the club,’ said Murray.

‘He looks sharp, looks good. I look at him, he’s three years older than me, and I think ‘Why not?’ ‘I also look at Peter Crouch and I feel as though that maybe even when a striker is not up for 90 minutes or a manager doesn’t feel he’s capable of 90 minutes, I think a striker is always capable of bringing something from the bench. 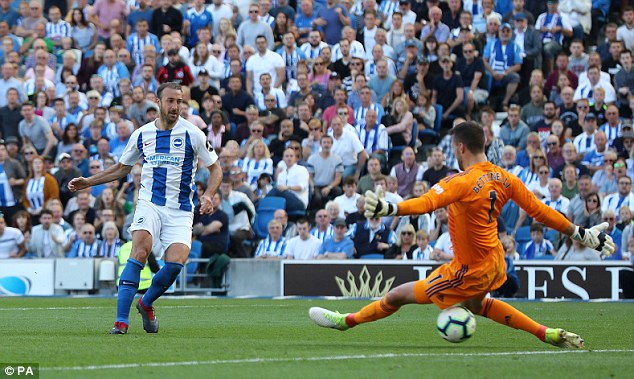 ‘One that I played with was Kevin Phillips and he got us promoted to the Premier League with Palace. He was 39.

‘I take heart from players around me. I look at Jermain Defoe down at Bournemouth who looks as sharp as ever. Why can’t I play on?’

It’s a prescient point. With the advances in sports science, and in a player’s willingness to try new approaches to get the most out of their bodies, the horizon of retirement has been pushed back for many.

Murray admits he has even turned to yoga to ensure he stays as flexible as possible.

‘Do I do yoga? Yeah,’ he said. ‘As a club develops I think more becomes available for a player and I think I just try an take on everything that I can.’ ‘Obviously we’ve got a lot of science behind football these days and we’ve got a lot of people that can advise us on how best to look after our bodies.’ 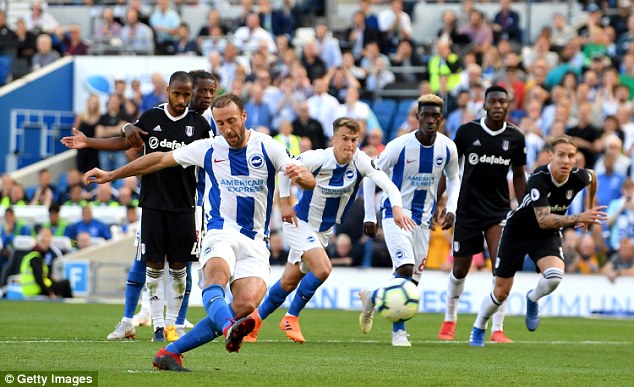 RUSS GOLDMAN (cottagersconfidential.sbnation.com): Fulham were taken to school with two costly mistakes which allowed Brighton to take full advantage. I would have taken a draw before the match but this was a disappointing two points dropped. STAR MAN: ALEKSANDAR MITROVIC

SIMON COX (brightonfans.com/new):  Usually if you come back from two goals down and draw, you are happy. Not today. Fulham are good in midfield, great in attack but their defenders are clowns. We had them on toast but squandered chances, missed a penalty and gave away goals. STAR MAN: GLENN MURRAY

Boss Chris Hughton is all too aware of the benefits. He can see his striker, keeping the likes of £14m Jurgen Locadia out of the starting line up, is making the most of the modern game, a chance the former Republic of Ireland defender would never have got in his day.

‘He’s a very good professional,’ said Hughton. ‘He certainly looks after himself as regards how he goes about his life, what he eats, his preparation. So he does everything right.

‘The modern-day professional has more around him, more support to play longer. In my day there was 11 players and one sub and even when there were two subs you were playing game after game after game.

‘There is more rotation now. Medically, players are looked after better. But every player is different. Some are capable of playing longer and I think you will find far more players will play longer.’

While Hughton had his old head to thank for the point, it was the inexperience of youth that perhaps cost Fulham all three points at the Amex, Aleksandar Mitrovic undoing the hard work grabbing his side’s second by needlessly giving away the penalty that helped the hosts draw level.

The Serbian was adamant that the ball had not touched his arm, but replays begged to differ. It was tough on a Slavisa Jokanovic’s side who’s key players had dazzled for large parts of the game, none more so than Jean Michael Seri.

The summer signing from Nice started the move for Andre Schurrle’s superb opener, before rejoining the move to find the German with a delightful flick over the Brighton defence. It is the kind of creativity Mitrovic and his team-mate’s will thrive on this season.

‘We a lot of fast players that can give the final ball, and have good vision,’ said the 23-year-old. ‘I like playing with these players. They made my job easier. I hope we will continue to play together like this.

‘If I have good players with me, I will always score goals.’

Glenn Murray is now Brighton’s third-top goalscorer of all-time, moving on to 97 goals. He has spent just five full seasons at the club, and started his most recent stint in 2016 at the age of 32.

Robin Goodfellow's racing ideas: Greatest bets for Saturday, August 18
Stoke 0-Three Wigan: Will Grigg nets brace as Gary Rowett's Potters stay with no win
Souness insists Mourinho's temper is in charge for United's poor begin
Mohamed Salah revives dispute with Egypt soccer authorities
Aleksandar Mitrovic reveals how the gym helped in football before shedding light on his childhood
Liverpool have Brazilian trio available for Tottenham game after rushing them back from Brazil duty
Family of Enzo Calzaghe, 69, reveal he is 'very poorly'
He scored against Newcastle but he is too often Ozil the ordinary