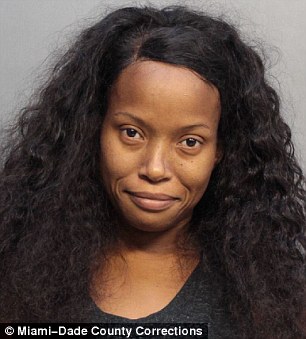 Candi Nicole Johnson, 34, lashed out during her court appearance on Sunday

A Florida woman accused of shooting the foster mother of her two children has been ordered to be detained without bond.

But as Candi Nicole Johnson, 34, was ordered to stay away from her children in a court on Sunday, she erupted in outrage and lashed out at the judge.

She was charged with attempted first-degree murder with a deadly weapon, two counts of kidnapping with domestic violence, and one count of armed burglary, according to .

At first Johnson hung her head as she was brought into court sitting in a wheelchair.

‘Corrections; do you have an indication – is she medicated? She is not? So she’s just looking down because she wants to? … It’s not that she’s looking down due to medication, correct?’ Judge Samantha Ruiz Cohen asks in the courtroom video.

Then Ruiz Cohen reads out her order. 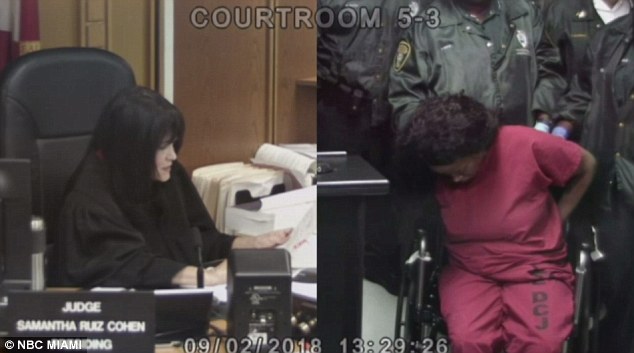 At first Johnson appeared in court with her head hung and in silence. But when Judge Samantha Ruiz Cohen barred her from seeing her children, she lashed out 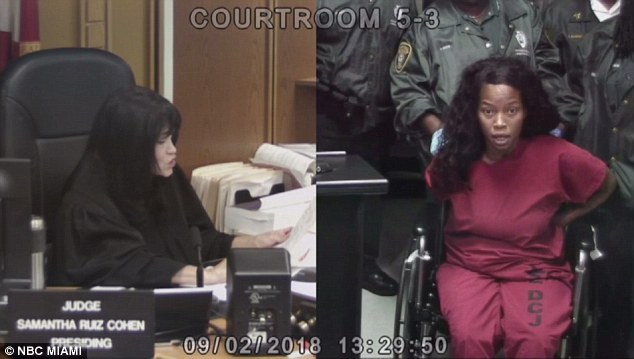 When Ruiz Cohen says: ‘You must stay at least 500 feet away from all three victims’ Johnson looks up in shocks and says ‘You’re getting to be really aggravating’

‘If for any reason in the future you’re given a bond, you must stay at least 500 feet away from all three victims – I see that you’re looking up,’ Judge Samantha Ruiz Cohen said shocked with Johnson’s reaction.

Upon hearing her order she looked up and said ‘You’re getting to be really aggravating’ before the public defender quickly shut off her microphone.

Ruiz Cohen seemed concerned with Johnson’s angry reaction but said ‘I understand’ and continued to read out the order that banned her from going near the victims and from bearing a firearm.

All the while Johnson is seen ranting incessantly, but no one can hear her, showing a drastic change in behavior from her initial silence.

At the end of the video Ruiz Cohen repeats: ‘Yes I have now ordered her and I see that she’s looking up at the court. I’ve ordered her to stay away from all three victims.’

Upon hearing those words, Johnson seems to blurt out the f-word.

Eventually she is wheeled away, still ranting at the judge. 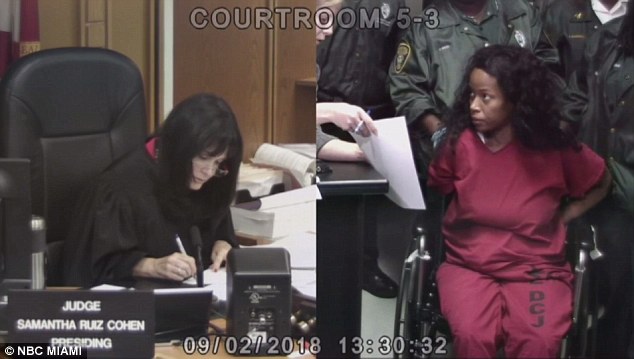 Immediately after her comment her public defender turned off her microphone but she continued to rant to herself, clearly upset about her order 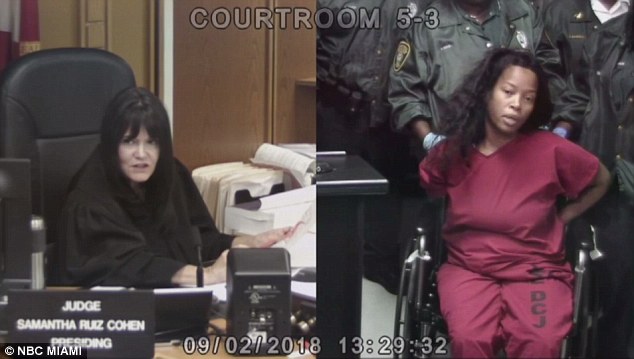 On Friday an armed duo broke into the home of her children’s foster mom Wendy Edmond, 77, and shot her multiple times then took the kids. Cops found the kids in Johnson’s home but she doesn’t have legal custody of them 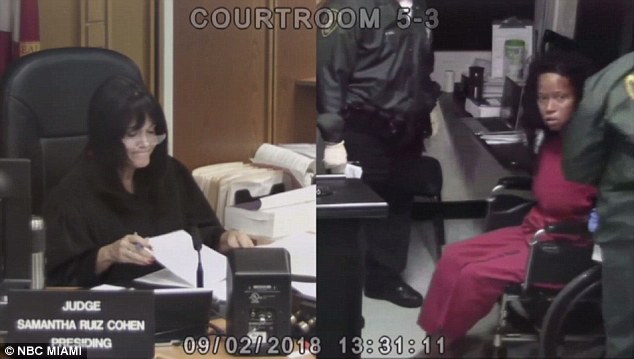 She is charged with attempted first-degree murder with a deadly weapon, two counts of kidnapping with domestic violence, and one count of armed burglary, pictured above being angrily wheeled out of court on Sunday

On Friday August 31 an armed woman and a man entered the home where Johnson’s biological children – a five-year-old girl and a one-year-old boy – lived with their foster family in Miami-Dade around 5am.

The duo took the children and shot the 77-year-old foster mother Wendy Edmond several times then took off in a white sedan.

The foster mother was taken to Jackson South Medical Center and is in stable condition, according to the

Cops later found the children in Johnson’s home in Miami Shores after the kids were reported missing.

The children were taken into the custody of the Florida Department of Children and Families.

‘The horrific attack on this foster mother is unfathomable. We have been in contact with the victim’s family and will continue to provide support as she recovers,’ DCF said in a statement.

Johnson does not have legal custody of the children.