SOUTHAMPTON, England (AP) – India requires 245 runs to win the fourth test after bowling England out for 271 early on day 4 at Southampton on Sunday.

England resumed its second innings on 260-8, but was able to add just 11 runs as Stuart Broad and Sam Curran fell quickly.

Broad (0) was caught behind off his – and the day’s – first ball, leaving Mohammed Shami (4-57) on a hat-trick after the India paceman had removed Adil Rashid with Saturday’s final delivery. 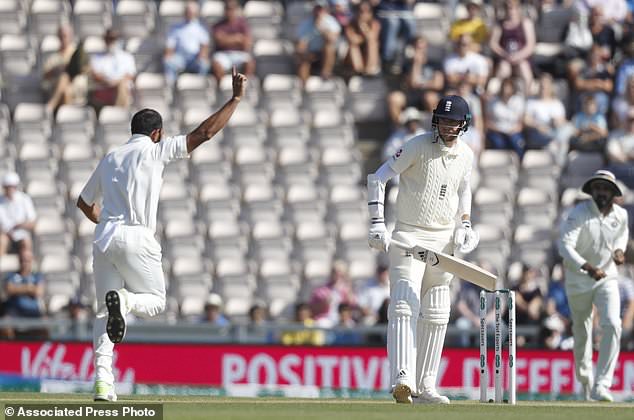 England’s Stuart Broad edges the ball and is caught behind first ball off the bowling of India’s Mohammed Shami, who celebrates, left, during play on the fourth day of the 4th cricket test match between England and India at the Ageas Bowl in Southampton, England, Sunday, Sept. 2, 2018. England and India are playing a 5 test series. (AP Photo/Alastair Grant)

Curran was seeking to make his second half-century of the match but was run out for 46 as he attempted to keep James Anderson (1 not out) off strike.

India had established a 27-run first innings lead as Cheteshwar Pujara’s unbeaten 132 guided the tourists to 273 in response to England’s 246.

India is seeking to level the five-match series at 2-2. England won the first two tests at Edgbaston and Lord’s before India struck back in Nottingham.