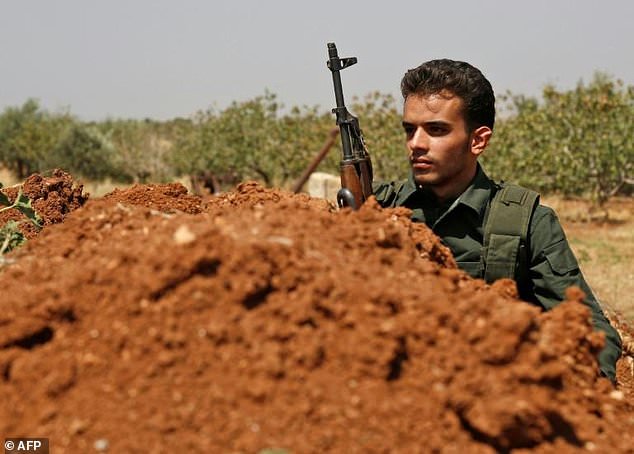 A Syrian rebel fighter in Kafr Zita on August 30, 2018, as rebels prepare for a regime assault on Idlib province

Rebels from Idlib have blown up two key bridges in a bid to hamper an expected government assault on Syria’s only remaining rebel-held province, a monitor said on Friday.

The bridges over the Orontes River linked areas of neighbouring Hama province under government control to rebel-held territory in Idlib, the Britain-based Syrian Observatory for Human Rights said.

They were blown up by Islamist factions from the National Liberation Front (NLF), the main non-jihadist alliance in Idlib, Observatory head Rami Abdel Rahman said.

“They were the two main bridges in the area, but there are others,” he told AFP.

The bridges were located in the Al-Ghab plain, which straddles Hama and Idlib provinces and could be one of the first targets of any government offensive.

Government forces have been massing around Idlib province for weeks, particularly in Al-Ghab which was once a key farming area.

“The rebels have seen the intense activity on the regime side, with the arrival of tanks and armoured vehicles,” Abdel Rahman said.

“Rebel groups are reinforcing their positions in anticipation of a military operation.”

In recent days, both the government and its ally Russia have stepped up their rhetoric against the rebel presence in Idlib, which is dominated by the Hayat Tahrir al-Sham (HTS) jihadist alliance formed by Al-Qaeda’s former Syrian branch, Al-Nusra Front.

“The Syrian command has taken a decision to defeat Al-Nusra Front in Idlib no matter the sacrifices that it would entail,” Foreign Minister Walid Muallem said on Thursday.

On Wednesday, Russian Foreign Minister Sergei Lavrov called on the West not to stand in the way of an “anti-terror operation” in Idlib, saying: “This abscess needs to be liquidated.”

Turkish troops are also stationed in the area and Ankara — which backs the NLF — has expressed opposition to any large-scale offensive that sparks a new exodus of refugees.

An assault on Idlib by Damascus and Moscow could be the last major battle of the civil war that has torn Syria apart since 2011.

More than 350,000 people have been killed in the conflict and millions forced to flee their homes.

Apology issued as 1,761 women not invited for final...
Comedian Jeremy Hardy dies of cancer aged 57
Cosmopolitan editor FARRAH STORR reveals she decided to turn her back on motherhood
Police arrest a third teenager, 17, over the death of a 16-year-old schoolboy
Dani Dyer's mum feared her daughter would take her own life after a previous relationship ended
NASA will allow TOURISTS aboard the International Space Station starting in 2020
Price of a funeral in 2020 is £4,417 - but a budget cremation is far less
Victoria's deadly second wave SPREADS to NSW