Male crop tops are the latest bizarre trend to sweep the fashion world, and two Good Morning Britain presenters bravely tried to pull them off on Thursday’s show.

Stand in showbusiness correspondent Joe Swash was talked into trying one on by GMB presenter Kate Garraway, and gamely whipped off his cardigan to reveal a skimpy white top.

The camera then panned to weatherman Alex Beresford, who was wearing a matching top that showed off his muscular frame.

The moment left viewers in stitches, with one tweeting that it had ‘made their morning’. 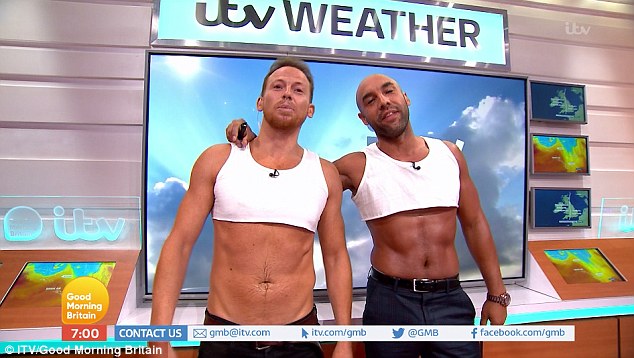 ASOS caused a stir this week when a stomach-flashing crop top for men went on sale, drawing comparisons to women’s sports bras.

GMB brought the very same crop to in for EastEnders actor Joe to put on, and he was happy to oblige.

He said: ‘I’m very comfortable with my body, I tried to convince Alex but he weren’t having it.’

Joe started pulling a few jokingly sexy poses as Sexy and I Know It by LMFAO began to play. 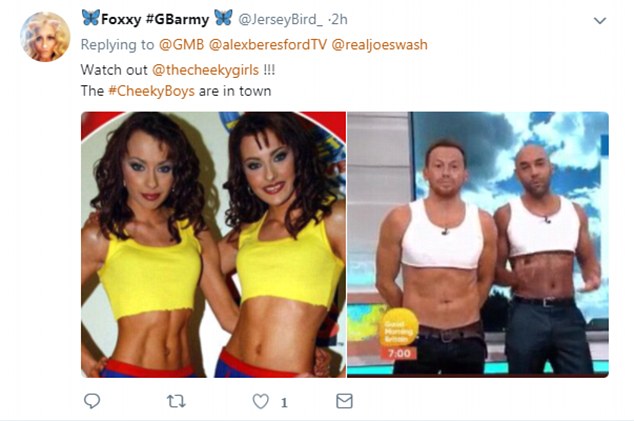 The moment left Good Morning Britain viewers in stitches on Twitter (picture), with one tweeting that it ‘made their morning’ and others comparing them to the Cheeky Girls

‘You’ve got to be very careful though because it’s very close to the old nipple,’ he added.

‘The big thing is we tried to convince Alex to do the weather in a crop top and he was adamant. He’s too shy.’

However the camera suddenly panned to Alex sitting as his desk in the same crop top, which showed off his toned arms and rippling abs.

Kate wolf-whistled as Alex sulkily got up and stood in front of his weather screen. 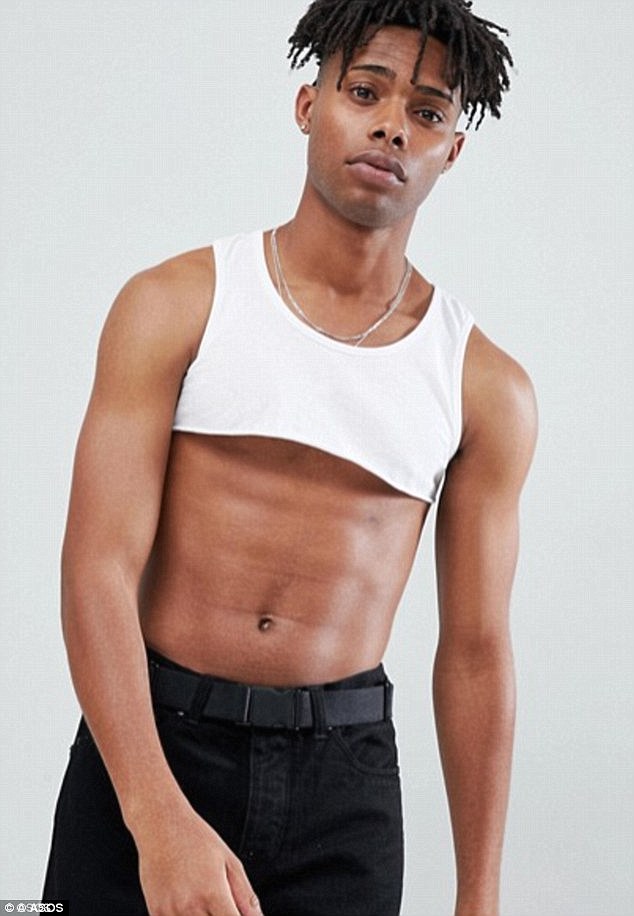 UK-based online retailer ASOS has unveiled a £10 crop top for men (pictured).  The ultra crop top barely covers the nipples and exposes most of the back 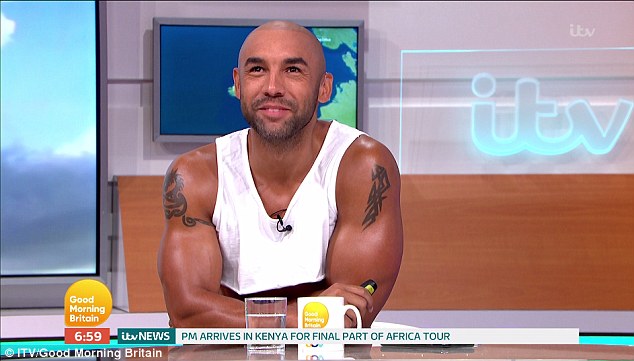 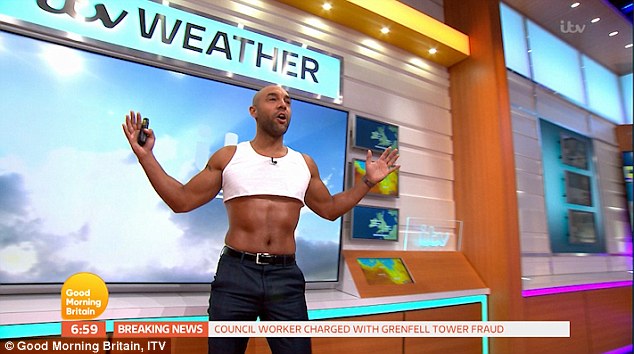 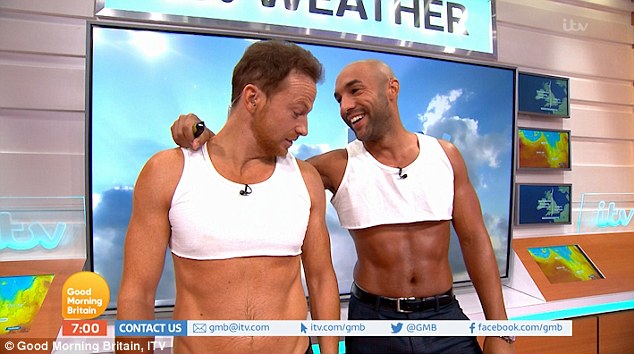 Kate Garraway wolf-whistled Alex as he joked that it was ‘on air bullying’ after he was convinced into wearing one. Pictured: Joe and Alex in their crop tops on Good Morning Britain

He said: ‘This is on air bullying, I’ve been bullied into this.’

Joe walked over and gave Alex a hug to comfort him and they presented the weather together.

‘Is it going to be a cold front?’ Joe joked.

Joe stood by Alex’s side as he read the forecast, attempting to join in by waving his hands around the screen.

When Alex said it was going to be warm in the south Joe joked that it would be ‘perfect crop top weather’ before wiggling his hips. 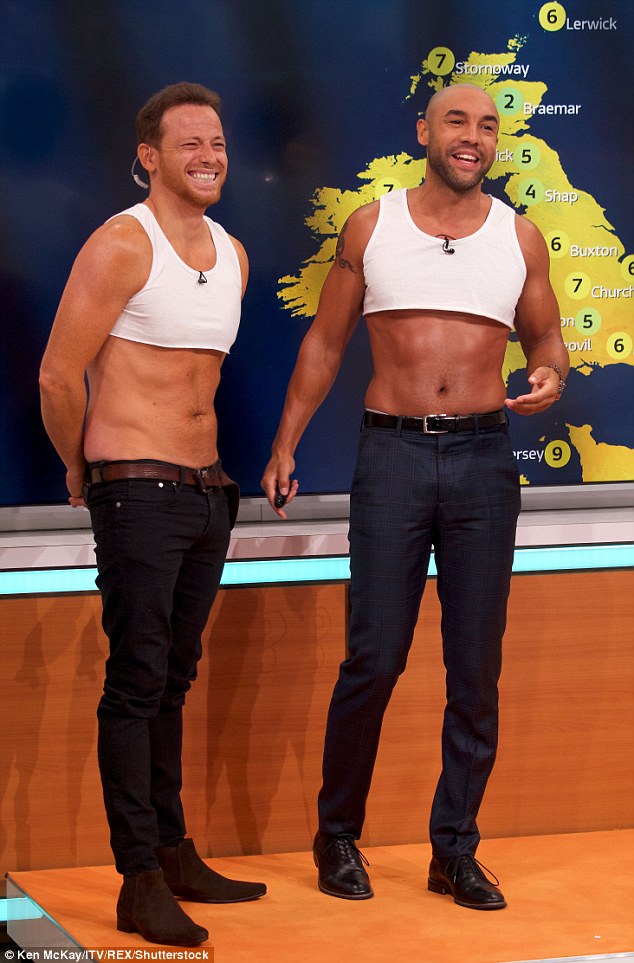 Joe went and stood next to Alex while he read the weather (pictured), with the weatherman joking that he couldn’t wait for it to end 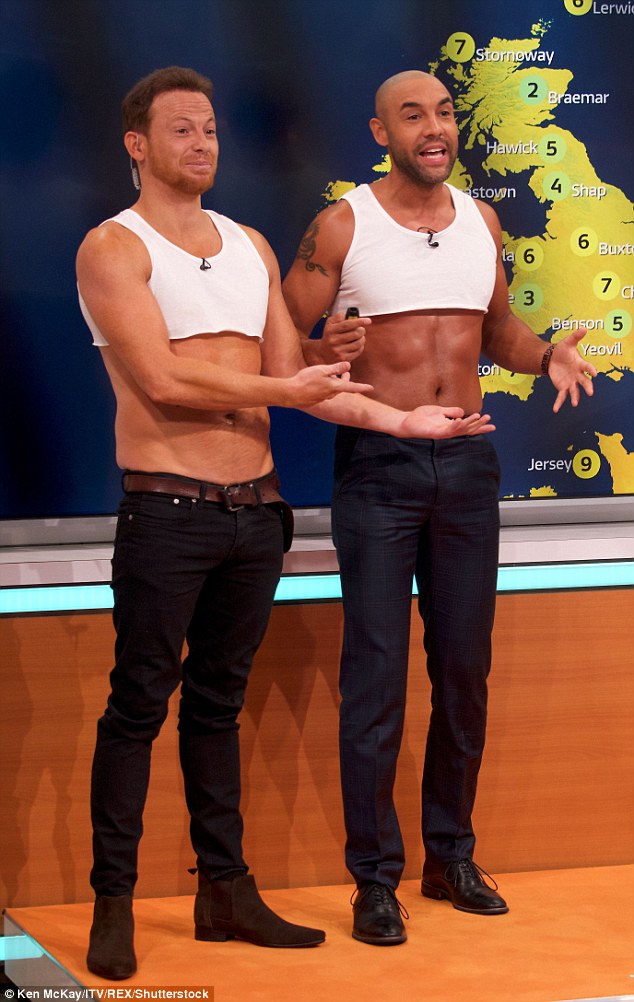 Alex was clearly embarrassed by the situation, saying: ‘I’ve never wanted them to cut the weather short on this programme but today is a first. That’s your weather’.

Viewers found the moment hilarious, with many taking to Twitter to praise Joe and Alex for the stunt.

One tweeted: ‘Wow, what a way to start my morning thanks guys x.’

‘Well that just brightened up my morning,’ another posted.

A third said: ‘What a way to start your morming watching the weather like that!! [sic]’

Can YOU spot the £13 Aldi rug from the designer model?
Wellness guru reveals how she's launched Glow Bar which is set to have a £1m turnover
Bohannah and Tye Gerritsen go travelling around Australia with children in caravan
Two years after Paul Daniels’ death his widow Debbie makes a brave admission
My lightbulb moment: Designer Jade Holland Cooper
Madeline Stuart wants to be first model with Down Syndrome to walk Victoria's Secret Fashion Show
Sophie Guidolin shares throwback snap to prove lifting heavy weights is the key to flawless physique
Mother reveals her ex had their baby daughter's ears pierced in secret